Next up on the blue line… 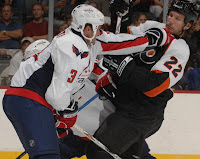 Theme: “What we see depends mainly on what we look for.”

Tom Poti came to the Capitals in 2007-2008 with certain expectations – a power play specialist (6-26-32 in power play scoring in 2006-2007, 11th in the league among defensemen), not an especially big hitter given his size (tied for 111th in the league among defensemen in 2006-2007), occasionally a liability in his own end (a minus player in five of his last six seasons entering this one).

If you look at Poti’s ten game splits, your disappointment in his performance (if that’s what you’re looking for) might be confirmed, to a point…

He had only those two goals, and he only had more than five points in a split once. But look a little harder. As with many Caps, his was two seasons. The “Hanlon”/”Boudreau” segment comparison is useful, but in Poti’s case, it is almost more an “injured/not injured” split.

As far as expectations go, we can dispense with the hitting category right away. Poti was not a big hitter with the Caps any more than he was the year before on Long island. He finished tied for 159th in the league among defensemen in that category. While hitting has is uses and places, it is not the be-all or end-all of defense (we’ll get to that with Jeff Schultz later). Poti was second on the team among defensemen in plus-minus, second in total scoring, and second in average ice time.

Conversely, while Poti was only 0-6-6 at even strength with the Islanders in 2006-2007, he was 2-19-21 at even strength with the Caps this past season. The switch from emphasis on the power play to that of play at even strength looked to be reflected in his shots. The 99 shots on goal he registered was his lowest in the NHL since his rookie year in 1988-1999. On an average shots-per-game basis, he was down about 20 percent (1.39 shots-per-game last year versus 1.72 the year before). He was more “stable” than “specialist.” It was not a case of failing to achieve expectations than it was his carving out a different set of them.