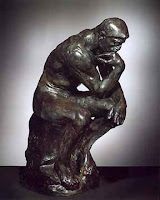 There are 25 games left in the regular season. It’s gone by quickly, hasn’t it? It seems only like last week when the Caps were arriving at Kettler Capitals Iceplex for training camp. But here we are, and with those 25 games left, it might be interesting to sit down and take a look back to last year.

You might think that last year is the standard for 25 game finishes in Caps history. Here is what they did…

However, the Caps have something of a history as a team with a big finishing kick in the regular season. Here are their biggest finishes (30 or more points in their last 25 games)… 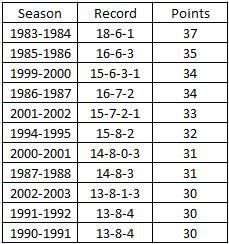 The 1983-1984 team is the standard here. After 50 games (there being an 80-game season in those days), the Caps were 30-21-4, but had just thrashed the Edmonton Oilers, 9-2, to win their fifth straight game and finish their ninth straight game without a loss.

That 1983-1984 team was, in some respects, the 1980’s version of the current crop. It was a group that was in its second year of success (the previous year having earned 94 points), just as this one is (last year’s team earning… 94 points). It had a young goal scorer who would go on to the Hall of Fame – Mike Gartner (40 goals that season). It had a young Swede who was an adept playmaker and was a somewhat underrated defensive player – Bengt Gustafsson. It had (actually obtained during the year) a young defenseman who could score – Larry Murphy.

What the Caps didn’t do that year that people this year almost expect is to advance far in the playoffs. After sweeping the Philadelphia Flyers in three games, the 1983-1984 edition of the Caps lost to the New York Islanders in the second round.

But we digress. The point is that the last 25 games of the year is a stretch of games that the Caps have found to their liking in past years. 11 times, they have reached 30 points in the last 25 games, six times they have won at least 15 of those last 25 games. If the Caps can reach the average of those 11 seasons as they finish the season – 32 points – not only will they allow us to break the thermometer over there on the right, they will set a franchise record for points (109).

Something to watch and (hopefully) to look forward to.
Posted by The Peerless at 12:26 PM

Email ThisBlogThis!Share to TwitterShare to FacebookShare to Pinterest
Labels: history

Seems like we're being compared a lot to the '84-'85 Caps. Let's hope that comparison isn't prophetic, and that we go further in the playoffs than they did.

I was at that Edmonton game. As I recall Gretzky was injured and didn't make the trip, and the Caps obviously took advantage. I missed three goals during one trip to the restroom. Lesson learned. Now I just pee in my seat.

Anyway I was just trying to figure out whether or not those goals were all for the Caps as I seem to remember they were, and then what the Capitals record is for fastest three goals in a game (whole team, not individual). Interestingly enough I discovered that the fastest three goals by both teams in the Oilers' history was earlier in the '83-'84 season, on November 2 against the Caps, when Edmonton got two and the Caps one in 27 seconds, which I assume is the equivalent record for the Caps too, but I can't find the record for fastest three Caps goals. Any help?

@aj: Um, where do you sit? I'll make sure never to get tickets there.