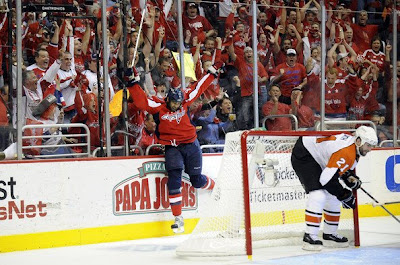 Theme: “a distinction without a difference”

The Caps were 37-26 (losses including extra time defeats) with Donald Brashear in the lineup this past season. They were 13-6 in his absence. This is not the result one might be looking for in a difference maker. Looking at his ten-game segments, he registered at least ten penalty minutes in six of seven segments (he did not play in the last 14 games of the regular season), was a minus player in five of seven segments, did not register a point in the last 50 games of the regular season after December 16th, and scored his only goal on December 4th…

With respect to enforcement duties, Brashear played in ten games in which he earned a fighting major (he had two in a December 20th game against the Flyers). The Caps were 5-3-2 in those games. More to the point is where those penalties came in those games:

Oct. 25 (vs. DAL): 15:59, 2nd period. This penalty came immediately after the faceoff following a Dallas Stars goal that made the score 4-3. There would be no more scoring in that second period. The teams traded a pair of goals each, the last being Alexander Semin’s game-winner in overtime in a 6-5 win.

Nov. 22 (vs. SJS): 3:24, 1st period. If one of the reasons for fisticuffs is to grab momentum or give your team a charge, this didn’t so it. San Jose scored three goals after this in the first period and never looked back in a 7-2 win.

Dec. 20 (vs. PHL): 7:38, 1st period; 12:03, 3rd period. The first battle of two battles in this one – both against the Flyers’ Riley Cote – came with the Flyers already ahead, 1-0. It was lost in a 25-shot barrage the Caps leveled at Flyer goalie Antero Niittymaki. The second scrap might have been of the “frustration” variety, the Flyers having built a 6-1 lead by the time Brashear and Cote went at it again. The Flyers won, 7-1.

Jan. 27 (vs. BOS): 9:39, 3rd period. Brashear was the opponent for Byron Bitz’ first NHL fight in what was at the time a 2-2 game in Boston. It didn’t seem especially important to the result, as the teams went to an overtime before the Bruins came out on top, 3-2.

Feb. 11 (vs. NYR): 2:43, 1st period. This was one of your odd ones. Brashear had just gone off after a three-second shift in a scoreless game, then came right back on to take on Colton Orr. One could say he squared off on his first shift. Then, Matt Bradley did the same thing three seconds later, taking on Aaron Voros. Neither bout seemed especially influential on the flow of the play, although the Caps did take a 2-1 lead into the locker room after one period. The Rangers won, though, in a Gimmick, 5-4.

Feb. 26 (vs. ATL): 2:52, 2nd period. This was one of those bouts that seems to have had an unintended effect. Coming when it did, with the Caps nursing a 2-1 lead in the second period, it might have given the Atlanta Thrashers some life (or maybe not). The Thrashers scored just over a minute later. But the Caps had the last laugh in a 4-3 win.

Mar. 10 (vs. NAS): 12:27, 1st period. In what would be, by contemporary standards, a fight-marred game (there would be three bouts in this game against Nashville), Brashear got things started against Wade Belak. It would be his last moment on the ice for the regular season, as he sprained a knee in this fight. Matt Bradley would face Jordin Tootoo three seconds after this fight, and John Erskine would give Wade Belak another shot at a Capital 4:18 into the second. None of this seemed to have any influence in the outcome, a 2-1 overtime win for the Caps.

Looking at the fights, they look like a window into the past. No fewer than six of the 11 were against fellow enforcers or guys accustomed to dropping the gloves (Jody Shelley, George Parros, Riley Cote (twice), Colton Orr, Eric Boulton). None appear to have really had an impact on the decision. It calls into question just what Brashear’s role is – or might be – on this team. His hockey skills seemed to have diminished considerably. His enforcement role seems to have little demonstrable effect on outcomes. He was worst on the team (minimum: 60 games) in penalties taken per 60 minutes at 5-on-5. The Caps were not, at least looking at their record, a better team with Brashear on the ice. Even with the six-game suspension in the playoffs, he didn’t appear to have merited a sweater, given that the Caps could have used some more defense and some more offense from the lower half of the forward lines.

The Caps are a club that lacks a measure of grit. But grit should not be confused with inconsequential side shows that too many fights in the NHL have become. Brashear’s trading fists with others of his type just don’t appear to have much influence on the game anymore. That certainly seemed to be the case this year, and while he gives every indication of being a fine teammate, and will hit and forecheck, Brashear’s other skills did not translate into very much production, either in his own statistics or the team’s win-loss record.

Email ThisBlogThis!Share to TwitterShare to FacebookShare to Pinterest
Labels: Brashear, the tens 2008-2009

A brutal assessment of Brash's season. Too bad it's true. If his contributions, such as they were, merited a C-, I'll be interested to see whether anyone gets a D or F.