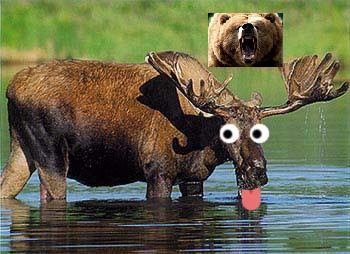 And then there was one to go…

The Hershey Bears inched to within one win of their tenth Calder Cup championship in team history with a 2-1, come-from-behind win over the Manitoba Moose this evening at Giant Center. The score suggests a close game, but in this instance we’re reminded that close on the scoreboard is not necessarily close on the ice.

This was a game for which a Bears loss would have been an injustice perpetrated by fate. Hershey did a fine job for most of the 60 minutes in pinning the Moose in their own end, constantly and consistently sending two forecheckers like cruise missiles to the puck-carrier, causing a bushel of turnovers. The only offense the Moose could muster in the first, oh, 55 minutes (and we’ll get back to that) was a wrister that Ray Sawada snapped over the blocker of Bears goalie Michal Neuvirth off a nice feed from Jason Jaffray at 11:37 of the first period.

Manitoba couldn’t crack the Hershey shell even when the Moose had an abbreviated 25 second 5-on-3 late in the second period. They would fail to convert on all five of their power play opportunities, making them oh-for-ten in Hershey this weekend.

Hershey spent the first 25 minutes looking as if that lone goal for the Moose would hold up and spoil the party at Giant Center. Manitoba goalie Cory Schneider was stopping everything, but the Bears were not making it as difficult as they could have. Too many of their shots were bruising Schneider’s sternum, and there were no rebounds upon which to pounce. But just past the five-minute mark of the second period, Kyle Wilson picked up a loose puck, stepped through two defenders at the top of the left wing circle, and swept the puck past Schneider on the short side to tie the game.

Then, in the third period, it was Hershey’s turn to benefit from a 5-on-3 as former Capital Nolan Baumgartner was sent off for hooking, then Greg Rallo was led to the box 55 seconds later after the Moose were whistled for too many men on the ice. Two seconds before the first minor to Baumgartner expired, Keith Aucoin took the puck on a rebound off the end boards and snapped it behind Schneider on the short side before Schneider could recover to give the Bears the lead and send the Giant Center crowd into a frenzy.

The next six or seven minutes saw the teams going back and forth – Manitoba looking for the equalizer and the Bears trying to earn some insurance. Neither could capitalize, but that merely set the stage for a frantic last five minutes. Manitoba managed to turn the tables on the Bears, force-feeding them some of the forechecking pressure that the Bears were so effective at using over the first two periods. When Michal Neuvirth was not having to make saves from all angles, it was all Hershey could do just to clear the puck to get five fresh pairs of legs on the ice. At the 18-minute mark, referee Francois St. Laurent sent Jason Jaffray and Alexandre Giroux off with coincidental minors, opening up the ice for some 4-on-4. Then, with just under 30 seconds left, St. Laurent sent the smallest player on the ice – Chris Bourque – to the box for cross-checking.

It made for a wild last half-minute. The Moose pulled Schneider to set up a two-man, 5-on-3 advantage, but Bears foiled the last chances the Moose tried to mount against Neuvirth and skated off that last half minute. The Moose outshot Hershey 13-1 those furious last minutes of the third period.

- Much better game for John Carlson tonight. He was hitting, moving the puck smartly, doing a good job keeping the puck in the offensive zone.

- Quintin Laing is probably not going to have a long NHL career. But geez, does this guy pay the price to make a play. By the time this one was over, he had cotton wadded into both nostrils. A broken nose or just your average bloody nose, he was out there breathing through his mouth and doing his best to make plays in his end.

- Hershey’s fourth line of Andrew Joudrey, Steve Pinizzotto, and Oskar Osala was all over the Manitoba end pressuring puck carriers. Pinizzotto was a particular nuisance, finishing checks with gusto and just generally being a pest.

- We could understand the roughing minor Bryan Helmer took in the first period (he took Alexandre Bolduc off with him), but the high-sticking minor at the end of the first? Not good.

- Neuvirth was good – great in fact – when he was tested late, but he spent long stretches of the first two periods getting little work. Hard to keep sharp that way, especially for a young goalie. Credit to Neuvirth for maintaining his edge.

- From the “and a babe shall lead them” file, Hershey has served as an object lesson to the parent club the past couple of nights. You’d be hard-pressed to find a Bear who wasn’t launching his body at a Moose or a puck. Even Mathieu Perreault – all 166 pounds of him (as it says on the web site) – was sticking his nose in there on the forecheck trying to pin Moose defensemen against the walls.

- This might not surprise you, but these teams don’t much like each other. There weren’t many whistles that weren’t following by shoving, yapping, and general exchanges of unpleasantries. It was very entertaining.

- Aucoin played as if he had a dinner of Red Bull casserole. He was all over the ice and had at least a half dozen good scoring opportunities.

- Make no mistake, the Moose were hanging around in this one because of the play of Cory Schneider in goal. For the second straight night, the Moose looked to be badly out of sync at 5-on-5.

The Bears have a chance to do something they haven’t done in 29 years – win the Calder Cup on home ice. To do it, the Bears will have to endure what Coach Bob Woods called in his post-game press conference “the most difficult game of their career.” But with the way Michal Neuvirth is playing (saving 96.1 percent of the shots he’s faced in the playoffs at Giant Center) and the way the Bears are dominating the play at 5-on-5, you have to like their chances.

Tuesday night.
And here are some pictures from the event... 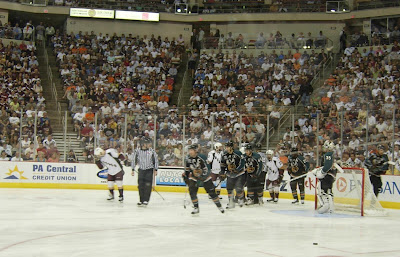 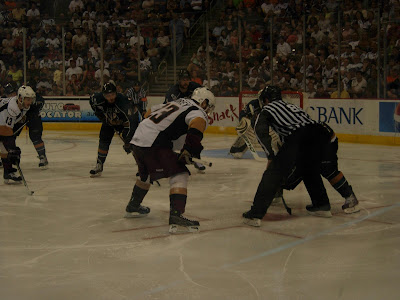 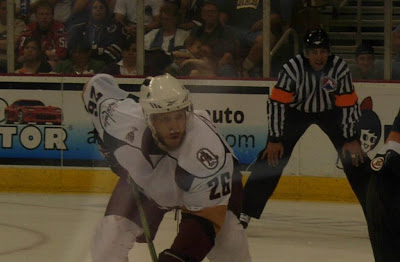 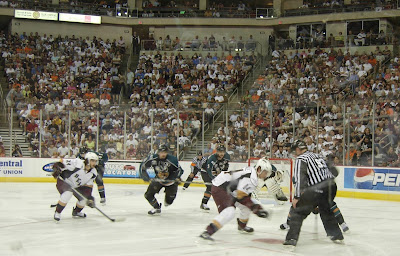 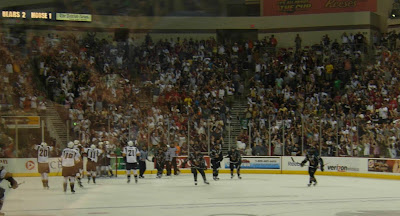