Well, if that’s the last home game for the Caps until March, fans will have a ton of memories to re-live in the meantime.

The Caps spotted the Pittsburgh Penguins a 4-1 lead, then came back like, well, rampaging beasts to claim a 5-4 overtime win and their 14th consecutive win that ties them with the 1929-1930 Boston Bruins for the third longest such streak in NHL history.

But it all came down to an errant stick, that being the one held by Penguin defenseman Brooks Orpik, who used it to pop Alexander Semin in the chops 2:26 into overtime and earn a seat in the penalty box. With the Caps skating on a 4-on-3 advantage, Mike Green slid the puck over to Alex Ovechkin for a one-timer that worked through goalie Marc-Andre Fleury to hit the far post. With Fleury unable to locate and smother the puck, Mike Knuble pounced, backhanding the puck back through Fleury’s legs and into the net for the win that sent the hearty, blizzard-weary crowd into a frenzy.

Before that, though, the matchup between Alex Ovechkin and Sidney Crosby didn’t let the folks at NBC, or in the arena for that matter, down. Crosby scored a pair of goals three minutes apart in the first period to stake the Penguins to a 2-0 lead (the fourth straight game the Caps have allowed the game’s first goal), but then Ovechkin put the Caps on his shoulders and brought them back, halving the lead midway through the second period, then scoring a pair just over four minutes apart in the third to record his – and the Caps’ – first hat trick of the season.

But those two weren’t the whole story, wither. Jordan Staal netted a pair of goals 1:24 apart in the second period that seemed to put the game out of reach of the Caps at 4-1. Eric Fehr bull-rushed his way to a goal, flipping a backhand shot at Fleury, then following his own shot to pot the rebound that Fleury allowed.

And despite the snow that blanketed the region (we didn’t make it to this game, barely getting our driveway cleared in time for the noon faceoff), it seemed like a playoff-volume crowd at Verizon Center. You really couldn’t have asked for a more entertaining game (well, maybe you could if you were a Penguin fan). 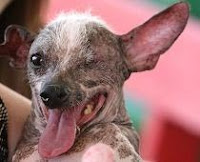 -- Mike Knuble didn’t get a star, but he should have gotten something (if only a lick of the face from Kanoobie). In addition to the game-winning goal, itself a product of sticking with the play, it was his following up in the faceoff circle on a faceoff between Nicklas Backstrom and Sidney Crosby, getting to the puck and moving it to Ovechkin for the game-tying hat trick goal.

-- The Caps once more displayed a finishing kick, outscoring the Penguins 2-0 in the third and 1-0 in overtime. In the streak the Caps have outscored the opposition 30-6 in the third period, 23-14 in the second. They have scored in each and every one of the 14 second and third periods.

-- The Caps have outscored the Penguins 5-0 in the third period in two games this season, not including the overtime winner today.

-- Think this was a game that players took seriously? Mike Knuble had his first fight since squaring off with Mike Fisher in November 2002. Kanoobie was really howling over Knuble getting the GHHT (Gordie Howe hat Trick)..

-- Think this was a game that players took seriously, II? 15 skaters for the Caps were credited with hits. Brian Pothier had four (including one particularly picturesque one on Brooks Orpik in the second period), Jeff Schultz had three.

-- It was an amazingly clean game from a turnover standpoint. Combined the teams had only a total of 21 turnovers while registering 152 combined shot attempts. Neither Crosby nor Ovechkin had a giveaway.

-- OK, I realize that this being an NBC national game, Crosby had to get the second star, but on my scoresheet it was Jordan Staal. Despite being the sort of player who draws a considerable amount of defensive responsibility, he was on the ice for only one Caps goal (while getting two of his own). His misfortune was that the goal he was on the ice for happened to be the last one.

-- Lost in all this is a “game within a game” item. One of the reasons the Penguins were able to pound shots at the Caps so effectively in last spring’s playoff was that they abused Mike Green mercilessly in the Caps end. Green had no giveaways in more than 27 minutes of ice time.

-- Five Caps defensemen had 16 of the total of 22 blocked shots (Shaone Morrisonn was the only defenseman not to have one).

-- I’m guessing Bill Guerin was complimenting Alexander Semin for having mastered the “Crosby head snap” for which he drew the high-sticking call from Orpik in the overtime. That a Penguin – any Penguin – could complain about that, having spent several years watching the master of the “head snapping back” move, is rather bizarre. They should recognize art when they see it, and besides, imitation is the most sincere form of flattery.

-- “Tyler Kennedy would obliterate Nicklas Backstrom.” He’s “a little ball of hate.” Maybe, Pierre, but it seemed Backstrom acquitted himself pretty well. Yes, by holding on for dear life. But truth be told, Backstrom has a little bit of the Forsberg in him, too, when it comes to nastiness.

-- Here is an indicator of the kind of pressure that the Caps’ skill at forward provides for an opponent – of the five minors taken by the Penguins, four were taken by defensemen.

-- Alex Ovechkin had six shots on goal in 25:36. Ok, he does that. Mike Green had five shots in 27 minutes and change. OK, that’s not unheard of. Alexander Semin, five shots in 19 minutes. He’s had games like that. But Eric Fehr, five shots in 11:59? He must have been channeling the days when he was at Hershey playing the Baby Pens.

-- Speaking of which, Hershey also came back from a three-goal deficit, also against the Penguins (The Wilkes-Barre/Scranton version), and also had a hat trick (Mathieu Perreault). Hershey is 39-9-2 for the season. Caps are 41-12-6. 80 wins combined for the teams and it’s barely February?

-- Did Jose Theodore have his best game? No. But he did stop the last 17 shots he saw to give the Caps a chance to claw back into it.

-- At the other end, Marc-Andre Fleury started well – he stopped the first 16 shots he saw. But he wilted rather badly in the second half of the game, allowing five goals on the last 18 shots he faced.

-- One thing that has characterized the streak so far is the balance the Caps have enjoyed from the top three forward lines. Not today. This was a day for the top line. Alex Ovechkin, Nicklas Backstrom, and Mike Knuble went a combined 4-4-8, including the game-tying and game-winning goals.

-- (edit: we thought we'd better delete the link in this item in that many are reporting being infected with viruses as a result of accessing it). Apparently, one of the NBC telent wasn't in a happy mood after the game, either.

-- Oh, Doc Emrick... if you're going to plug the restaurant a team stops at in the middle of a snowy night for some food, it's probably better for marketing if the team actually wins the game.

OK, be honest. When it was 4-1, you were thinking, “maybe that ESPN Super Bowl pregame show won’t be too bad after all.” But the Caps have owned third periods in this streak – they’ve been outscored in a third period only once in the previous 13 games. And today, they did it again. And it couldn’t be a better way to end the home portion of the pre-Olympic part of the season. The Caps take to the road now with games in Montreal, Ottawa, and St. Louis before splitting up to join their respective national teams or getting a well-earned break. For Caps fans it was a welcome respite from a hard weekend of work dealing with Mother Nature’s haymaker of a punch. And for that, boys, thanks.
Posted by The Peerless at 5:00 PM

IMHO, Ovi should get a GHHT as well - he got two for roughing for throwing a great left cross just after Jordan Staal scored his first goal.

A GHHT and a regular HT in the same game... Not too bad - Oh Captain, My Captain, indeed!

Don't you need a fourth goal to have a HT and GHHT in the same game?

I wish my mailbox looked like that right now... then I wouldn't be worrying about how sore my back will be when I finish digging it out of the snow...winter wonderland my butt....