Race for the Hardware -- Ross and Richard

It’s about the Cup, not about individual achievements. Yes, we get it. But we’re fans, and that makes us greedy. Greedy enough as Caps fans to want to see Alex Ovechkin win the Ross (top scorer), Richard (top-goal scorer), Hart (MVP), Pearson (outstanding player), and Conn Smythe (playoff MVP) to pull off the quinella, or whatever you call winning the five big individual trophies.  Throw in the Presidential Medal of Freedom*, too.  Like we said, we're greedy.

The Ross and the Richard are easy – the one with the most (points, goals) wins. And at the moment, Alex Ovechkin is in a dogfight with Vancouver’s Henrik Sedin for the Ross and with Sidney Crosby for the Richard. What are Ovechkin’s chances? Well, a lot of what goes into this is what goes into this, that being the level of commitment he and the Caps will be exhibiting over their last seven games with the Southeast Division and Eastern Conference titles clinched, and the President’s Trophy in reach.

But schedules play a part in this, too. How the players performed against the teams left on their respective schedules might provide a hint at how the races for the hardware will finish. First, the Richard race… 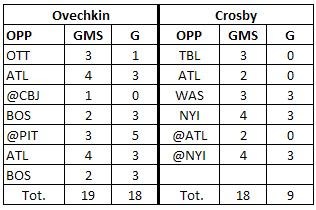 Alex Ovechkin has the benefit of an extra game remaining on his schedule in his race with Sidney Crosby for the goal-scoring title. Ovechkin has seven games left, Crosby six. Both have only two away games in their mix. This is especially important to Crosby, since 32 of his 47 goals have been scored at home in Mellon Arena this season. Ovechkin’s are almost evenly split between Verizon Center (24) and the road (22).

Where Ovechkin holds an edge is in his opposition. As indicated in the table above, he has 12 of his 46 goals against the five teams left on his schedule. But since he gets two bites at the apple in playing Atlanta and Boston, that works out to 18 goals in 19 man-games worth of performance, adjusted for the schedule. Crosby gets a similar double-look at the Thrashers and at the Islanders, but where Ovechkin has six goals in six games this year against his double-dip opponents, Crosby has three in six games (all scored against the Islanders).

Looking at where they scored the goals, though, might provide a clue as to an outcome. Looking at the opponents Ovechkin has remaining, he has a total of five goals scored at home, seven on the road. Complicating this is the fact that Ovechkin has not yet faced Boston at home, but will (twice) in these last seven games. Crosby has split his six goals scored – three at home, three on the road. But he gets to face the team he scored two home goals against (the Islanders) twice, once at home, once on the road.

The schedule would appear to give the slightest of edges to Crosby to keep his slim lead, if only because he gets to do most of his work in the friendly confines of Mellon Arena, where he has done the most damage this year. The most interesting aspect of this race is that it could come down to the last meeting of the season between the Penguins and Capitals, in Pittsburgh. In their only meeting in Pittsburgh so far this year, Ovechkin out-goaled Crosby, 2-1.

In the end, the schedule favors Crosby ever so slightly, but there is the game in hand that Ovechkin holds. We see this as going down to the wire…

For the Ross, Alex Ovechkin and Henrik Sedin appear to be the final contestants (although the nature of the award allows for the possibility of Crosby getting into this mix). Both players have seven games left, and both have been very productive against the teams they will face down the stretch. Ovechkin has averaged more than a point a game against each of the five teams he will face in the final seven games, with the exception of Columbus, against which he was injured in his only game. Sedin has been at least a point a game against six of the seven teams he will face in the next two weeks (only against San Jose does he not measure up). 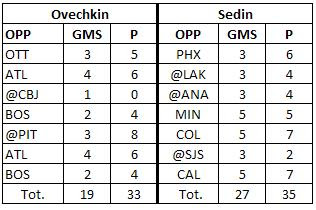 Adjusted for schedule, Ovechkin appears to have a bit of an advantage, because against the two teams he will face twice – Atlanta and Boston – he has 10 points in six games. However, Sedin is remarkably consistent against his group (none of which he will face twice). And he has an even split between home and away games (18 home points, 17 away points).

Sedin has been, overall, a conventional scorer when it comes to the influence of schedule – he has 57 points in 37 home games, 44 in 38 away games. Ovechkin is much the same, despite his almost identical home/road goal scoring totals. He has 58 points in 32 home games and 42 points in 33 away games.

The difference here that favors Sedin, though, might come down to a different player. When Daniel Sedin missed 18 games last fall, brother Henrik was 10-8-18 in those 18 games. A point a game pace is not bad, but compare that to his production with his brother in the lineup – 18-65-83 in 57 games, a 1.45 point-per-game pace. He is also closing with a rush, putting up 21 points in his last 13 games (including seven multi-point games).

For Ovechkin, he has a wild card in the team he hasn’t yet really faced – Columbus. He has faced the Blue Jackets in Columbus twice in his career, a two-goal night the first time and a pointless night the second time (part of the two-shutout treatment the Jackets gave the Caps last year). Which one he pulls out of his hat this time around could spell the difference.

In the end, this is going to come down to Sedin’s consistency and the comfort zone he is in these days against the contest of Ovechkin’s history of abusing some of the teams he will face (Atlanta, 59 points in 39 career games; Pittsburgh, 29 points in 19 games; ditto against Ottawa) versus whatever motivation he and the Caps have over these last seven games. Hard call, but we being Capital red…


*  Awarded to a civilian who makes "an especially meritorious contribution to the security or national interests of the United States, world peace, cultural or other significant public or private endeavors."
Posted by The Peerless at 5:35 PM