The Peerless Prognosticator is ON THE AIR!!! -- Caps vs. Thrashers, April 1

The Caps get back at it tonight in an effort to stem their 0-1-2 slide, the last two losses of which were at Verizon Center. And the Caps get to do it against a familiar foe, the Atlanta Thrashers, who are yet another in a series of teams struggling to make the top eight of their conference (the last two weeks might be a reality series called “Desperate Hockey Players”). The Thrashers, as you are no doubt aware, are named for a bird indigenous to the southeastern United States. But what you probably don’t know is that the thrasher almost became an entertainment icon in this country. Back in, well we’ll just let the expert fill us in on the story. Meet Thaddeus Thrasher…

You don’t seem to be very happy.

“Would you be if you were described as ‘a large, skulking bird of thickets?’”

It isn’t the most flattering thing one could say. But I understand you were almost a big deal in the entertainment industry.

“Yeah, yeah… had it all in my grasp. The fame, the fortune, all the bird seed anyone could want. Then that pecker head came along.”

“I was all set to be the next big star in cartoons. Even had my own signature laugh… ‘yuk y’all… yuk y’all.’”

“What sort of person would want to go for a bird that didn’t even have wings?!... and he wears freakin’ gloves fer cryin’ out loud!”

It is a puzzlement.

“And what’s with the freakin’ hair?”

Well, we’re almost to “Mohawk” time – the Stanley Cup playoffs – but there is still the matter of the last six games of the season. And tonight the Caps play Game 77 on their schedule, hosting the Atlanta Thrashers. These teams will meet twice more before the end of the season, including tonight’s game. So far, the Caps have an unblemished 4-0-0 record against the Thrashers, outscoring Atlanta 22-10 in the four games played so far.

The Thrashers had a very uneven month of March, going 8-7-2 and failing to capitalize on opportunities to jump into the top eight in the Eastern Conference. They were quite streaky for the month, winning their first two games, losing their next six (on in a Gimmick), winning four in a row, then stumbling to a 2-2-1 record over their last five games for the month. The overall numbers look like this… 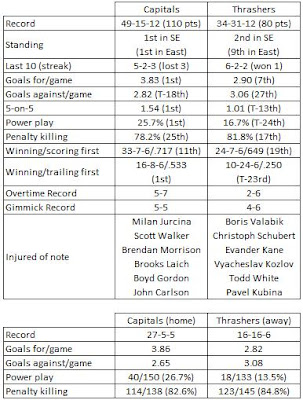 The Thrashers played opponents more or less even for the month, outscored by a narrow 47-45 margin in the 17 games played. Where they were uneven was in special team play. Penalty killers had a fairly good month for Atlanta, killing off 56 of 68 shorthanded situations (82.4 percent). The power play struggled, though, connecting only 10 times in 64 chances (15.6 percent).

What the Thrashers have had, though, is production from Nik Antropov. Playing in all 17 games in March, Antropov was 9-7-16, including three game-winning goals and goals in each of his last two games. What he does not have is a goal against the Caps this season, although he does have three assists in three games played. Career-wise, he is 7-13-20 in 28 games against Washington.

Now that we are almost two months past the blockbuster trade that sent Ilya Kovalchuk to the Devils, what about the return that the Thrashers realized from the trade? Defenseman Johnny Oduya and forward Niclas Bergfors each have played in 22 games since the deal was made, and both have made important contributions to the Thrashers push toward a playoff spot. Oduya has a goal and six assists from the blue line, but offense is not where his contributions are expected. He is a plus-9 in those 22 games, though, and is logging a respectable 20:49 a game. He leads the club in penalty killing ice time at 4:00 a game. The downside is that he has played against the Caps three times this year (twice with the Devils) and is a minus-5 in those games.

Bergfors has eight goals and eight assists in his 22 games with the Thrashers so far and is in the midst of a modest three-game points streak. His goal scoring pace has slowed, however – two in his last 14 contests. His ice time is starting to drop as well. Over a ten-game stretch from March 9th through March 25th, he had been getting ice time in the 17-19 minute range. But in his last three games he averaged less than 16 minutes a game. The rookie has feasted on the Caps this year, though. In four games against Washington he is 2-3-5 (all points scored with the Devils).

No, we are not going with Eric Boulton. Afinogenov remains one of the surprises of the league this season and occupies the second spot among Thrasher scorers. He had a decent March (4-10-14 in 17 games), but what he didn’t provide was much in the way of power play scoring (one goal). The Thrashers are struggling on the power play, and Afinogenov averages more than three minutes of power play time a game. If the Thrashers are to take that next leap in the standings, getting some extra-man punch from Afinogenov could be key, starting tonight against a weak penalty killing team.

Ovechkin had, for him, a rather uninspiring month of March (4-8-12, even). The four goals on 60 shots was surprising. It was by far his lowest shooting percentage month of the season (6.7 percent). The four goals was his lowest total for a full month of games since October 2008, when he played in only eight games (missing others for personal reasons), scoring two goals. Atlanta has been a favorite chew toy for the captain. He is 3-3-6 in four games this year and is 26-29-55 in 33 career games against the Thrashers.

1. Get off fast. Nothing breeds success like success, and given the Caps somnambulistic play lately, a good start is important to breeding that success. It doesn’t hurt that no team in the league has surrendered more first period goals than Atlanta (82).

2. Kill, kill, kill. The Caps are 10 for 16 in killing penalties over their last four games (62.5 percent). A weak penalty killing team has gone putrid. It is not like they had a good month, either – 36 for 49 (73.5 percent). Rip a page off the calendar and start anew. New month, new attitude. Kill penalties!

3. Leave the Fluff on the shelf. Creeping into the Caps’ game lately has been the marshmallow soft goal. Both Jose Theodore and Semyon Varlamov have been guilty of it. Tonight, Varlamov gets the chance to firm up his game and substitute the solid as rock candy sweet save for the spoonful of marshmallow Fluff.

In the end, it all comes down to focus. If the Caps have it, Atlanta does not have the defense to hold them off. If they don’t, well, Atlanta is version 9.0 of “Desperate Team.” After three games’ worth of lackluster effort, we have to think the boys have had enough. But we have an inkling they’ll still manage to make things interesting.