Today was Day 2 of Capitals Development Camp, which is actually Day 1 for The Peerless, which is Day 4 of our summer vacation. All that said, today was a day to find refuge from the Khao Yai National Park in summer… oh, wait, it’s Washington. It’s a humidity thing.

Anyway, refuge being welcome from the rather humid outdoors, so too was hockey. Welcome, that is. And today was the second day of Camp Hockeywanda at Kettler Capitals Iceplex -- summer camp for hockey prospects -- where 18, 19, and 20 year olds (give or take) gather to participate in such summer staples as two-on-none drills, five-on-five scrimmages, and of course, the dreaded “herbies.” But we’ll get to that…

There are really three broad categories of player at such events. There are those whose skill level is just so clearly evident that you know at some point, absent the sun stopping in the sky and sucking the earth into its fiery embrace, they will find their way to the NHL. Not this year, certainly, and perhaps not next year. But they have the skills and the presence that says, “NHLer.”

Then there are those guys who have been here before. These young men have gone through the drills, have some knowledge of the system the Caps use, know what’s coming (those herbies), and exude the sort of confidence borne of knowledge and experience.

In the first group you would be inclined to think Marcus Johansson and Evgeni Kuznetsov would be included. You would be right, but for entirely different reasons. Johansson was in the morning group (the one with arguably lesser known names among them) and carried himself with the sort of confidence-bordering-on-arrogance that players who have big things ahead of them seem to universally have. Oh, and yes, he is skilled. But what impressed us as much as anything was that he delivered the only bona fide hit of the morning session.

The obvious comparison to make with Johansson is with his countryman, Nicklas Backstrom, who went through one of these a few years ago (has it been that long?). At this point, we would have to say that Backstrom’s talent was clearer to see, but Johansson looks a lot more confident and comfortable than we remember Backstrom being in his first year going through this. He has to demonstrate an ability to compete against better talent down the road, but we can’t discount the possibility that he will be on the roster on opening night.

On the other hand, Kuznetsov has a very obvious skill set. He skates rather effortlessly, and he is very smooth as a stickhandler. He also seems rather comfortable in his own skin, looking as if he was cracking wise at every opportunity (not inappropriately). But what we noticed was that he is a perpetual motion machine. We recall one drill, one in which the sides alternated ends of the ice, one group at one end going through it while the next group was poised to take to the other end at the whistle. Kuznetsov reminded us of the dragster at the line, revving its engines in anticipation of the green light.

The third player in the mix might be Stanislav Galiev who might take a bit longer than the other two to crack an NHL lineup, but he skated with the sort of confidence that comes from being a step ahead of and above much of the competition.

In the second group are names that followers of the Caps would certainly recognize as players making progress (in some cases haltingly) through the system. Perhaps the most interesting of this group is 2008 draftee Anton Gustafsson. He is reported to be healthy for this camp, a welcome change from the past. But whether it is a product of his being healthy or having been through these camps before, he looked quicker and smoother than we remember seeing him. One play stood out. In one of the drills, Kuznetsov skated in on the goaltender and very adeptly pulled that puck back and wrapped it around the goalie. Gustafsson was the next skater in, and he used almost exactly the same move with the same successful result. We doubt he would have tried that, let alone succeeded, in the past.

Cody Eakin also looked better for having had the experience of this camp (not to mention the confidence-building experience with the Hershey Bears in this year’s Calder Cup run). Watching him matching up against Kuznetsov in the scrimmage drills was an interesting game-within-a-game treat one gets at these events.

Stefan Della Rovere looked a bit subdued in today’s session, but he looks as if he’s been here before. And the experiment to make a winger out of Joe Finley appears to be over. Finley looks to be a more polished skater, and we took note that even when he hits a guy at half-speed, it is like getting hit by a Kenworth.

The third group of players is largely a group of free agent invitees, players who have something of a long shot to find a place in this organization on a long-term basis. But that doesn’t keep some from having their moments. One in each session caught out eye. Cameron Burt skated with Johansson and Galiev in the morning session and held his own in terms of keeping up with the pace. It is hard to develop a chemistry with linemates on such short notice, but he seemed to be in position often enough in the scrimmage portions of the session that with time he might be click with Johansson and Galiev. Not to say that it would ever happen, but it suggests that he has the skill to get a longer look, either here or with another club.

Chris Forfar got our attention in the afternoon session for standing up to Joe Finley, who on a couple of occasions smeared the young forward along the wall. To his credit he tried to return the favor when play headed the other way, but giving away eight inches and 60 pounds meant that effort was in greater supply than success.

No Caps Development Camp session is complete, though, without the “herbies” – the 60-seconds or so of hell in which players skate to each of the lines and back in a series of sprints. Well, to today’s was added a twist… changes of direction. Not only did the players have to blue line and back, red line and back, but when they got to the far blue line, coaches were perched in four corners of a box in the far end. Exhausted from the drills and the first part of the herbies, players had to go from coach to coach and back, which probably tested their ability to concentrate (uh, Woods, right?... “No, French!”) as much as it did their endurance.  The coaches were having to play traffic cop, pointing out which coach to skate to, to prevent players from skating into one another.  Ahh... summer camp.  The stuff of memories.

It was a great way to break up a soggy summer, and with four days left it should make for a fun week. Here are some pictures from today’s activity (click on the image for a larger view)… 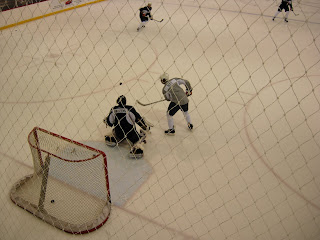 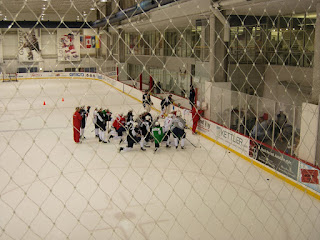 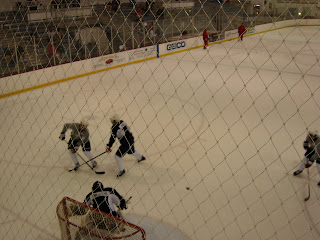 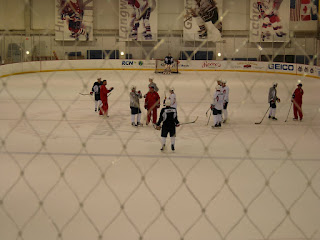 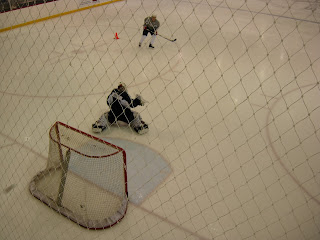 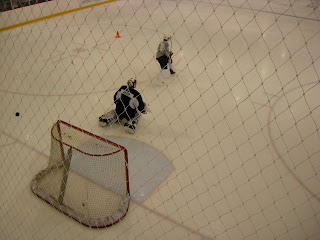 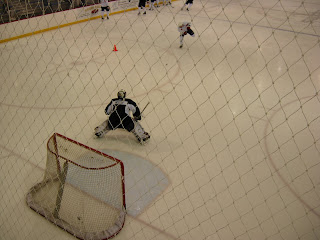 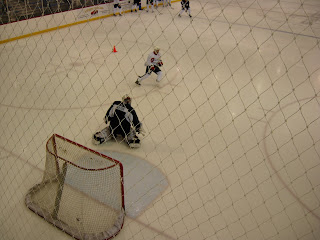 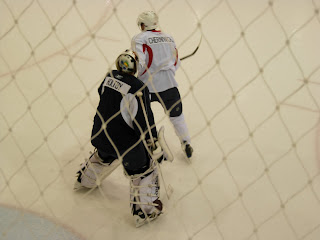 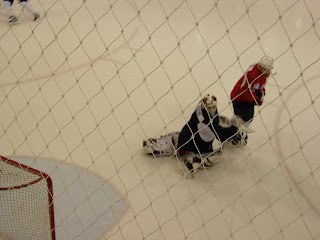 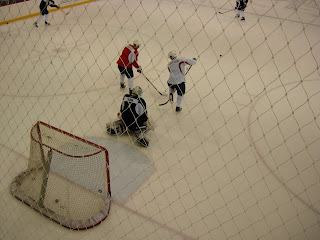 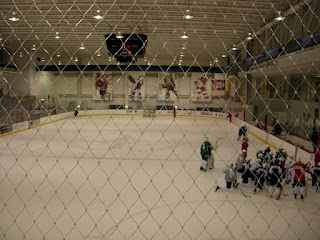 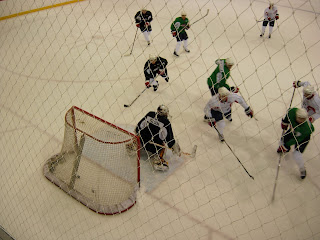 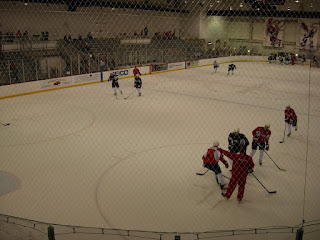 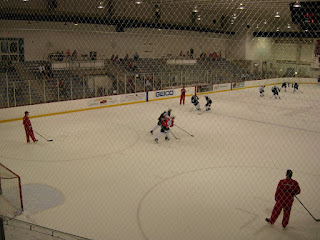 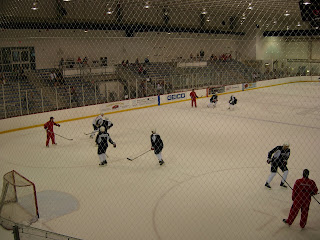 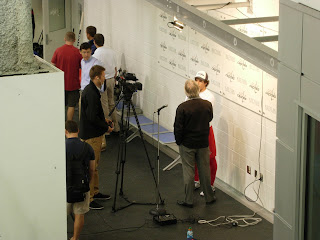 thanks
keep up the good work!
ray

Close is a relative thing. I live near Dulles Airport, which is close in a manner of speaking.

Well Peerless, you probably don't live too far from me. I live a stone's throw from the Toll Road less than 15 minutes from the airport myself