We’re going to go out on a limb here and guess that Braden Holtby is not much of a morning person. Or Trevor Bruess, for that matter.

The boys went at it again, a scant 18 hours after the start of Scrimmage 1, held yesterday afternoon. And in the tried and true tradition of hockey played everywhere, familiarity with an opponent – even if they share the same employer for the week – breeds contempt.

Team White defeated Team Red, 6-5 in a shootout, to take a win and a tie into the final scrimmage of the week, to be played on Saturday at 10 am. What did we notice?

-- First, it was a nice crowd for a 9:00 am start and it being a workday.  The rink looked to be about three-fourths full from our spot.

-- Braden Holtby might need his vision checked. That guy whose legs he took a one-handed slash at (and connected) happened to be the Caps first round draft pick this past June. Kuznetsov is his name. Seems the young forward got a bit too close to Holtby as the goalie was trying to play a puck (well outside the crease, it should be noted), got tangled up with him (leading to a goal when Holtby could not retreat to his crease in time), and as he was starting to head back up ice after the score took the business end of Holtby’s stick in the back of the legs, causing him to turn in wonder before limping to the bench. This prompted a few comments from the upstairs crowd directed at Holtby, although those folks might not to have the term “heat of the moment” in their lexicon. Was it the smartest thing Holtby’s done this week? We’re going to bet on “no,” but it’s hardly an unprecedented reaction from a goalie, even on one of his clubmates.

-- Holtby was not the same after that incident. He got caught wandering a bit too far from his crease on one other occasion -- also resulting in a goal -- and all told allowed four goals in two periods after his teammates staked him to a 3-0 lead in the first period.

-- Trevor Bruess, on the other hand, packed a whole game’s worth of aggravating behavior into one period – the third. With Team Red already starting the period on the penalty kill, Bruess – representing Team White – egged Joe Finley into taking a slashing penalty right off the opening draw to give his team a 5-on-3 advantage. Bruess also mixed it up with Cody Eakin as the two were headed to their respective benches, and there might have been a kerfuffle had Stefan Della Rovere of Team Red not stepped between the two (no doubt to deprive Bruess of having all the fun). Frankly, we smile at the thought of a Della Rovere and a Bruess playing on the same team. They sure would be a pain in the ass to play against.

-- Eakin had the goal of the morning, though. Working to get position in front of Holtby’s crease, he was knocked to the ice. But lying on his side just outside the paint, he still managed to deflect an incoming puck around Holtby for a goal. Some goals are wristers, others are slappers. This was more a “Tempur-Pedic.”

-- But while Eakin had the goal of the day, Della Rovere was potting a pair of his own. So did Jake Hauswirth for Team Red, but the curious thing about his goals was that neither involved a goaltender actually defending his net. His first was on the Holtby-Kuznetsov scramble, and the second was when Holtby was just too far east of his crease when Hauswirth got the puck.

-- Team Red (Group A on your scorecards) has the talent, Team White (Group B) has the grit. For the first period, Team Grit didn’t let Team Talent get a sniff of the offensive zone. Team Red just couldn’t find a clean way to get out of its own end. But as the game wore on, the superior firepower that Team Red possessed more than nullified the territorial advantage Team White enjoyed.

-- Wade McLeod just completed his third year at Northeastern University and is a free agent invitee to this camp. He’s not a big fellow, but he does go in among the trees, and he was rewarded for his effort with a couple of goals. That is the kind of thing that might get a player noticed.

-- Camp Gimmick followed the 5-5 regulation tie, and while the fancy stuff missed (Evgeny Kuznetsov taking the great polar route – almost behind the players’ benches – before trying to pull Dan Dunn out of position, Phil DeSimone’s trying to deke Dunn to the ice, Johansson trying to show the puck to Phillip Grubauer before pulling it back to slip between his legs) it was Stanislav Galiev using just the ol’ meat and potatoes skate in, cut across, and slip the puck five-hole that sealed the win for Team White.

Today, score one for grit. 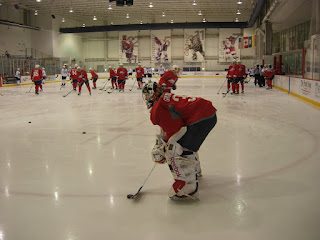 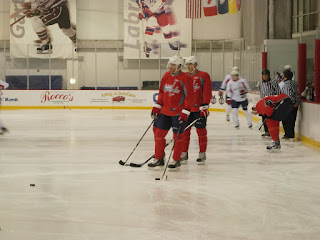 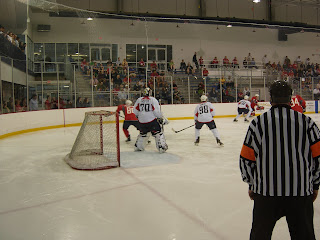 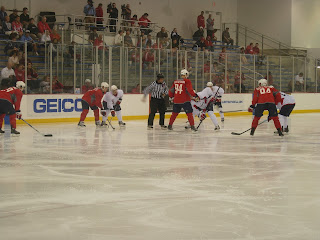 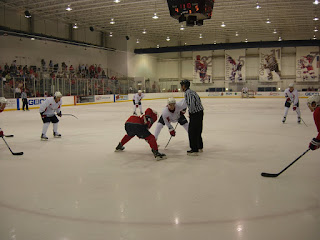 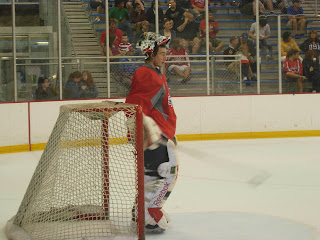 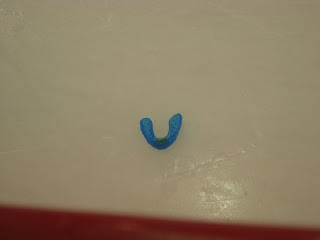 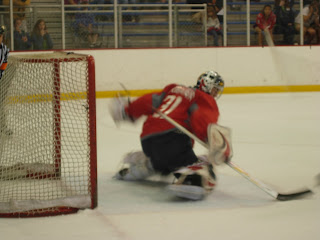