The Peerless Prognosticator is ON THE AIR!!! -- Caps vs. Predators, October 16th


“You want to be QUIET?!...ugh…quiet?"
C’mon, cousins, it’s time for prognosticating.


"Go away…"
Party too much last night?


"GO AWAY!!!"
Well, we’ll have to do this ourselves this morning. Seems the cousins got started on the weekend a little too early for Saturday morning prognosticating. They’ll have their International Brotherhood of Bloggers cards suspended for a while, I’m sure. As for the game, tonight the Capitals take their three-game winning streak to Music City to visit the Nashville Predators. This is a series that is rarely renewed, it seems. The teams have met only 14 times in their respective histories, the Caps having an 8-5-1 record against the Predators (3-3-1 in Nashville). Perhaps that is a good thing among those of you who have gotten used to a certain style in watching the Caps. In those 14 games the Predators hold a 37-34 edge in goals, not including Gimmicks, an average of five total goals per game. Nashville, you see, has had a reputation for playing games close to the vest. You can see that in last year’s numbers… 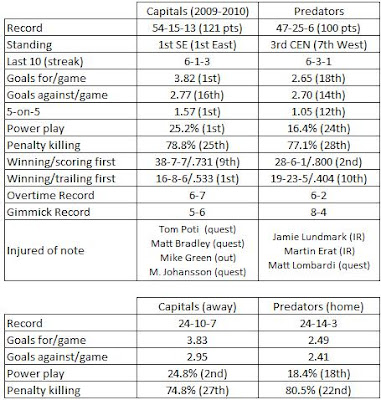 At first glance what is surprising about Nashville is how poorly they performed on the penalty kill last year (77.1 percent). And, the PK has been worse in the early going so far this season (66.7 percent, tied for 28th). Its saving grace is that it has not been called upon to kill off many man shortages (nine in three games). On the other side of the ledger, the Predators’ power play has been lethal – 30.8 percent (sixth overall). But here, too, they have not had much occasion to unleash it, only having 13 man advantages in three games. Overall, with four power play goals scored and three allowed (no shorties either way), they are a plus-1 on special teams. At even strength, though, Nashville has been effective, outscoring opponents 7-3 in the three games.

Nashville could not claim a high end scorer last season (only Patric Hornqvist and Steve Sullivan cleared 50 points – barely). But they were balanced. Six players topped 40 points; 19 were in double digits. That balance is evident once more with 13 Predators having registered at least one point and six players sharing in the 11 goals they have scored so far.

Steve Sullivan leads the Predators in both goals and points in the early going. Sullivan continues to amaze after missing almost 150 games over the 2006-2007 through 2008-2009 seasons. Since missing those games to back surgery and rehabilitation, he is 32-56-88 in his last 125 games (including 4-1-5 in three games so far this season). Sullivan’s hot start is a continuation of how he finished up the 2009-2010 season, in which he did not have consecutive games without a point over his last 16 contests. Including those games he is 9-8-17 in his last 19 games. He faced Washington only once last season, not recording a point in a 3-2 shootout loss to the Caps on October 17th. Over his career he is 6-5-11 in 15 games against Washington.

Patric Hornqvist is picking up where he left off last season, too. Last year – his first full season in the NHL – the Sollentuna, Sweden, native potted 30 goals on his way to a 51-point season. He has faced the Caps twice in his career, recording an assist in each game. If the Predators are to be watched on the power play, Hornqvist is the player to bear watching. He led the team in power play goals last year (10). Hornqvist is coming off a 1-1-2 effort against the St. Louis Blues, his goal being the game-winner in a 4-3 win (a power play goal).

The new element added to the Predator mix is Cal O’Reilly. After coming into this season with 42 games played over two seasons (5-11-16 in those games), he has four assists already in the Preds’ three games played this far. Two of those assists have come on power plays, giving the Caps something else to think about when on the penalty kill. He has faced the Caps only once so far in his career (0-0-0).

The Predators have quite a 1-2 punch from the blue line in Shea Weber and Ryan Suter. In three games thus far both have three points, both have three assists, both are averaging more than 25 minutes in the three games. Weber is the bigger hitter (13) than Suter (1) and the more adept so far in blocking shots (eight to one). Both have a history of being quite adept offensively – Weber has three 40-point seasons in the last four, Suter recording three consecutive 30-plus point seasons. Neither has an extensive resume against the Caps, Suter dressing for five games against Washington (1-1-2) and Weber for four (1-2-3).

In goal, Pekka Rinne would appear likely to get the call, if healthy. Rinne started in the season opener for the Preds, but had to come out of the game against Anaheim in the third period with a “lower body” injury. In his 43 minutes of ice time to date he has allowed but a single goal on 30 shots. Rinne is the franchise goalie for the club. Over the last two seasons he is 61-31-9, 2.46, .914, and 14 shutouts. Tonight will be Rinne’s first career appearance against the Caps.

Lombardi signed a three-year, $10.5 million deal with Nashville last summer, the idea being that his speed and offensive jump (19 goals and 53 points last season with Phoenix) would provide some punch for a club that at times has been offensively challenged. It’s early, but Lombardi is off to a slow start. In two games he has yet to record a point, and he comes into this game nursing an upper body injury that is described as “day-to-day” (what, you were expecting an actual description of the injury?). Having him in the lineup would help the Predators offset somewhat the Caps’ offensive power, and his speed would give a depleted Caps blue line a problem to deal with.

The Caps are going to go into this game with a thin defensive lineup. Tom Poti and Mike Green are out for this one, meaning that the Caps are going into this game with second and third pairs that are likely to include Karl Alzner, Tyler Sloan, John Erskine, and Brian Fahey. And, this being a road game, it will be tough to hide anyone from the matchups Nashville coach Barry Trotz wants on the ice. Boudreau will have to be on his toes as much as the guys on the ice to figure out on the fly how best to pair up his mix-matched defense for this one.

1. Play your game. With the defense in the state it is in, the guys who do take the ice have to guard against playing outside their comfort zones. John Carlson is going to get more minutes, but he isn’t Mike Green. Jeff Schultz needs to keep doing what he is doing. Fahey, who will be playing in his first NHL game, can’t get caught up in the novelty of the situation.


2. Helping hands. The forwards have done a better job so far this year of being defensively responsible. That is going to be very important in this one, to help out a thin defense and whoever it is in goal for the Caps (Semyon Varlamov now being cleared to play, it is uncertain whether he or Michal Neuvirth will get the call).

3. Tootoo, too. Jordin Tootoo is that little ball of hate that every team has to look out for. In 358 career games he has 576 minutes in penalties. He has faced the Caps only twice since the lockout – no points in either game, but a fight against Matt Bradley. A disruptive force, the Caps can’t afford to have to deal with much in the way of disruption, especially on their blue line. He’ll be trying to get the Caps off their game.

In the end, this game might be somewhat different than what we are used to in Caps-Predators games. In 14 games between the clubs, the norm is a 3-2 decision (the teams have averaged five total goals a game). With the Caps’ defense depleted and Rinne coming off an injury, there is at least the potential for the over on this one, if the line is five goals.