Michal Neuvirth
Theme: “To win a race, the swiftness of a dart availeth not without a timely start.”
-- Jean de La Fontaine

Michal Neuvirth came into the 2010-2011 season in a battle with Semyon Varlamov to see which of the two graduates of the draft class of 2006 would emerge as the Caps’ number one goaltender (that is, when they weren’t wondering if the Caps would get a veteran that would bump one of them off the roster).

Fortunately for Neuvirth, Varlamov began the season on the injured reserve list. It was an opening that Neuvirth skated through, appearing in the Caps’ first 13 games. You could not call his numbers spectacular – a 2.41 GAA and a .914 save percentage – but he had an 8-3-0 record (two no decisions) with one shutout.

In a way, that start might have been his high point of the season. At the time, he was arguably the Caps most valuable player, backstopping the club effectively while the Caps had to contend with a lack of depth stemming from Varlamov’s injured status. But after that, his season had a peculiarly odd feel to it. A combination of the occasional absence to injury or illness (a four game absence to a lower body injury sandwiched between single game absences to illness), Varlamov’s return, and the emergence of Braden Holtby when both were out resulted in Neuvirth playing more than four consecutive games only once over the last 69 games of the season. His ten-game splits looked like this:

What Neuvirth did do, however, was finish strong overall. He appeared in 19 of the last 29 games, went 12-6-0, 2.31, .919, with three shutouts. But there was an ominous aspect in his finish that would end up biting him later. Consistency, or more precisely, perhaps not enough of it. In the 18 decisions he had, he allowed one or no goals six times, but he also allowed more than three goals three times, two of them coming in the last five games of the regular season.

What he did not do in the regular season is play well against playoff-caliber teams. Neuvirth appeared in 21 games against the 15 other teams making the post-season, posting a 9-6-2 record. That is respectable enough, but his GAA of 2.89 and save percentage of .901 were average at best. And those numbers include a record against the Pittsburgh Penguins of 2-0-1, 0.65, .977. Take away those results, and his record slips to 7-6-1, 3.36, .885.

But let’s not forget where Neuvirth was starting from, either. He was an injury fill-in in 2009-2010 who appeared in only 17 games, essentially a cup o’ coffee in the NHL. And although he experienced considerable success in lower levels of hockey, the NHL is several jumps in weight class in terms of competition. Overall, his year-to-year comparison looks like this: 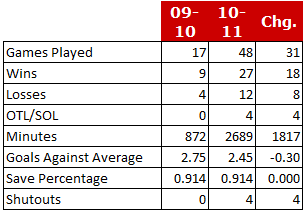 Game to Remember… October 27, 2010. Neuvirth led the Caps into RBC Center to face the Carolina Hurricanes in the Hurricanes’ home opener. He and the Caps proved to be rude guests, spoiling the ‘Canes’ party with a 3-0 shutout. Neuvirth stopped all 29 shots he faced, including one spectacular post to post lunge to glove an Eric Staal drive off a cross-ice feed from Sergei Samsonov. It was Neuvirth’s first NHL shutout, one of four he would have for the season.

Game to Forget… February 25, 2011. The game would be remembered as the one in which Mike Green was lost on his second shift to a hit from Derek Stepan, but this game against the New York Rangers was certainly one to forget if you were Michal Neuvirth. The Rangers scored seven seconds after Green was crumpled to the ice, former Cap Steve Eminger beating Neuvirth to open the scoring. When Brian Boyle scored with 24 seconds left in the game, it left Neuvirth having allowed six goals on 28 shots.

Post Season… Neuvirth was given the keys to the car, being selected as the number one goalie for the playoffs. And for the first round, it seemed the right choice. Against the Rangers he was 4-1, 1.37, .946, with one shutout and two wins in overtime. He could not match that performance in the second round, though, losing all four games to Tampa Bay with a 3.74 GAA and .867 save percentage. Perhaps most important, he allowed the game’s first goal in each of the four games in the Lightning sweep.

In the end, it might be helpful to step back and realize that like his chief competitor, Semyon Varlamov, Neuvirth came into this season at the age of 22, hardly at the top of his prime producing years. That he had not lost a playoff series through junior and the AHL made for a nice narrative, but was pretty much irrelevant to his performance in an NHL playoff setting. More than any Cap, he might win for losing here. Having experienced the difficulties of the Tampa Bay series, perhaps he can use that as a springboard for a much better, more resilient performance next season.

The regular season offered clues as to what sort of goaltender Neuvirth could be. His taking the team on his shoulders in the first six weeks of the season showed he could bear a significant load. Except for a five game stretch when he went 0-3-2 (four of the losses coming in the Caps’ eight game losing streak), he was 27-9-2, 2.37, .918, quite respectable for a rookie. And let’s not forget, Neuvirth was a rookie. Among his rookie class he finished third in wins (playing significantly fewer games than the two goalies ahead of him, Corey Crawford and Sergei Bobrovsky), third in goals against average, sixth in save percentage, and tied for the lead in shutouts.

However the drama surrounding the matter of where Semyon Varlamov will play finally ends, Neuvirth would be expected to be the number one goaltender heading into training camp in September. It will be new role for him to play at this level, and one hopes that in that role he has a finish to his 2011-2012 season at least as strong as his start to the 2010-2011 season. If he does, then the Caps might finally win that race to the Stanley Cup.

(Photo: Bruce Bennett/Getty Images North America)
Posted by The Peerless at 3:48 AM

Email ThisBlogThis!Share to TwitterShare to FacebookShare to Pinterest
Labels: 2010-2011 by the tens, Michal Neuvirth, the peerless prognosticator, Washington Capitals