Day four of the on-ice portion of Caps Development Camp 2011, and the cousins were in tow today. Guys, what did you think?


“What’s with the sign, cuz? ‘Home of the Washington Capitals?’ Did folks think they were in the food court?” 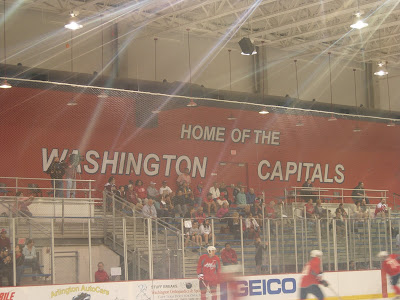 Be nice, Cheerless. Fearless, what did you think of today’s scrimmage?


“Ah, hockey in July. Makes one pine for the new season, the chill in the air, the pucks ringing off the glass, the skates digging into the freshly laid ice, and…"
O-o-o-o-o-kay. Well, fans were treated to an early edition of hockey at Camp Iwannabeacapital. Team Red and Team White went at it in a spirited fashion, and apparently the early hour of today’s scrimmage found a few campsters in ill mood. Like Danick Paquette for Team White. Having later called himself “a pretty dirty player…like Matt Cooke,” he had what amounted to a “Matt Cooke Hat Trick”… a goal, a fight, and he put another player out of the game with an iffy hit. And that didn’t even include his taking a run at a guy when he started charging from the blue line to try and line him up behind the net (he missed). If Cooke and Darcy Verot had a love child, he might be it.

Then there was Garrett Mitchell, who had…well, a “Garrett Mitchell Hat Trick.” A goal, a fight, and the game winner in the Gimmick. That said, he was probably the best player this morning for Team White.


“Don’t forget Scott Wietecha, cuz…”
I was getting to that, Cheerless. Wietecha was the Team Red opponent in each fight involving Paquette and Mitchell.  Some hockey players do more before 10 o'clock than you or I do all day.


“Well, he IS a Bulldog, after all, isn’t he cousin?”
Why yes, Fearless, a Ferris State alum.


“And a jackal, too…”
Yes, Cheerless, he had a few games with Elmira in the ECHL, too. Now, if we can get back to the hockey… speaking of which, it was Team White coming out on top this morning, 4-3 in a Gimmick, Garrett Mitchell getting the only score in the trick shot competition. Team White might consider itself fortunate, having given up a 3-1 lead in the third period on a pair of goals by Travis Boyd, who had an excellent game overall and would have won the scrimmage’s first star, had there been such a thing.

But before Boyd’s theatrics, David Civitarese chipped in a goal to go along with Mitchell’s and Paquette’s for Team White, while Reid Edmonson got one for Team Red. And in that respect, it was a bit of an odd contest. There were other prospects that one might have thought would stand out a bit more, players such as…

Stan Galiev… who is certainly a smooth skater. He had his chances this morning for Team Red, but wasn’t able to solve either Steffen Soberg or Philipp Grubauer in goal for Team White. What others have said about him looked true. He has the skill set to move up the developmental chain, but he’s going to have to become a sturdier player.

Mattias Sjogren…who was largely silent at the offensive end, but he played well in his own end. One might have thought that he would struggle against quicker players, but his experience (he is the oldest player here) served him well. He seemed particularly effective when he was sent out most often against…

Cody Eakin… who didn’t have a memorable morning. Maybe it is that he has played a lot of hockey this year (56 regular season games, 19 playoff games), maybe it was the early start, or maybe he’s pointing more toward training camp in September, but he didn’t look especially effective in this scrimmage. But even with that and watching him skate, one had the feeling that there is another gear or two there.

Dmitry Orlov… Often it is the case that if you can’t find anything to say about a defenseman, the better it is. Well, there wasn’t a lot to talk about in Orlov’s morning for Team Red, except for a deft pass he threw into space to spring Brock Montpetit on a breakaway.  Other than that, a pretty good morning.

Patrick Koudys was another defenseman who had a somewhat quiet game… in a good way as well. Solid in both the offensive and defensive zones, he chipped in a couple of assists and relied more on position and smarts in his own end to keep Team Red attackers to the outside.

So guys, what did you think of your first visit to Kettler?


“It certainly is a nice place to watch practice. And I was noticing something…”
What’s that, Fearless?


“Down there at the far end of the ice…those four posters of players with retired numbers…"
Yeah?


“Well, there’s all that space over there on the left…looks like they have room for a new poster.” 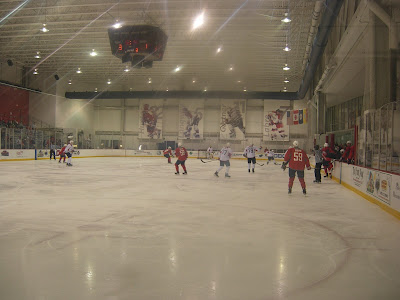 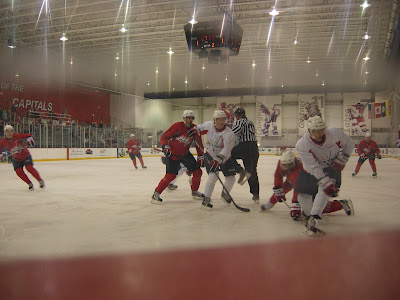 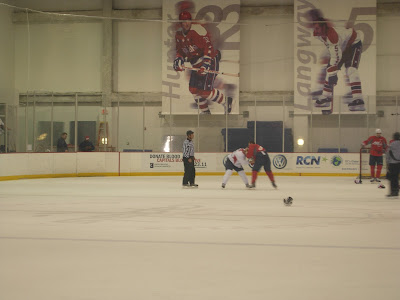 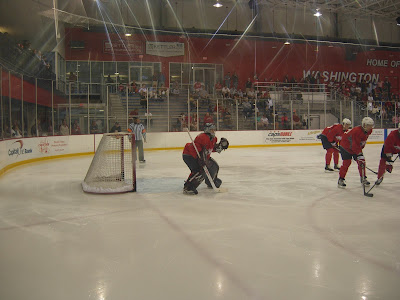 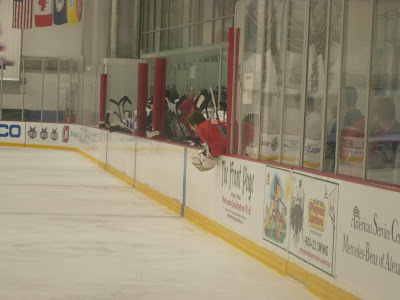 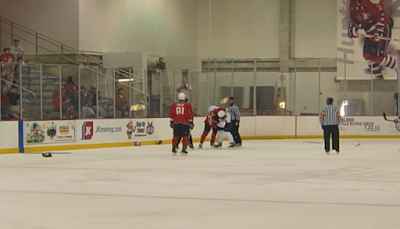 I think the Peerless should come out and scout the Kettler recreation leagues for fun...if for no other reason to point out how bad the refs are

Cheerless was rejected when he applied to wear the striped shirt