Well, we’ve looked at the Young Gun parts, what about the sums? Hockey has a long and rich history of lines among forwards. Skilled forwards and a catchy name makes for a lasting legacy. “The French Connection,” “The Production Line,” “The GAG (Goal-a-Game) Line.” Fans remember such things. But we wonder if in today’s game the successful chemistry isn’t between two players. The Sedin twins, Kane and Toews, Perry and Getzlaf, St. Louis and Stamkos, Crosby and any winger you put with him (ok, that one…not so much).

For the Caps, the Young Gun forwards have three possible pairings – Alex Ovechkin/Nicklas Backstrom, Backstrom/Alexander Semin, Ovechkin/Semin. How do these pairs stack up in terms of their success and winning?


The Match Made in Heaven…or in the Top Five of the Draft.

Alex Ovechkin was drafted with the first overall pick in 2004 and came into the league in 2005 to immediately make his mark as an elite goal scorer. In 2006 the Caps drafted Nicklas Backstrom with the fourth overall pick to be Ovechkin’s set-up man. Since the Caps started their four-year playoff run, it has been a nice pairing: 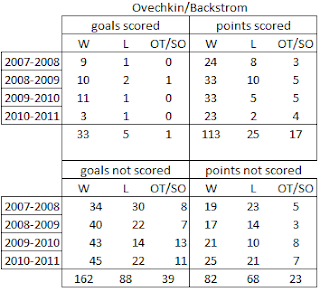 Thirty nine times this pair has scored goals in the same game, and 33 times the Caps have emerged with a win. What is disappointing about the result is not the points percentage (.859) but the fact that the pair managed to score goals in the same game only four times in the 2010-2011 season (the Caps were 3-1-0 in such games). But here is the kicker in that result. The last time the two scored goals in the same game in Game 59 – a 3-2 loss to the San Jose Sharks. In the 23 games that followed to end the regular season the Caps finished 18-4-1. It hardly seemed to matter that the two top scorers weren’t on the same page, at least in terms of combining for goals.

But the difference in team performance was much more striking when Ovechkin and Backstrom combined for points. In 155 games over the past four years in which the pair registered at least one point, the Caps are 113-25-17 (.784 points percentage). In games were the pair does not team up for points, the Caps are 82-68-23 (a .540 winning percentage), and last season the team was only 25-21-7 when the pair did not team up for points (.538). Last season when the each of the pair registered a point, the Caps were 23-2-4 (.862). It is hard enough stopping either of these two, but when they are both producing concurrently, the Caps have become almost impossible to stop.


The Match Made in Fantasy Hockey

Backstrom is an elite centerman. Alexander Semin is an elite winger (or at least has elite talent). They don’t play alongside one another very often, however – mostly out of desperation (when the Caps are struggling on offense or need a jolt to erase a deficit) or on power plays. But how do they do when they make their marks on the score sheet in the same game, even if they are not often partners? What might seem odd about looking at this is that only 17 times in four years have Backstrom and Semin recorded goals in the same game. The Caps are 15-2-0 in those games (.882). 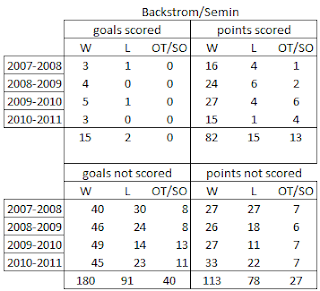 But this pair is also quite formidable when recording points in the same game – 82-15-13 in 110 games in which each records at least one point. And last season Backstrom and Semin combined to score at least one point apiece 20 times in which the Caps finished 15-1-4 (.850). The Caps’ points percentage when the pair record points in games has improved over the past three seasons (.781/.811/.850). Since they generally play of different lines, perhaps a product of more support coming from linemates’ improvement in converting passes or setting them up for their own scores.


The Match Made in Moscow…well, sorta*

Alex Ovechkin…a 50-plus goal scorer in three of the last four seasons. Alexander Semin…a 40-goal talent. You would think that even if this pair didn’t skate together frequently, that the scoreboard would light up with their recording goals in the same game often. 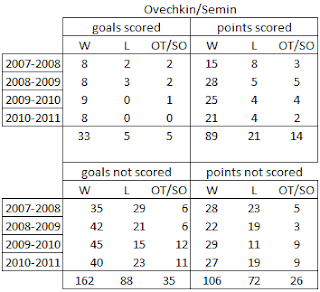 Well, you would be wrong. The Russians have combined for goals in 43 games over the past four seasons, which might seem light when compared with the 39 times Ovechkin and Backstrom scored goals in the same game. That Semin has recorded 22 multiple-goal games in this span might account for some of that. He scores goals in bunches. Think of it this way – Semin scored goals in 103 games over the past four years. Ovechkin scored goals in 106 wins. Semin doesn’t have the goal-scoring consistency to match games in which Ovechkin scores.  Ovechkin is a wildfire that burns long and bright.  Semin is a fireworks show that explodes on a more occasional basis.

Still the Caps are 33-5-5 (.826) in games where the Alexes each record a goal. A better points percentage than when each scores a point in the same game (89-21-14/.774). That points percentage mark when both score points might be a product of a comparatively weak 2007-2008 season in which the Caps finished 15-8-3 (.635) in games where both had points. Since then the Caps are 74-13-11 (.811) in such situations. The odd thing about this pair is that the team’s points percentage when each scores a goal and when each records a point is lower in each instance than the results from the other two pairings. In terms of the relationship of pairs scoring to team success, the Ovechkin/Semin pair is the weakest contributor.

How do the results unfold with other combinations of these Young Guns?...

OK, so what about the trio of forwards? While not really a “line” as is commonly thought of in the NHL, at least on a frequent basis, the three represent the top three scorers on the club. How do they, as a group, related their production to team wins? Well, if the parts are impressive, then it follows that the group would be… 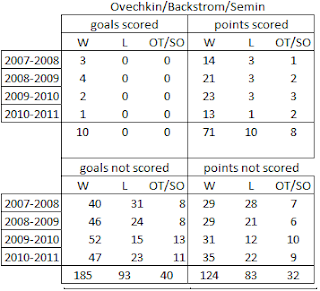 For such a prolific set of scoring forwards, it might seem a bit odd that only ten times in 328 games have the trio of Ovechkin, Backstrom, and Semin scored goals in the same game. They have made the occasions count, though, posting a perfect 10-0-0 record in those games. That the Caps are 185-93-40 (.645, equivalent to a 103-point season) in games where at least one of the three does not register goals reflects on how capable the team around them has become.

As far as points are concerned, the trio have each registered at last one point in a game 89 times with a 71-10-8 record to go with it (13-1-2 last season). In no season did the Caps win fewer than 80 percent of the available points when the three had their “everybody in the pool” games.

What is perhaps most impressive about their performance is that the trio has registered points together in those 89 games. That is 27.1 of all games played and almost 37 percent of the 243 games in which all three appeared.


The Four Caps of the Apuckalypse 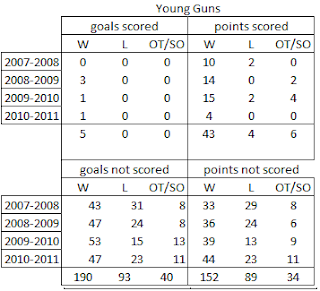 Several things are striking about that last set of numbers. First, the 53 games in which each of the four have recorded points is 16.2 percent of all regular season games played over the past four years. They have all recorded points in 53 of 211 games in which all four appeared – more than a quarter of all of those games. But then there is this – only four times last season did all four appear in a game with each recording a point, none of those occurrences taking place after Game 18, a 6-4 win over the Atlanta Thrashers on November 14th in which the quartet had three goals and three assists among them.  Injuries to Semin (missing 17 of the 64 games following Game 18) and Green (missing 30 of those last 64 games) provided scant opportunity to add to the total.

The overall picture is one of a group of players with tremendous offensive talent. They put on a show individually and as a group. They are a very entertaining quartet, probably no small reason that the Caps draw big crowds in the playoff era. And, when they produce individually or in combination – which is often – the Caps are successful…often. For the most part they have been the best players playing at their best.

In the regular season.

But what about the playoffs? You’ll have to wait for that one.

*  We know that Alexander Semin was born in Krasnojarsk...we're taking some literary license.
Posted by The Peerless at 6:34 PM