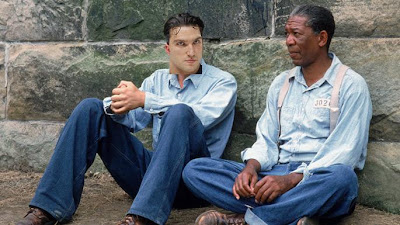 An old con turned minor league hockey player ambles into a locker room. Red finds Ovi sitting against the wall, listlessly taping his sticks. Red waits for some acknowledgment. Ovi doesn't even look up. Red hunkers down and joins him. Nothing is said for the longest time. And then, softly:

Ovi: My old coach used to say I'm a hard man to know. Like a closed book. Complained about it all the time…He was sick, unbelievable. I love him. But I guess I couldn't show it enough... I didn’t win for him, Red. Because of me, the way I am.

Red: That don't make you a bad kid. Immature, maybe. Feel bad about it if you want. But wasn’t just you that didn’t win for him.

Ovi: No. I didn't. We all did, but I wound up here, taping sticks during All Star Game; suspended; hockey writers writing bad things about me. Bad luck, I guess.

Ovi: It floats around. Has to land on somebody. Say storm comes through. Some folks sit in their living rooms and enjoy the rain. The house next door gets torn out of the ground and smashed flat. It was my turn, that's all. I was in the path of Shanny. I just had no idea the suspension would be as long as it is... Think you'll ever get out of there?

Red: To the NHL? Sure. When I got a long white beard and about three marbles left rolling around upstairs.

Ovi: Tell you where I'd go. Stanley Cup finals.

Ovi: In June. Downtown. You know what hockey writers say about the Stanley Cup finals? They say it is sick…unbelievable. That's where I'd like to finish out my season, Red. A loud finals that is sick, unbelievable. Score a couple goals. Win games. Get Cup from Commissioner and skate around... You know, a place like that, I'd need a man who can get me puck; you know, since Nicky’s hurt.

Red: Jesus, Ovi. I couldn't hack it up there. Been down here too long. I'm an AHL institutional man now. Like old Bruce Boudreau was in his playing days.

Ovi: You underestimate yourself.

Red: Bullshit. Down here I'm the guy who can get the puck to you. Up there, all you need are Nicky and Greenie, and maybe Sasha. I wouldn't know where to begin. Stanley Cup final? Hell. Like to scare me to death, somethin' that big.

Ovi: Not me. I didn't hit Michalek that hard, and I didn't have a tantrum about All-Star Game, and whatever mistakes I made I've paid for and then some. That finals and that Cup...I don't think it's too much to want. To take it back to Russia for a couple of days. Touch the names on it. Drink in the water from it. Feel free.

Red: Goddamn it, Ovi, stop! Don't do that to yourself! Talking shitty pipedreams! The finals are out there, and you're in here, doing your time, and that's the way it is!

Ovi: You're right. It's out there, and I'm in here. I guess it comes down to a simple choice, really. Get busy winning or get busy dying.

Ha. Is Ovie saying he needs Aucoin up here?

Ha Ha...I was thinking the same thing. Worth a shot...no?

Red: [narrating] I wish I could tell you that Alex fought the good fight, and Shanny and the Canadian media let him be. I wish I could tell you that - but the NHL is no fairy-tale world. He never said who did it, but we all knew. Things went on like that for awhile - hockey life consists of routine, and then more routine. Every so often, Alex would show up with fresh bruises. The Canadians kept at him - sometimes he was able to fight 'em off, sometimes not. And that's how it went for Alex - that was his routine. I do believe those first two years were the worst for him, and I also believe that if things had gone on that way, this place would have got the best of him