Mike Green
Theme: "Gentlemen, we can rebuild him. We have the technology...Better than he was before. Better, stronger, faster."
--Oscar Goldman

(click pic for larger image)
In 2007-2008, as a 22-year old whippersnapper of a hockey player, Mike Green played in all 82 regular season games for the Washington Capitals, all seven playoff games, and looked as if he hardly broke a sweat doing it as he skated to an 18-38-56, plus-6 season. It all looked so easy and so promising for the youngster.

After that season, though, Green had to grapple with a series of injury problems was the primary factor in his missing 54 games over the next three seasons. From his player page at tsn.ca, here is the list of absences due to injury or undisclosed nature:

It did not let up this season, either. After the Caps sped out to a 7-0-0 start, he missed the next six games to an ankle injury. The Caps had their winning streak end in Green’s first game out of the lineup and would go 2-4-0 in his absence. He returned on November 11th against New Jersey but skated only 7:44, leaving the lineup late in the first period after a collision with Devil forward Ryan Carter.

Green would miss the next 24 games to what was now a groin injury. He would try to return in early January, but skated an uncharacteristically brief 15:43 in his return against Calgary on January 3rd (the same game in which Nicklas Backstrom was concussed by Rene Bourque). Then, four days later and after a transcontinental plane ride to the west coast, he lasted only 7:11 in a 5-2 loss to the San Jose Sharks at HP Pavilion.

To date, Green had played in only ten of the Caps’ first 39 games, but another lengthy absence was about to begin. Green underwent abdominal surgery on January 17th in the hope of repairing his injury once and for all. With the surgery and recuperation, Green missed 18 more games before returning to the lineup on February 18th. He skated 14:14 and did not record a point in a 2-1 loss to the Tampa Bay Lightning in Tampa.

The accumulated rust was hard for Green to scrape off, especially when one considers that much of his game is predicated on his skating ability. Even though he was repaired from his injury, his game never quite achieved any sort of rhythm over the last 22 games of the regular season. He finished with one lonely assist on the score sheet over those games and played to a plus-4. In fact, after his four-point night against the Detroit Red Wings that put the Caps to 7-0-0 at the start of the season, he was 0-1-1, plus-2 over his last 25 games.  Here is how his season compared to last: 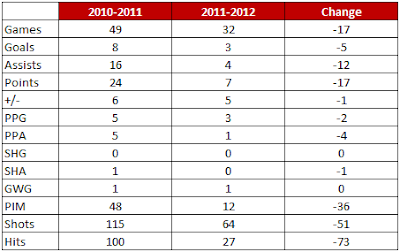 The absences made clearer how important Green is to this team. In the 32 games in which he played, the Caps had a record of 19-10-3 (although yes, there was the 7-0-0 start). The Caps were 23-22-5 in the 50 games Green missed. His underlying numbers went hand in glove with his performance in what were more frequent winning efforts for the club. He had the highest 5-on-5 on-ice Corsi value among Washington defensemen playing in at least 20 games, the second highest relative Corsi value (to Roman Hamrlik). He had the second highest PDO value among this group (John Erskine), largely a product of the team’s shooting percentage when he was on ice being higher than that for any other defenseman.

And then there were the similar measures at 5-on-4. And here, the comparison between Green and Dennis Wideman (who averaged half a minute more of power play time than Green for the regular season) is informative. Each had roughly equivalent on-ice shooting percentages (13.5 percent for Wideman, 13.3 percent for Green). But the on-ice save percentage with Green on ice was .944, for Wideman .900. Wideman was on ice for four of the Caps’ nine shorthanded goals allowed this season, Green for one (and Wideman was also on ice for that one).

Game to Remember… October 22, 2011. With the Caps skating against the Detroit Red Wings on their way to their seventh straight win to open the 2011-2012 season, Mike Green had two goals – both times jumping into the play from the weak side in an oldie but a goodie move -- and two assists to record his third four-point game in the NHL.

Game to Forget… November 11, 2001. Not three weeks after his big night against the Red Wings, Mike Green took the ice against the New Jersey Devils, his first game back after missing six games with an ankle injury. He lasted only into his eighth shift of the game, when he collided with Devil forward Ryan Carter as he was trying to step around Carter from the corner in the defensive zone. The Caps would win that game, 3-1, but Green would miss 24 games over which the Caps went 11-11-2.

Post Season… In 36 playoff games in his career before this season, Mike Green was potent on offense (5-19-26), but like the rest of his teammates somewhat less so on defense (minus-6). Although he was not the offense-oriented player he had been in previous post-seasons, Green was perhaps well suited for the style of hockey Dale Hunter wanted to deploy in the playoffs. Not all of “Hunter Hockey” is collapsing to the crease and blocking shots. Green could relieve pressure with his skating ability, which – while still not back to that which fans might recognize – certainly is still superior to most NHL players at his position. Despite skating more than 330 minutes in 14 games (third highest among defensemen on the club), he was on ice for only six goals (four at even strength), the fewest of those defensemen playing in 10 or more games.

In the end… The hope is that the surgery Green had to repair his groin injury puts to rest his checkered injury history over the past few years. In returning to the lineup for the stretch run one could see the same fluid stride that has marked his play with the Caps, just not quite at the speed that accompanied it in healthier times. Green and the club are at a crossroads. The injury aside, he has retooled his game to become a more complete defenseman than he might have been three or four years ago. Just in time, in that his contract expires this summer, and as a restricted free agent will be negotiating a new contract to make him either a long-term cog in the Caps’ plans or to get him to unrestricted free agency status where a large payday would seem to be just as likely. The question now is, having been rebuilt is he worthy of being the “Six Million Dollar Man?”

Email ThisBlogThis!Share to TwitterShare to FacebookShare to Pinterest
Labels: 2011-2012 BY THE TENS, Mike Green, NHL, the peerless prognosticator, Washington Capitals