The home team won for the sixth time in the Eastern Conference quarterfinal series between the Washington Capitals and the New York Rangers when the Rangers held off the Capitals, 1-0, at Madison Square Garden on Sunday afternoon.

One was all the Rangers needed in this one, thanks to a 27-save effort by goalie Henrik Lundqvist, who earned his seventh career playoff shutout.  Derick Brassard scored the game’s only goal mid-way through the second period, when from his perch at the top of the offensive zone he let fly with a slap shot that might have hit two Capitals on its way to the net before bending down and under goalie Braden Holtby’s glove into the back of the net.  It might have avoided Jason Chimera out front, but it certainly seemed to hit defenseman Steve Oleksy’s arm on its way to the net.

And so, the hockey gods smiled on the Rangers.  The Capitals could not solve Henrik Lundqvist on any of their 27 shots, and it set up a seventh game at Verizon Center on Monday night.

-- The hockey gods were not the only ones smiling on the Rangers in this game.  The Rangers were not charged with any infractions until the teams had a full-on scrum at the conclusion of the game.  It was the first time that the Caps did not have a single power play in a playoff game since Game 7 of the Eastern Conference semifinals against Pittsburgh in 2009. 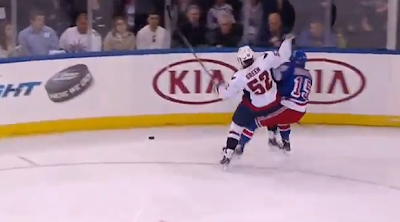 ...Having done it poorly (Dorsett was the one who tumbled to the ice) makes no difference.  Coming as it did near the boards, it was a dangerous play.

-- And there is a difference between “cold” and “playing poorly” (not that the usual talking heads will acknowledge it).  Twelve shot attempts, five on goal, three hits, two blocked shots.  If there was a surprising number in there, it was 19:03 – his time on ice.  But then again, that’s what having no power plays will do.  Only Mike Green had more time on ice in this game (23:40, like Ovechkin all at even-strength).

-- If you are wondering, the Caps have gone into a Game 7 five times in team history having lost Game 6.  They have one win in those instances, that one coming last year in the Eastern Conference quarterfinal series against Boston.

-- There were 22 faceoffs in the Capitals’ end of the ice, 11 in the Rangers’ end.  A lot of that was the power play differential, but some of it was the territorial advantage the Rangers had in this game, too.

-- Of those 11 offensive zone faceoffs, the Caps won three, only one of those wins coming in the third period (1-for-4).

-- Tom Wilson played only 5:12 in this game, only one shift in the third period (that lasting one second).  Part of that was his having an equipment problem, but we wonder if the spare ice time is having effects on how the third and fourth lines are assembled over the course of a game and the effects on continuity.

-- A curious dynamic on the Ranger side…Brad Richards getting only 9:34 of ice time and only two shifts in the third period.  He hasn’t played well in this series, but this seemed to be an odd time to be sending a message to Richards, if that was what was going on.  Of course, if Richards has a big Game 7, John Tortorella will look like a genius.

-- You would not think energy would be an issue in Game 7, but the way ice time was parceled in Game 6 among the players of each team does raise the question with the second half of a back to back coming up.  The Rangers had two forwards with fewer than five minutes of ice time – Chris kreider and Arron Asham.  That meant guys like Ryan Callahan (22:22) and Derek Stepan (23:27) were out past their usual bedtime in terms of ice time.

So, another Game 7.  It is not what we prognosticated, but this will be the seventh time in the last nine playoff series for the Caps that they will face a Game 7.  It is not exactly a surprise.  If there is a ray of sunshine to take out of this game it is that the Caps did not play especially well, got no benefit of the doubt in the way the game was called, gave up a bit of a fluky goal, and still lost by only the thinnest of margins.  But thin margins are a staple of playoff hockey, and the Caps find themselves too often on the wrong side of them.  They have one more chance to make things right, or spend another off-season wondering, “what if?”