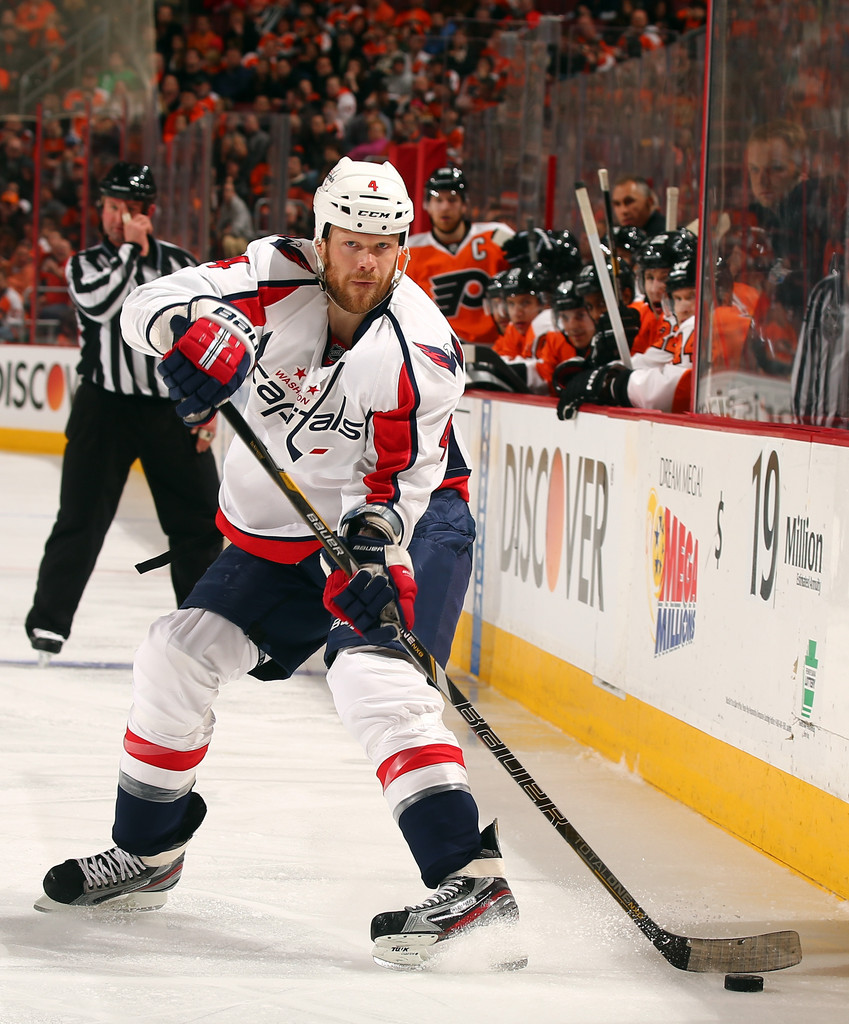 “Success, remember is the reward of toil.”

When the 2013 season started, the Washington Capitals had a depth chart for defensemen that might have looked like this…
One of the odd men out in that scenario was John Erskine, who between assorted injuries (shoulder, lower body) and healthy scratches was coming off a 2011-2012 season in which he played in only 28 games.

Erskine’s 2013 season was not much different from his 2011-2012 season with respect to the injury bug – he missed 12 games in March due to an upper-body injury – and he missed another three games in February for elbowing Wayne Simmonds of the Philadelphia Flyers.  But he did dress for 30 games, and by the end of the season, with Hamrlik waived and off to the New York Rangers, Orlov injured and trying to rehabilitate his game with the Hershey Bears in the AHL, and Hillen injured in the first game of the season and trying to work his way back into the lineup after missing 25 games, Erskine found himself by year’s end on the second defensive pairing with John Carlson.

For Erskine it was a productive year, in the technical sense of the term.  While his 0.10 goals-per-game was modest, it was the best such mark he posted over an 11-year career.  His 0.20 points-per-game was his best since posting a 0.24 points-per-game mark in in first year with the Capitals in 2006-2007.  He was plus-10 over 30 games, a plus-27 pace over 82 games, also a career best.  His 32 shots on goal in 30 games was the only season in his career in which he averaged more than a shot per game.

The problem for Erskine was, as it has been in so many of his seasons with the Capital, injuries.  In seven years with the Caps, Erskine has missed 121 games to injury or illness (tsn.ca), including the 12 he missed in the 2013 season due to an upper body injury.

The thing is with that pairing is that Erskine’s influence – or at least his presence – had a salutary effect on Carlson.  When on ice together, Carlson’s 5-on-5 goals for were better (0.939 GF/20 vs. 0.824 GF/20 when apart), the goals against were better (0.692 GA/20 vs. 0.733 when apart, numbers from stats.hockeyanalysis.com).  There was not a lot of ice time with these players spent apart, but in terms of even strength outcomes, Erskine did not appear to be a liability.  Of course, that also might be tempered by the fact that the top four forwards with whom Erskine shared 5-on-5 ice time ice time were, in order: Mike Ribeiro, Alex Ovechkin, Troy Brouwer, and Nicklas Backstrom. 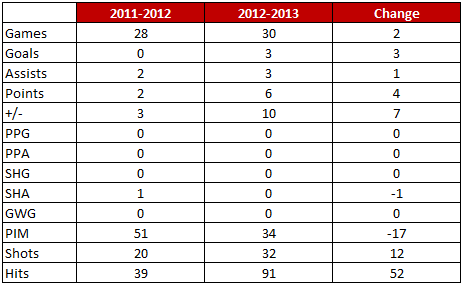 Odd Erskine Stat… John Erskine scored three goals for the Caps this season, all of which came at Verizon Center, and all of which came in noteworthy games.  His first of the season put the Caps ahead to stay in what would become Adam Oates’ first win as head coach, a 3-2 win over the Buffalo Sabres on January 27th.  His second goal came on February 26th in a 3-0 win over the Carolina Hurricanes, which spoiled Alexander Semin’s first game in Washington since leaving the club in free agency after the 2011-2012 season.  His third goal came on March 7th in a 7-1 win against the Florida Panthers.  His goal, the first of the contest, set in motion a four-goal barrage in 6:12, the second-fastest four-goal start in team history.

Game to Remember… April 23rd vs. Winnipeg.  John Erskine was the emergency goaltender of sorts on the evening on which the Capitals clinched the Southeast Division title.  Just one minute after Matt Hendricks scored for the Caps to post the home team to a 1-0 lead, Erskine dove through the crease to block a Bryan Little shot that was targeted to the back of an empty net.  Then, with the clock ticking toward 6:00 remaining in the first period, it was Erskine again, sweeping the puck off the goal line after a deflection of a shot by Aaron Gagnon (who Erskine was tying up in the low slot) hit goaltender Braden Holtby and climbed over his shoulder to fall into the crease.  Erskine added an assist on the goal that would give the Caps the lead for good, and as if to punctuate his performance, took an unsportsmanlike conduct penalty with 22 seconds left in the 5-3 win.

Game to Forget… February 12th vs. Florida.  Florida proved a pesky adversary on this night.  The Caps scored first, but Florida took leads on three separate occasions, taking a 5-3 lead on goals straddling the second intermission, both of which Erskine was on ice for, making it a total three such on-ice goals for Erskine in the game.  He added a penalty for good measure.  It was the only game all season in which Erskine finished as bad as minus-2.

Post season… Live by the second pairing, die by the second pairing.  Erskine tied with John Carlson – his second pairing defensive partner – for the most goals scored against the Caps while on ice (eight) in the seven-game loss to the New York Rangers.  He also did not finish any of the seven games against the New York Rangers in plus territory (minus-4 overall).  He is not expected to provide anything more than serendipitous offense, but he did not record a shot on goal in any of the last three games of the series and was last among Caps defensemen in that regard overall (six shots on goal for the series).

John Erskine almost never lacks for effort, but one still has the feeling that he would be a much better third-pair defenseman than a solution as a second-pair defenseman with John Carlson.  It was the second pair that was exploited by the New York Rangers in the playoffs, denting it for half of the goals the Rangers scored in the series.  When Erskine was getting significant minutes against the Southeast Division, he was fine – 2-2-4, plus-10 in 12 games.  But in 25 games outside the division (including playoffs), he was 1-2-3, minus-4.  In a sense Erskine is the canary in the coal mine, the signal of questionable blue line depth.  Circumstance led to Erskine taking second pair minutes this season – Roman Hamrlik not performing as expected, then waived; Dmitry Orlov and Jack Hillen suffering injuries, the inability of Jeff Schultz to dent the lineup.  That does not mean Erskine is a solution at that position.  Hard worker though he is, there are better ways to employ his effort.