“Failures are finger posts on the road to achievement.”
-- C. S. Lewis

Perhaps “failure” is too strong a word to describe the 2013 season Marcus Johansson had for the Washington Capitals.  After all, despite missing a quarter of the season to the dreaded “upper-body injury,” Johansson did finish seventh on the team in total points scored, he was fourth on the club in shooting percentage, he finished tied for fourth in assists, and he was fifth in power play goals scored.

That is the positive spin, though.  The other side of the coin is that Johansson put up these numbers having skated far more of his 450 minutes at 5-on-5 with Alex Ovechkin (328) and Nicklas Backstrom (324) than he did with any other forward.  In fact, Johansson did not spend as much as 75 minutes at 5-on-5 time with any other forward in his 34 games of the season, and only with Troy Brouwer (73) did he skate more than 50 minutes.

Johansson skated the majority of his 5-on-5 ice time with most talented linemates the Caps had to offer, and he scored one even strength goal in the presence of Ovechkin and Backstrom on the ice all season (March 21st in a 4-0 win over Winnipeg).  He did have more of a presence in a support role – ten of his 13 5-on-5 assists were recorded with Ovechkin on the ice, eight of them with Backstrom centering him – but Johansson did not state with authority that he was the long-term solution at left wing on the top line.

But here is the difference.  In 2011-2012 Johansson skated more 5-on-5 time with Alex Ovechkin than with any other forward, but he skated almost as much 5-on-5 ice time with Alexander Semin.  Johansson being primarily a center last season, he was shuttling more between lines.  He spent more than 100 minutes of 5-on-5 ice time with six different forwards, and it was rather impressive that the Caps team goals scored at 5-on-5 per 20 minutes (GF20 at stats.hockeyanalysis.com) were better for five of those forwards when skating with Johansson that when they were apart, Semin being the exception.

One might have expected that with more regular linemates, especially those being the top line center and top line right wing, the continuity and the growth one might have anticipated in his game would have resulted in more offensive production.  And let us face it.  Johansson’s contributions are going to come primarily at the offensive end of the ice.  Although his goals scored against while on ice were certainly acceptable (seventh lowest among the 14 Capital forwards playing in at least 20 games), he did not spend much time killing penalties (ninth most penalty killing minutes per game among forwards).  Neither is he an especially demonstrative player physically.  He had only 14 hits and four penalty minutes in 34 games this season and has only 22 penalty minutes in his 183-game career with the Caps. 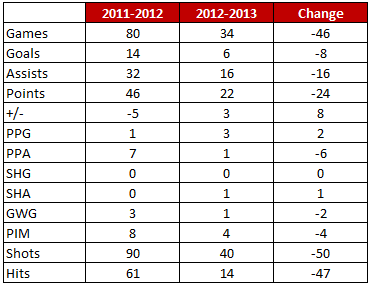 Odd Johansson Statistic… “Three.”  There were 337 forwards who played in at least 30 games in the NHL this season.  Only three – Philadelphia’s Matt Read, Detroit’s Drew Miller, and Winnipeg’s Kyle Wellwood – recorded fewer penalty minutes than the four recorded by Marcus Johansson.  For the record, it was Johansson tripping Read in a 5-4 overtime Flyer win on March 31st, and he got caught up with a coincidental minor with Carolina’s Jeff Skinner in a 3-2 Caps win on April 11th.

Game to Remember… April 2nd at Carolina.  The Caps were at a precarious point of their season.  After a 2-8-1 start they made a slow climb through the standings, but they still found themselves on the outside looking up at the top-eight in the Eastern Conference, and the Caps still had not reached the .500 mark on the season after 35 games.  The Caps had their third chance in four games to reach the .500 mark when they visited Carolina on April 2nd.  It was a back-and-forth affair, the Hurricanes scoring the first two goals of the contest before the Caps scored two to tie it.  Carolina took the lead again barely a minute after the Caps tied it, 2-2, but Washington tied it again less than three minutes later.  The Caps finally took the lead midway through the second period on a goal by Alex Ovechkin on which Johansson recorded an assist.

Then, Carolina got caught on the wrong side of one of those “high-risk, high-reward” situations.  On a power play the Hurricanes elected to put defensemen Marc-Andre Bergeron and Joe Corvo on the ice at the same time, both of whom are talented offensive players but who are, to put it delicately, adventures on the defensive side of the puck.  Bergeron made a ghastly play at the Capitals’ blue line, trying to hit Eric Staal with a pass just as he entered the Caps’ zone.  The pass was off target, rebounding off the side boards.  Johansson fought through Staal to get the puck and headed up ice with Joel Ward, only Corvo back for Carolina.  Corvo could not decide whether to defend the shot or the pass or the beer vendor in the stands, did none, and Johansson lofted a pretty saucer pass that was right on the tape of Ward’s stick for the goal and a 5-3 Caps win.

Game to Forget… January 25th at New Jersey.  In almost 17 minutes of ice time, Johansson managed to attempt one shot on goal (a miss), did not have a hit, a takeaway, or a blocked shot, lost six of nine faceoffs, and was on ice for both the Devils’ first goal of the game and the last one, a blast from Ilya Kovalchuk, just moments after Johansson was just a half second late getting in the way of a shot that might have disrupted New Jersey’s ability to keep the puck in the zone leading up to Kovalchuk’s game-winner.

Post-Season… Like so many of the Caps, Johansson’s post-season was utterly forgettable.  Well, almost.  At least he had the game-winning goal in Game 1, the product of a gorgeous stretch pass from Steve Oleksy that found Johansson behind the New York Ranger defense for a breakaway.  That would be the high point of his series.  In the other six games Johansson was 0-1-1, minus-3, and was on ice for only one goal for the Caps in those last six games.  In other words, Johansson did not have an especially bad series in the context of the performance of most of his teammates.

This was more a “sideways” kind of season for Johansson.  His profile as a player is coming into focus.  He is primarily an offensive player, although he is not a bad defensive performer.  He is a superior skater with fine speed, but he lacks a physical dimension to his game.  What was unsettling about this season --- what gave it its “sideways” quality – was that he was too much the passenger on the line on which the team depended for consistent and significant offense.  It is sometimes useful to remember that Johansson will not be 23 years old until just before the puck drops on the 2013-2014 season and that he has fewer than 200 games of NHL regular season experience.  It also helps to step back and examine his production with a cool eye.  Doing so, one can see that he has in fact made progress.

On the other hand, he is entering a phase of his career in which he can settle into being a 45-50 point player – productive to a point and capable of making contributions from time to time.  Or, he can take that next leap to being a 55-60 point player and a player of consequence on a scoring line.  That will be the next finger post on Johansson’s career road.