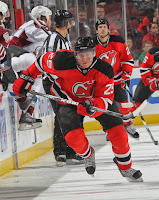 The Washington Capitals made a minor deal on Thursday, claiming defenseman Alexander Urbom on waivers from the New Jersey Devils.  Urbom, a 6’4”, 215 pound blueliner, has played in 14 NHL games over three seasons.  Last season he spent most of his time with the Albany Devils in the AHL where he finished 0-8-8, minus-3 in 68 games.  This is, as noted, a minor deal in the larger scheme of things, and Caps fans might be wondering, “why?”  It got us to thinking about depth defensemen in general.

Defensemen are always at a premium in the NHL.  This goes for top-end headliners, certainly, but to a certain extent it goes for depth defensemen, too.  Since the 2004-2005 NHL lockout the Washington Capitals have dressed, on average, 11 defensemen per season, including 12 in last year’s lockout-shortened 48-game season.  The range has been from nine defensemen (in 2005-2006 and 2007-2008) to 13 (in 2008-2009).  Given that a club can dress only six defensemen a night (except in those rare instances in which they might dress seven), having a defenseman that can step in, in a pinch, is a valuable commodity.

And, we do not just mean roster defensemen.  If a team carries seven defensemen, chances are that seventh defenseman will get minutes.  But, to use the Caps’ example, that means that four defensemen (on average) not on the roster are going to have to fill in from time to time.  Those players might be in Hershey, they might be obtained in trade in-season.

Let’s look a bit more closely at the Caps’ experience in this regard over the past eight seasons since the 2004-2005 lockout.  Over those eight years the Caps have averaged three defensemen per season who played in at least 70 games.  That leaves, on average, three spots per night that are going to have multiple players at each slot logging significant games.  If you look at the bottom three defensemen in games played over each of those eight seasons they averaged 13 games played, per man, per season.  Those are, on average, the 9/10/11 defensemen in the system (given the average of 11 defensemen used per season).  Let’s look at these defensemen in more detail.

The bottom three defensemen in games played in the first year out of the lockout were: Mathieu Biron (52 games), Nolan Yonkman (38), and Mike Green (22).  This was the first year out of the 2004-2005 lockout, and the Caps were in the midst of their tear-down/rebuild .  Biron, a journeyman defenseman having played with three teams in over five seasons, was a free-agent signing in the summer before that 2005-2006 season.  Yonkman, a 1999 draft pick for the Caps, was playing in his first full season with the club after appearing in 12 games over two seasons before the lockout.  These last three defensemen were obtained as follows:

The bottom three defensemen in this season in games played were: Lawrence Nycholat (18), Timo Helbling (2), and Jamie Hunt (1).  Nycholat, an August 2005 free agent signing by the Caps, played the entire 2005-2006 season in Hershey and would split time between Hershey (29 games) and Washington (18 games) in the 2006-2007 season before he was traded to Ottawa in February 2007.  Helbling was an August 2006 free agent signing by the Caps who spent 49 games in Hershey and two with the Caps before being shipped to Buffalo with Dainius Zubrus for Jiri Novotny and a draft pick in February 2007.  Hunt was signed as a free agent by the Caps in March 2006 and played in one game with the big club in 2006-2007 after spending 36 games in Hershey.

This was a different mix, a different set of circumstances in an up-and-down (or, more precisely, a down-and-up) year for the Caps.  Among the bottom three defensemen in games played, Brian Pothier played in 38 games, Steve Eminger played in 20, and Sami Lepisto played in seven contests.  Pothier – a July 2006 free agent signing – is on this list because his season ended on January 3rd, the victim of a concussion when he was hit by Milan Lucic and tumbled into the boards.  Eminger – drafted in 2002 by the Caps -- more or less was Pothier’s replacement, appearing in 18 of his 20 games that season after Pothier’s injury.  Lepisto – a 2004 draft pick for the Caps – was brought up for a seven-game look-see in late-February, spending most of his season (55 games) in Hershey.  It is worth noting that this was one of the seasons in which the Caps dressed only nine defensemen all season, making the absence of call-ups or other players coming to the club via other lesser transactions understandable.  It is also worth noting that Hershey did Josef Boumedienne on its roster, a player who played in 43 games for the Caps over the 2002-2003 and 2003-2004 seasons.

If 2007-2008 was a season of comparatively few defensemen dressing for the Caps, the 2008-2009 season was just the opposite.  Thirteen defensemen dressed for the Caps in this season.  The bottom three in this instance included: Brian Pothier (9), Sami Lepisto (7), and Staffan Kronwall (3).  Pothier was coming out on the back side of his injury suffered the previous season, rejoining the club on March 16th and playing in nine games thereafter to close the season.  Lepisto got seven more games, this time early in the season while spending 70 games with Hershey.  Kronwall was claimed off the waiver wire from Toronto in February 2009.  He then split time between Hershey (17 games) and Washington, where he appeared in three games over a 17-day period late in the season.

It is worth noting, given the large number of defensemen who dressed for the Caps in this season that Bryan Helmer, a defenseman who already had played 15 seasons in the AHL, plus another 63 games with Hershey in 2008-2009, but who had only 134 games of NHL experience over six seasons in the NHL (and had not played in the NHL in three seasons) appeared in 12 games for the Caps.  There is also Sean Collins, who split time between Hershey in the AHL and South Carolina in the ECHL over the 2006-2007 and 2007-2008 season, playing in 15 games for the Caps in his first NHL action.

This was another of the “prospect” years.  Among the bottom three defensemen in games played were: John Carlson (22), Karl Alzner (21), and Joe Corvo (18.). Carlson and Alzner were both first round draft picks.  Carlson was brought up for short stints from Hershey in November and January, but he stuck with the team when brought up in early March.  Alzner, who got a 30-game audition with the club in 2008-2009, got an early look in the 2009-2010 season, but after playing in 21 games was sent back to Hershey to finish the regular season in February 2010.  Joe Corvo was the product of a trading deadline deal, brought in from Carolina for Pothier, Oskar Osala, and a draft pick.  He was a rental who departed from whence he came – Carolina – after the season.

The bottom three defensemen in games played this season included: Dennis Wideman (14), Brian Fahey (7), and Sean Collins (4).  Wideman was another trading deadline deal, sent to Washington by Florida for Jake Hauswirth and a draft pick.  He lasted only those 14 games, though, suffering a leg injury on March 29th that ended his season.  Fahey, a July 2010 free agent signing by the Caps, got his games early in the season as part of the revolving door that was replacing injured Tom Poti.  Fahey spent 60 games in Hershey that season.  Sean Collins, a March 2007 free agent signing, was also part of that depth contingent, getting his games late it the campaign by which time Poti’s season was over.  He spent 73 games in Hershey.

This was a bit of an odd, injury driven year that was most notable for Dmitry Orlov getting 60 games as a rookie while Mike Green and John Erskine spent a large part of the season injured.  Erskine was, in fact, one of the bottom three defensemen in games played (28).   The others were Tomas Kundratek (5) and Sean Collins (2).  Kundratek was picked up during the season in a trade that sent Francois Bouchard to the New York Rangers.  He had split time between the Connecticut Whale and the Hershey Bears in the AHL before getting a look with the Caps in January.  Collins, who would spend almost all his time in Hershey, spent two games with the Caps in late October owing to the uncertain health of Erskine (who at that time was not cleared for contact with a shoulder injury) and Mike Green, who had an ankle injury.

In 2012-2013 the bottom three defensemen in games played reflected three different situations.  Dmitry Orlov might have played in more than five games, but his suffering a concussion in the AHL Showcase game at Verizon Center left him with almost a lost season, whether in Hershey or in Washington.  Roman Hamrlik played in four games, all early in the abbreviated season, fell out of favor, and was waived by the Caps in early March.  Cameron Schilling, who the Caps signed as a free agent out of Miami (Ohio) University in March 2007, got one game in March 2013 when John Erskine and Tom Poti were out with injuries.  It is worth noting that the injuries to Poti, Erskine, and Mike Green meant that large blocks of games would be taken up by Steve Oleksy (a free agent in Hershey who would play in 28 games), and Kundratek (who would play in 25 games before sustaining an injury himself).

What we have are 21 defensemen who at one time or another represented those last three defensemen called upon in terms of games played in a season for the Caps.  Of that group, here is how they break down by acquisition:

Of the drafted group, four were first round picks, and two more were second rounders.  These were prospect either called up for a look or pressed into duty maybe a little sooner than anticipated due to injuries among other defensemen.  Fourteen other defensemen in this group came to the club via trade, waiver claims, or free agent signing.  The Brian Pothier and Roman Hamrlik free agency signings can be thought of as significant roster moves.  The others, though, were largely minor deals.  Then there are the significant blocks of games taken up by players not in this “bottom three” group who might have been expected, under normal circumstances, to spend their entire seasons in the minors – Tyler Sloan getting 26 games, Sean Colins getting 15, and Bryan Helmer getting 12 in the 2008-2009 season; Sloan getting 40 games in 2009-2010 and another 33 in 2010-2011; Dmitry Orlov getting 60 games in 2011-2012; Steve Oleksy getting 28 games and Tomas Kundratek getting 25 last season.

It points to a need for players you do not think will be seeing time in Washington being “on call.”  No team is going to make it through a season with seven roster defensemen.  There might be trades in-season that will provide additional assets at the position.  But that is discussion for another day.  At the moment, Alexander Urbom is already on the list of what can be called "depth defensemen."  There are others in Hershey that can be added to this list, too.  The contingent there that might be called upon to fill one of those “last three” defensemen the Caps dress this season might include such names as Cameron Schilling, Nate Schmidt, Patrick Wellar, or Patrick Wey.  But there is not a lot of NHL experience there (one game, in fact).

Who knows…given what might be the situation with Connor Carrick (if he is sent back down to junior or Hershey), and the inevitable injuries and iffy play that occur during an 82-game season, Urbom -- and perhaps some of those others in Hershey -- might end up with some real minutes with the big club before it’s over.