The Peerless Prognosticator is ON THE AIR!!! -- Game 24: Capitals at Maple Leafs, November 23rd

Less than 24 hours after hosting the Montreal Canadiens, the Washington Capitals take to the road to face the Toronto Maple Leafs at Air Canada Centre.  They take their hockey seriously up there.  How do we know this?  Here was the lead story on the Web site of the Toronto Sun on Friday evening… 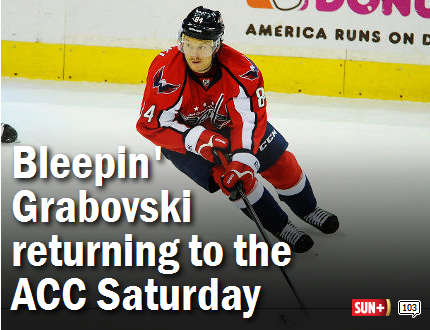 Then there is the sports cover at the Toronto Star site… 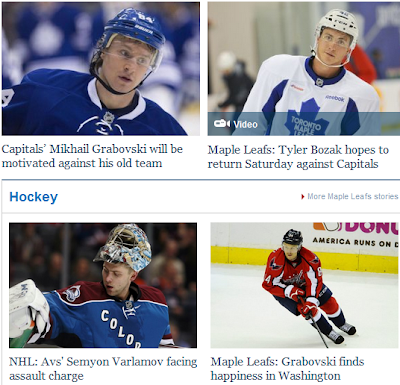 Well, maybe it’s just a Grabovski thing.  No hard feelings and all.

As for the Leafs, they come into this game in something of a holding pattern as far as wins and losses go.  Toronto is 3-4-1 in November, all of their wins coming on home ice (3-1-0 overall at home this month).  Those four games are interesting for their variety.  They had everything a Leafs fan might want.

Want a tight checking game?  There was the 2-1 trick shot win over New Jersey.  Want a laugher?  There was the three-goal eruption against the Islanders in the third period for a 5-2 win.  Want a wake-up call?  There was the 3-0 lead the Leafs took into the third period against Buffalo before almost blowing it, finally getting a late goal for a 4-2 win.  And, it you want to have something to complain about (because really, that’s what we sports fans do best), there was the 4-2 loss to Nashville on Thursday.

In those four home games the Leafs managed a dozen goals, three of them by Phil Kessel, almost doubling his home goal total from four to seven (tied for eighth in the league in home goals).  Mason Raymond (2-2-4) and Trevor Smith (1-3-4) lead Toronto in home points in four November home games.

At the other end, Jonathan Bernier got the call in three of the four home games for Toronto this month, and he has delivered for the most part.  He is 2-1-0 in those three appearances, with 93 saves on an even 100 shots faced.  He does have, however, those four goals on 28 shots against Nashville in his last appearance at Air Canada Centre.  James Reimer has but one appearance this month on home ice, a 33-save effort in a 4-2 win over Buffalo.

Here is how the teams break down, numbers-wise… 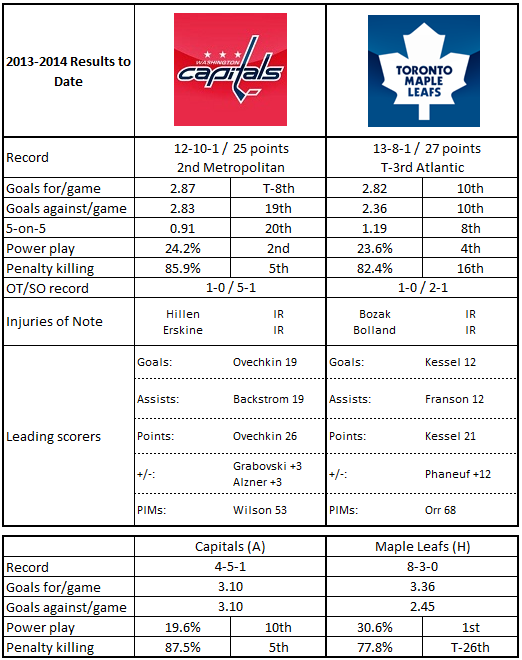 2.  So… about that PDO thing.  Toronto is fourth in PDO in 5-on-5 close situations.  Bad possession numbers, big PDO.  How long is that going to last?

3.  Maybe it’s a time thing.  Toronto doesn’t spend much time in 5-on-5 close situations.  Only seven teams have spent less time in that situation than the Leafs through Thursday’s games.

4.  One thing that might be an underrated part of Toronto’s success so far – five of the seven defensemen to have dressed this season have done so for every game.  Compare that to the forwards, only two of whom have dressed for all 22 games and which have seen 21 different players take the ice in those 22 games.

1.  Alex Ovechkin leads the league in power play goals (eight).  He is second in the league in even-strength goals (11).  He has one even strength assist for the season.  For the record, it came on October 24th in the third period against Edmonton in a 4-1 win.  He recorded the secondary assist on a goal by Nicklas Backstrom.

3.  From the “if I told you, would you believe” file, that Jason Chimera has more even-strength assists (eight) than Nicklas Backstrom (seven)?  Backstrom is still sixth in the league in assists per game overall (0.83), nestled right between Evgeni Malkin (0.87) and Sidney Crosby (0.78).

4.  Joel Ward leads the league in shooting percentage (25.0 percent).  Part of it is that Ward is tied for 244th in shots on goal per game.  Small sample, irregular results.

5.  The Caps have an unremarkable scoring defense (2.83 goals per game, 19th in the league), but they have only one player in the top-50 for most goals scored against, on ice.  John Carlson is tied for having the 39th most goals scored against while on ice (25).  You would think the Caps would have a lot of players ranking high in the list of players on ice for goals against.  They do have six, but there are six teams with more such players, including the Chicago Blackhawks (seven).

When he was drafted second overall by the Philadelphia Flyers in 2007, folks though James van Riemsdyk was the next Flyer power forward in waiting.  In three seasons in south Philadelphia, though, he never seemed to have a breakthrough.  He gave glimpses and teased along the way, but never seemed to put it all together with the Flyers.  After the 2011-2012 season Philadelphia must have thought it was not it was not going to come together and traded van Riemsdyk to Toronto for defenseman Luke Schenn.  It seems to have awakened that power forward that was lurking inside van Riemsdyk.  In 68 games with Toronto he has 27 goals, almost as many as he had in his final two seasons in Philadelphia (32 in 118 games).  He has hit a bit of a dry spell lately with only two goals – both in a 4-2 win over Buffalo – in his last eight games. He is 4-4-8, plus-2, in 12 career games against the Caps.

Capital defensemen have taken 217 shots on goal this season and have seven goals to show for it.  That is a 3.2 percent shooting percentage.  Take John Carlson and his five goals on 57 shots (8.8 percent) out of the mix, and it is 2-for-160 – 1.25 percent.  The biggest contributor to that lack of shooting efficiency is Mike Green, who has yet to light the lamp on 52 shots on goal.  That is the most shots on goal without success in the league.  Next in line is Minnesota’s Ryan Suter, who is 0-for-44.  Green is not lacking for opportunities taken; he is 11th among defensemen in shots on goal, despite having missed three games.  If the Caps are going to have any consistency in their results, Green is going to have to breakthrough.

1.  Short memory.  The Caps cannot afford to dwell on a home stand that started well (win over St. Louis) and ended poorly (two losses).  Having a game on the night following a loss should help, but the trick is stopping bad streaks before they become streaks in the first place, and that means getting off to faster starts (or at least keeping opponents from doing the same) in the opening 20 minutes.

3.  Grab the ring.  When Mikhail Grabovski records a point, the Caps are 8-5-0.  When he does not, they are 4-5-1.  This is the importance of secondary scoring.  Alex Ovechkin is going to get his, but the third, or second, or whatever line you want to call it – Grabovski, Jason Chimera, and Joel Ward – need to do what they’ve been doing.  Grabovski will have incentive, and he will be the object of attention, given his history in Toronto. He and his running mates had a quiet night against Montreal last night – one point (an assist by Grabovski), three shots on goal, five shot attempts.  If he – and they – can make more noise tonight, the Caps should be successful.

The Caps have had a difficult time getting good footing in advancing through their schedule.  Over their last 16 games they are 10-7-1, but how they got there is not especially comforting – three wins, two losses, four wins, two losses, three wins, two losses.  The good news is that the Caps have not lost three in a row since dropping games to Dallas, Carolina, and Colorado over the week of October 5-12.  If the Caps lose in regulation, and New Jersey wins in San Jose later in the evening, the Caps would fall out of second place in the Metropolitan Division after they occupied the top spot following their win over St. Louis to open the week.  Let’s not let that happen…