Last week, we opened with this…

"When wounded, stop the bleeding.  The Washington Capitals did just that in Week 15.  It was not the prettiest, nor was it the most dominating of weeks, but wins are wins.  All of them are worth two points.  And the Caps took all the points available to them in Week 15."

This week, the Caps did not fare so well.  It was, arguably, their worst week of the season, perhaps their worst since Week 2.  And with it, there were consequences in the standings. 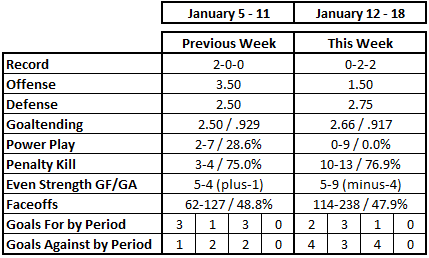 It was the Caps’ second 0-2-2 week in their last three, their second four game losing streak in the space of ten games.  The consequences of the winless week were that the Caps dropped from second place in the Metropolitan Division to fifth, just one point ahead of sixth-place New Jersey, three ahead of the Carolina Hurricanes in seventh, and six ahead of the last-place New York Islanders.  It left the Caps on the outside looking in at playoff eligibility.  In fact, the week left the Caps lower in the Eastern Conference standings than any time since Hallowe’en, when the Caps were 5-7-0 and tied for ninth in points but in 12th in the standings with tie-breakers. 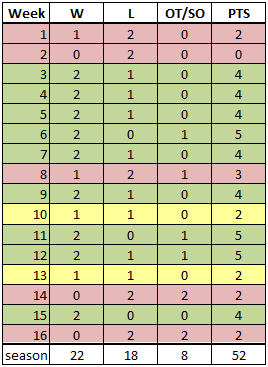 Four games, three one-goal efforts on offense.  The “multi-vitamin” offense (“One-a-Day”) finished the week with five one-goal games in their last ten, 12 games of one or no goals in 48 games this season.  With only six goals scored for the week, there was not much to go around.  Alex Ovechkin and Jason Chimera each had a pair of goals, Brooks Laich and John Carlson the others.  Six goals on 120 shots (5.0 percent) was an especially weak performance, efficiency-wise.

Once again there was churning in the forward lines. The week started like this:

…although even this was a loose structure in the waning minutes of the week-ending game against Columbus.

The most disappointing part of the week might have been letting three leads get away against Pittsburgh in a 4-3 loss to the Penguins.  Twice those leads were lost in three minutes or less after a Capitals goal.  Both of those times a weakness was exploited.  The defensive pairs in those instances were Connor Carrick and John Erskine, and Carrick and Dmitry Orlov.  The Penguins, a deep offensive team, could take advantage of a lack of depth on the Washington blue line.  That it was two support players scoring the goals – Taylor Pyatt and Jussi Jokinen – made the problem appear more stark.

The goals and shots against increased in tandem over the week.  In the first two games of Week 16 the Caps held opponents to 31 and 29 shots, respectively.  Coincidentally, Buffalo and San Jose each managed only a single goal in 65 minutes.  In the third and fourth games of the week, Pittsburgh and Columbus recorded 37 and 36 shots on goal, respectively.  Those totals were accompanied by four goals for the Penguins, five for the Blue Jackets.

As possession goes, it was not a bad week for Washington.  In the first three games of the week the Caps were over 50 percent in both Corsi-for and Fenwick-for in 5-on-5 close score situations.  It extended to nine the streak of games the Caps had with their Corsi-for percentage over 50 percent.  It came tumbling down in the last game of the week, the Capitals managing only a 43.8 percent Corsi-for and 44.8 percent Fenwick in 5-on-5 close score situations.

It was another “three goalie week.”  Hey, if you have ‘em, use ‘em.  Philipp Grubauer once more got the lion’s share of the work with three starts and 151 minutes for the week.  Not that it ended well, although it was hardly his problem.  In those 151 minutes he had a goals against average of 1.98 and a save percentage of .932.  For that, Grubauer ended up charged with three losses (0-1-2).  Tough luck, kid.

Michal Neuvirth got the other start and was respectable in a 4-3 loss to Pittsburgh.  He stopped 33 of 37 shots and deserved better in front of him.  A goal off a 4-on-2 rush, a goal off a player left alone from point-blank range in the slot, a goal-mouth tip-in, and a shot through a maze of bodies in front of him.  If he’d been sharper as the product of having more playing time over the past couple of months, perhaps one or two of those goals don’t happen, but things are unsettled with the Caps’ goaltending these days, and, to a degree, so was Neuvirth’s lone appearance.

That left the odd 37-38 minutes for the week.  Those belonged to Braden Holtby in his first appearance in almost two weeks and second in almost a month.  He stopped 20 of 22 shots (.909) in relief of Grubauer in the last game of the week, the 5-1 loss to Columbus.  As mop-up duties are concerned, it was an adequate performance, but perhaps more notably, it was the first time in five appearances in which Holtby finished an appearance with a save percentage over .900, dating back to a December 7 win over Nashville, Holtby’s last win on his record.

When a team depends on the power play as much as the Caps, and it dries up, bad things happen.  That was the case this week, the first time since Week 7 that the Caps took an oh-fer for the week.  Overall the Caps were 0-for-14 shooting in 15:59 of power play ice time.  Of those 14 power play shots on goal, Alex Ovechkin had eight of them, only Nicklas Backstrom and Marcus Johansson the other Capitals with more than one power play shot on goal (two apiece).  John Carlson was the only defenseman with a shot on goal.  Mike Green did not record a shot on goal in 8:46 of power play time for the week.

For the Caps, the 0-for-9 week extended their longest streak of frustration of the season with the man advantage.  They have not recorded a power play goal in five straight games (on 13 chances), the longest such streak in head coach Adam Oates’ tenure.

One gets the feeling that the Capitals penalty kill has found their norm, and it is not a pleasant thing to contemplate.  Week 16 was the eighth time in the last 11 weeks that the Caps had a sub-80 percent week.  Overall, the Caps allowed three goals on 21 power play shots in 21:20 of shorthanded ice time.  It might have been a much better week had the Caps not traveled to Columbus.  The Blue Jackets had two power play goals on eight shots in 6:18 of power play time in their 5-1 win.  If there was a plus, and we might be reaching here, the Caps did have consecutive games in the middle two games of the week against San Jose and Pittsburgh in which they did not allow a power play goal.  It was the first time the Caps blanked opponents on the power play in consecutive games in which they faced shorthanded situations since stopping Florida and Philadelphia on December 13-15.

When the power play draws a blank, and the penalty kill has an uneven week, the 5-on-5 game has to be there for there to be any success.  It was not, and the Caps had little success (two standings points being the take in four games).

The Caps allowed the first even strength goal in three of the four games and allowed the last even strength goal in the three games in which they allowed one.  It really was a tale of two weeks within the week.  The shot spread was rather tight, ranging from 25-29 shots against at even strength in the four games.  In the first two, the Caps held opponents to no goals on 25 shots (Buffalo) and one goal on 27 shots (San Jose).  In the last half of the week, it was four goals on 29 shots (Pittsburgh) and three on 28 shots (Columbus).

When a team loses all four games for the week, it is not likely they do much by way of winning periods.  The Caps didn’t, only breaking even in the second period, scoring and allowing three goals overall.  Of the 12 regulation time periods for the week, the Caps won two of them, the second period of their contest against San Jose (one goal to none), and the first period against Pittsburgh (again, one goal to none).  The Caps lost five periods and tied in five others.  Even in the period they won, they could not build momentum.  In neither case would the Caps score the next goal.

It is hard to find any gold dust amid the sludge that was Week 16.  And the problem is growing.  Two 0-2-2 weeks in the last three, a 3-5-5 record over their last 13 games.  The things that the Caps have depended on to win games this season – power plays and shootouts – failed them.  Two Gimmick losses, drawing a blank on the power play for the week.  Both are part of longer trends, the five-game streak without a power play goal and four straight losses in the freestyle competition.

What we saw with this week is that the things the Caps depend on for wins this season are fickle.  The meat of a successful team – possession and winning 5-on-5 battles – is lacking with this team.  The Caps are tied with the Islanders for last in the Metro Division in wins in regulation and overtime, only four teams in the league have fewer.  They did not add to that total (14) this week.  As a result, they have been caught and passed by several teams in the playoff race – Columbus and Philadelphia in the Metro being the immediate examples.

If things do not start improving, and soon, the Olympic break might be a time to start thinking about where to be spending early golf vacations instead of imagining playoff matchups.

Email ThisBlogThis!Share to TwitterShare to FacebookShare to Pinterest
Labels: 2013-2014 nhl season, NHL, that was the week that was, the peerless prognosticator, Washington Capitals