The Peerless Prognosticator is ON THE AIR!!! -- Game 57: Islanders at Capitals, February 4th

It is one down and three to go on this last pre-Olympic break home stand for the Washington Capitals.  Having defeated the Detroit Red Wings in the first of the four games, it is the New York Islanders next on tap for the Caps.

The Islanders arrive in Washington a team in a nosedive, losers of five straight games.  It has not mattered where or in what elements they came up short.  The first three of those losses came at home in Nassau Veterans Memorial Coliseum, then they took it outside at Yankee Stadium where they lost to the New York Rangers.  The fifth straight loss came last Friday against those same Rangers at Madison Square Garden, leaving the Islanders cemented in eighth place in the Metropolitan Division, nine points behind the three teams immediately ahead of them, including the Caps.

Over the five-game losing streak, Kyle Okposo has done more than his share trying to keep the Islanders competitive.  Four goals in five games brings Okposo into a tie with his career high in goals, 24 in 79 games in 2011-2012.  He comes into this game with on quite a run, having gone 25 games having avoided consecutive games without a point.  He is 16-16-32 over those 25 games with points in 20 of them.  In 17 career games against Washington, Okposo is 7-6-13.

Michael Grabner is next in line in scoring during the Islanders’ five-game losing streak (2-2-4), but like much of his season it has come in fits and starts.  He has a pair of two-point games during he streak, two of five multi-point games he has this season.  On the other side, he has had a 24-game streak this season without a point.  Grabner is 2-2-4 in 13 career games against the Caps.

The Islanders have split their goaltending responsibilities roughly evenly between Evgeni Nabokov and Kevin Poulin, neither of them putting up particularly good numbers.  Poulin is 11-16-1, 3.29, .891 in his 28 appearances, while Nabokov is 9-10-5, 2.83, .907 in his 27 appearances.  It would seem likely that Nabokov get this start.  Despite missing 10 games to a lower body injury in January and losing his last two decisions, he has a fine career record against the Caps – 12-2-3, 2.32, .919, with two shutouts. 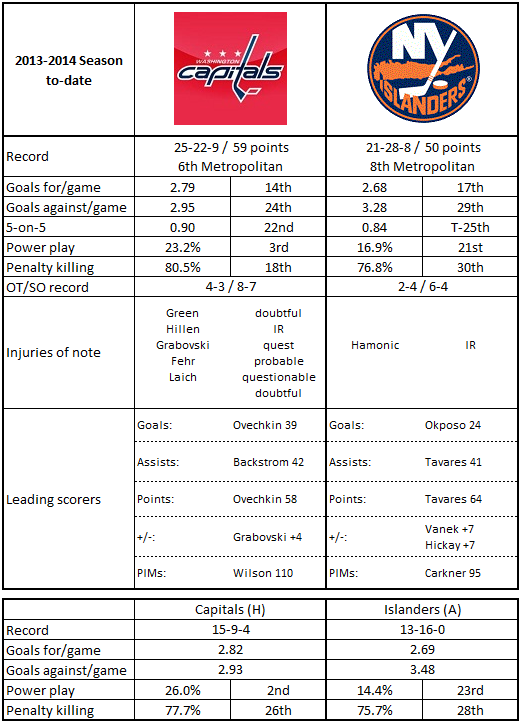 2.  Only four teams have scored fewer first period goals than the Islanders (36), and they have scored first only 23 times in 57 games.  It is not a team that usually gets off to fast starts.

3.  Only two teams have worse records in one-goal games this season than the 11-11-8 mark posted by the Islanders.  Couple that with the fact that only four teams have more losses by three or more goals, and you have a recipe for being a team sitting in 26th place in standings points.

5.  After a short string of games in which the Islanders were evincing better possession numbers (50-plus percent in Crosri-for percentage in 5-on-5 close score situations), they have sunk to their previous season-long level.  They have been at or below 50 percent in both Corsi-for and Fenwick-for percentage in each of their last four games, all losses.

1.  Washington has not won consecutive games on a home stand since winning three straight back on November 2-7 against Florida, the Islanders, and Minnesota.  They have an opportunity to break that string tonight.

3.  The Caps still have not won a game this season when scoring fewer than three goals.  They are 0-18-5 in such games.  Fittingly, since this indicates that the Caps are not stealing games with superior goaltending on nights their offense is off, all five extra time losses have come in the freestyle competition.

4.  Is it improvement?  Or, have other teams become leakier?  The Caps spent a long time challenging the Toronto Maple Leafs to see which team could allow more shots on goal this season.  The Caps have risen, if that is the right word, to 27th in shots allowed per game (33.5).  Ottawa and Buffalo have sunk beneath the Caps.

5.  The Caps are now in the middle third of the league in close-score possession statistics.  Don’t let out a roar just yet.  They stand 20th in both Corsi-for and Fenwick-for percentages.  But, progress is progress.  However, they have been below 50 percent in both measures in each of their last three games.

He is the straw that stirs the drink on Long Island, although it might be chocolate syrup in a glass of milk.  Tavares is not the flashiest player around, but there he is, 14th in goals scored, fifth in assists, tied for second in points behind Sidney Crosby (oh, and he’s a minus-4 for you hockey media who put stock in such numbers).  When he is on, the Islanders do well.  Tavares averages 1.7 points in Islander wins this season.  However, he hardly slacks off much when other things are not going well for the Isles; he still averages 0.83 points per game in losses.  He has been a remarkably consistent scorer this season.  Only twice over his first 53 games did he have consecutive games without a point.  However, he comes into this game without a point in his last three contests, all New York losses.

Here are some numbers for you… 53, 64, 85.  Martin Erat has gone without a goal in 53 consecutive regular season games, has one in his last 64 games, and has two in his last 85 regular season games. That’s not a drought, that’s the Sahara Desert.  It is nice that Erat, given his playing time and linemates this season, has 21 assists (tied for fourth on the team), but at some point he is going to have to display some offense of his own, especially with Mikhail Grabovski, Mike Green, and Brooks Laich all injured to varying degrees.

1.  Pressure.  Caps fans saw up close what a hard forecheck could do when the Caps applied it to a decent skating and possession team like Detroit on Sunday.  The Islanders are not at that level in either attribute.  Keep them below their own faceoff dots and let the turnovers happen.

2.  120 seconds.  Uh, guys?  It really is something to address, this whole allowing goals within two minutes of scoring one.  24 times, and counting.  Stop it.

3.  PK, OK!  The Islanders’ power play has short circuited over their five-game losing streak.  The Caps’ penalty killing stumbled against Detroit (1-for-3) after going 16-for-17 over their previous four games.  Allowing the Isles to get up off the canvas on their power play is a recipe for despair in this game.

The Caps looked good for stretches, particularly early, in their overtime win over Detroit on Sunday.  They also looked like crap over stretches.  That kind of uneven 60 minutes has been a consistent feature of the Caps this season.  Part of it is due to lack of depth on defense.  Part of it is inconsistent or unfocused goaltending at the wrong time.  Part of it is bad shooting luck (or bad shooting skill, depending on your tolerance for luck).  Part of it (recently) is injuries.  Whatever.  If the Caps are going to make a go of this post-Olympic playoff sprint, they had better bank points against teams like the one they face tonight.  There really is no excuse for losing.