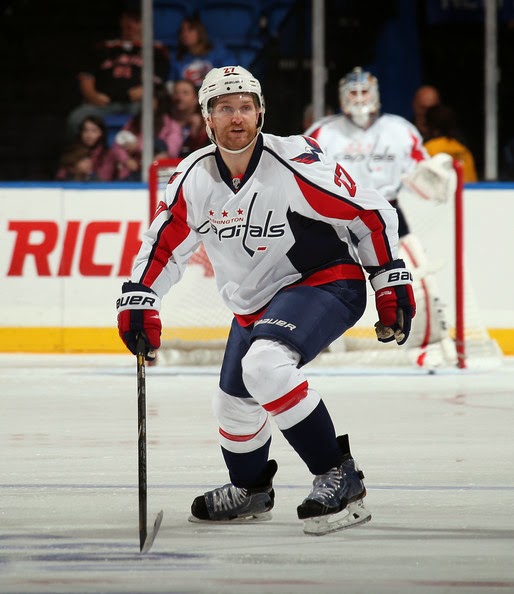 In his first two full seasons with the Washington Capitals, Karl Alzner toiled at developing a reputation as a smart, reliable defenseman who used angles and position more than force and brawn to defend his end of the ice.  In 164 games over the 2011-2012 and the 2012-2013 seasons that approach allowed him to post a scoring line of 3-26-29, plus-26.  The 29 points was not what was noteworthy, it was the plus-26.  Even with top-pair responsibilities (generally with John Carlson), Alzner had more good things happen than bad on the ice. 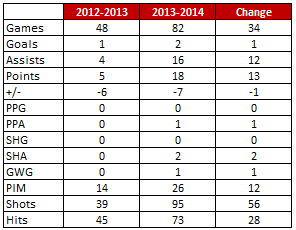 At this time last year Peerless noted that Alzner faced some rather offensive-minded forward opponents in his top 5-on-5 time on ice:

What Alzner gets is a lot of time against a lot of players with very good possession numbers generally.  In terms of average Corsi of opposing players at 5-on-5, Alzner faced the 27th best opposition among 173 defensemen playing in at least 50 games.    He faced the 17th highest opposition in average relative Corsi.

This is also a player who, as one might expect given the nature of the opposition he faced, got comparatively few offensive zone starts.  His 30.6 percent offensive zone starts is in the same neighborhood as defensemen such as Zdeno Chara (30.8 percent), Ryan McDonagh (30.8 percent), and Dan Girardi (30.5 percent).  Alzner remained, for this season and for better or worse, as close to a shutdown defenseman as the Capitals had.

How are those Corsi treating you these days? Alzner was 116th among 142 defensemen playing in 75 percent of their games in Corsi-for at 5-on-5.  His Fenwick was not any better (111th).  As it turned out, Alzner ended up 120th among those defensemen in goals for/against percentage.    And his goals-for percentage was not all that good relative to the teams’s goals for percentage at 5-on-5; Alzner was 105th among  defensemen in that one.

Odd Alzner Fact…  Above we compared Alzner’s 2010-2011and 2011-2012 seasons to his last two seasons, noting the change in plus-minus.  There is also the scoring line.  In the first two of those seasons Alzner averaged 0.1768 points per game.  In the last two seasons he averaged 0.1769 points per game.  Taking his points per game out to a fourth decimal place is a rather amazing piece of consistency, despite having played for three coaches in that span (Bruce Boudreau, Dale Hunter, and Adam Oates).

Game to Remember… March 8th versus Phoenix.  When the Capitals returned home on March 8th from a two-game road trip to Philadelphia and Boston, they were in the midst of a three-game losing streak and were three points behind Detroit for the last playoff spot in the Eastern Conference.  Awaiting them were the Phoenix Coyotes, who had consecutive wins over Vancouver and Montreal before traveling to DC.  The Coyotes got out to a 2-0 lead over the Caps with goals in each of the first two periods.  As the game moved through the third period it looked as if the Caps would extend their losing streak.  As we described it at the time…

From the 3:20 mark of the second period to the 9:15 mark of the third period, Phoenix out-shot the Caps, 19-14.  Then, something strange and wonderful happened.

It was innocent enough.  Jay Beagle and Keith Yandle were fighting for a loose puck in the left wing corner to goalie Mike Smith’s right.  As they were dueling, Eric Fehr swooped in and gathered up the puck, sliding it out to Alzner at the left point.  With Mike Ribeiro in the shooting lane, Alzner stepped to his left and down the wall to get an opening, then flipped a soft shot toward the goal (kids, take note...a right-handed defenseman on that side cannot make that play; sometimes the "handed" thing works).  As Alzner was snapping his shot at the net, Jay Beagle backed across Smith’s line of sight dragging Yandle with him on the coverage, and the commotion might have provided a distraction.  It was enough to allow the puck to sail untouched into the back of the net, and the Caps were within a goal.

That goal, on Alzner’s only shot on goal for the game, was the catalyst for a three-goal burst over a five-minute span that brought the Caps all the way back for what would be a 3-2 win that would stop the bleeding of the three-game losing streak.

Game to Forget… December 17th versus Philadelphia.  There were the Capitals, hanging on to a 2-1 lead mid-way through the second period of their mid-December game in Philadelphia against the Flyers.  Then the Flyers caught a break.  Nicklas Grossman started it with a wrist shot from the top of the offensive zone.  It was knocked down by what looked like a high-stick from Brayden Schenn, the puck dropping to the feet of Steve Downie. With Alzner trying to tie Downie up, Downie turned and tried to throw the puck at the net.  The puck caromed off the skate of Alzner onto the stick of Matt Read, who had a lay-up as a result, tying the game at 2-2.  Then after the Flyers took a lead late in the period on a Mark Streit power play goal following a major penalty to Tom Wilson for charging, they were on the attack moments later.  Kimmo Timonen walked the offensive blue line looking for a shooting lane but spied Jakub Voracek in the right wing circle instead.  Timonen slid the puck to Voracek, and before Alzner could step out and challenge, Voracek wristed the puck past goalie Breaden Holtby’s left pad to give the Flyers a 4-2 lead in a game they would win, 5-2.  It was Alzner’s only minus-3 performance of the season.

Alzner is a pretty good barometer of the Capitals’ situation.  He generally speaks his mind for public consumption in an earnest sort of way, and his comments at the end of the season were illuminating…

"We play good some games, and play tough against the good teams, but the teams that are lower in the standings we take our foot off the gas.  It's almost like we have the swagger sometimes that we're the best team in the League and we can just not play our best. I think it's a mental attitude adjustment that we need to fix.

"We're supposed to be a high-flying offensive team and we haven't really done that.  Our power play has been the only real bright spot this year. But 5-on-5 we just need to be better. I mean, we have to be one of the worst 5-on-5 teams in the League in goals-for vs. goals-against. We've got to be up there.

"It's insane, really just insane.  We don't have the identity. What we're supposed to be, we are not being. That's something that needs to change. I personally am a huge fan of the tight-checking, grind-it-out, 2-1 and 1-0 games, but that's not the way this team is built. If we're not built that way we have to be better for how we're built."

That is a pretty good summary of what ails the Caps, but he did not spare himself, either…

It was not an especially good year for Alzner or the Caps, and for a defenseman who was developing steadily as a shutdown defenseman, it was a disappointing outcome.  He, like his teammates, has some things to work on and think about before taking the ice next season.