We return with our weekly feature, “That Was The Week That Was,” a look back at the Washington Capitals over the past seven days.  Week 1 was a new start for the Caps – a couple of rookies standing out and an old coach turned “rookie” getting his first win as the Capitals’ bench boss. 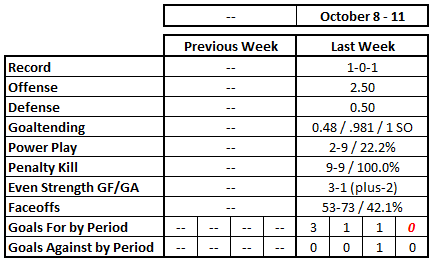 The Capitals got no break from the schedule makers to start the 2014-2015 season.  Their first four games are against the Montreal Canadiens, the Boston Bruins, the San Jose Sharks, and the New Jersey Devils.  The first three of those teams on the schedule reached the post season in 2013-2014 and had a combined regular season record of 151-69-26.  The Devils are thought to be much improved and have scored 11 goals in their first two games.

The Caps navigated their first two games of that stretch in decent fashion, the inability to hold a lead in the third period against the Canadiens in a 2-1 Gimmick loss being the blemish on the week.  From a distance, though, getting three points against two of the Atlantic Division powerhouses can be thought of as a good week.  The win over the Bruins was especially satisfying, give the respective prognostications for the two clubs, but was not entirely unexpected.  The 4-0 win over the Bruins made the Caps 6-3-0 in their last nine visits to Boston and 5-1-0 in their last six decisions against the Bruins overall.

The Caps started well against the Canadiens, recording seven shots on goal in the first 6:43, the last of them being Andre Burakovsky’s first NHL goal.  The Caps continued peppering goalie Carey Price (oops...Dustin Tokasrski... thank you, readers), putting 11 shots on net in the first 9:47.  That would be it for the Caps, though, their energy to start the home opener perhaps have dissipated.  Over the last 50:13 of regulation time and five minutes of overtime the Caps recorded only 19 shots on goal, none of them finding the back of the net.

Against Boston the Caps were more effective on the scoreboard, but the fickle finger of fate was particularly fickle with respect to the outputs.  Washington managed only 21 shots on goal against the Bruins, only 15 of them at even strength.  Part of that might be score effect – the Caps had only three even strength shots in the third period of a game they led, 3-0, after 40 minutes.

Although the week was not particularly explosive on the offensive side, it was balanced.  Four players shared in the five goals (Alex Ovechkin getting two against Boston), nine players shared in a total of 14 points.  Andre Burakovsky led the week in the latter with three points on his first NHL goal and a pair of assists.

Two games is about as small a sample size as you get, but giving up a total of 53 shots on goal for the week (26.5/game, ninth fewest) against a couple of talented teams has to be considered a good thing. And, the Caps avoided the bane of their existence on defense last season – allowing a goal within two minutes of scoring one of their own.  On the other hand, allowing 58 shot attempts to the Bruins in the second game of the week while getting only 38 of their own had the sense of playing with fire.

The defensive pairs are a concern in that they are all new.  Jack Hillen/Mike Green (Green missed the opener against Montreal) and Nate Schmidt, Karl Alzner and Matt Niskanen, John Carlson and Brooks Orpik are in that getting-to-know-you period, and at times it showed.  That third pair – Carlson and Orpik – was especially noteworthy and not in the best way.  All six defensemen had positive Corsi plus-minus at 5-on-5 against Montreal, but the picture looked very different against Boston.  The Carlson/Orpik pair was steamrolled at even strength as far as the possession numbers were concerned.  Both had double-digit minus numbers in both Corsi and Fenwick plus-minus.

Braden Holtby served early notice that goaltending will not be a weakness for the Caps.  Unencumbered by a coaching philosophy that was contrary to his nature, as was employed for large parts of last season, Holtby shined coming out of the gate.  He was good against Montreal, better against Boston. His 29-save effort against the Bruins featured a number of top-notch saves, including big ones after two bad Caps turnovers that left Bruins with point-blank opportunities from the slot.

Even the one goal he allowed for the week – a third-period tally by Montreal’s Tomas Plekanec – was a shot through a maze of bodies that might have been deflected on its way through.  There were no soft spots in Holtby’s game in Week 1.  Well, except for that whole Gimmick thing.  Holtby allowed three goals in five rounds of the trick shot competition.  It was reminiscent of last season in which among 29 goalies facing at least 20 shots in the Gimmick, Holtby was 17th in save percentage (.679).

It was a case of the old reliables doing the damage.  Alex Ovechkin, who did not have a power play shot on goal against Montreal as the Caps went 0-for-5, had two shots on the man advantage against Boston, scoring on one of them.  Then there was Mike Green, who missed the opener against the Canadiens and who finds himself as the second option on the point on the power play depth chart (under John Carlson), potting a goal on his only shot in the Caps’ 4-0 win over Boston.

It was a tale of two games with respect to power play efficiency.  Washington managed only four shots on goal in 6:56 of power play time against Montreal, two of those shots coming from outside by defensemen (Matt Niskanen, John Carlson).  Against Boston, the Caps were sharper – six shots on goal in 4:43 of power play time, four of those shots coming from forwards, two of them by Ovechkin, who recorded one of the two power play goals against the Canadiens.  Mike Green got the other one when he was left alone on the weak side of the power play formation.  Evgeny Kuznetsov found him for the score, fellow rookie Andre Burakovsky getting the other assist.  It is a new day on the power play.

Last season, Montreal did not have an especially potent power play (17.2 percent, tied for 19th).  Boston had one, though (21.7 percent, third in the league).  Either way, 9-for-9 is a good week.  Being good meant being efficient.  The Caps allowed the Canadiens only six shots on goal on five power plays in 6:56 of power play time.  Against Boston those numbers were five shots on four power plays in eight minutes of power play time.  Of the 11 shots Holtby faced on the opponent’s power play for the week seven of them came from defensemen.  Neither Montreal nor Boston was able to get much in the way of close-in opportunities, at least in terms of being able to get shots on goal from that area of the zone.

This is where the Carlson/Orpik pair performed much better.  In 14:56 of total opposition ice time on the power play for the week, John Carlson logged 10:00, Orpik logged 8:27, by far the most shorthanded ice time of any Caps defensemen.   On the other hand, all seven defensemen who saw action this week got some penalty killing work, even if Nate Schmidt (0:36) and Mike Green (0:24) got only a taste of it (every other defenseman recorded at least one minute of shorthanded ice time).

If one thing contributed to the Caps’ misfortune more than any other from a performance standpoint last season it was their ratio of goals scored to goals allowed at 5-on-5.  Their 0.90:1 ratio ranked 23rd in the league, their 155 goals allowed at 5-on-5 ranked tied for 19th.  Starting off with a 3-1 margin in Week 1 is getting off on the right foot.  And, small samples notwithstanding, the Caps got an even strength goal from each of the top three forward lines: Alex Ovechkin, Andre Burakovsky, and Joel Ward getting them for the first, second, and third lines, respectively.

Faceoffs were a case of getting off on the wrong foot.  Whether one things faceoffs are important or not, ranking 30th in the league in anything is not a good thing.  And, it was not a case of being particularly poor in any one zone.  If anything, the Caps were worse in the offensive zone (40.8 percent) and defensive zone (40.5 percent) than they were in the neutral zone (45.7 percent).

Nicklas Backstrom took the largest share of draws and was respectable overall (50.0 percent on 40 faceoffs), and Troy Brouwer won seven of 11 draws.  After that it gets bad very quickly.  The rooies Kuznetsov (6-for-13) and Burakovsky (4-for-19) had it rough.  So, too, did Brooks Laich (8-for-25).  Hopefully, that’s just rust.

Two games, goals scored in every period overall, three first period goals.  That’s the good part.  That third period goal allowed against Montreal is the smudge on the shine in this area for the week.  What the Caps avoided, to their credit, was the soul-crushing goal in the last two minutes of a period.  They scored two of those of their own – an Alex Ovechkin goal with 1:21 left in the first period of the 4-0 win over Boston and a goal by Joel Ward with 1:14 left in that contest, although by that time the game was all but wrapped up.

All in all, not a bad week.  Two games against quality opponents, three of four points earned.  When one considers that the Caps were starting a true rookie in his first NHL action as center on the second line (and having him score a goal to boot) and missing top defenseman Mike Green for the opener, the week looked even better.  Individually, players who have to perform – Alex Ovechkin (two goals), Nicklas Backstrom (two assists), and Braden Holtby (one goal on 53 shots faced) – did just that.  Throw in the contributions of Burakovsky (three points) and Kuznetsov (one assist, and might have had another until the last goal in the Bruins game was changed from John Carlson to Joel Ward), and it was a good start to the season.