Week 2 for the Washington Capitals looked a lot like Week 1 – extra time, trick shot competitions, and… Corsi!  It made for a good week overall. 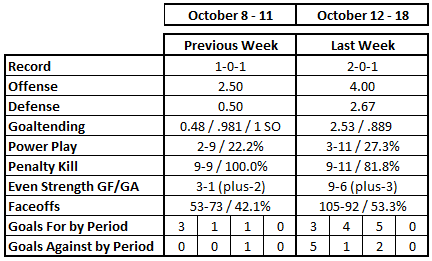 The best that can be said about Week 2 was that it was a solid effort – a come-from-behind charge from twice being down three goals to earn a standings point against the San Jose Sharks, a dominating 6-2 win over previously undefeated the New Jersey Devils, and a gritty 2-1 Gimmick win over the Florida Panthers.  On the other hand, there were the two trick shot competitions.  Not earning regulation/overtime wins is a spillover from last season when the Caps had the fourth lowest percentage of wins coming in regulation time or overtime (73.7).  The Caps have one (oops..make that two) ROW among their three wins to date, but then again, they have not lost a game in regulation time, either, the only team in the East not to have done so over the first two weeks of the season.

Nine different players shared in the 12 goals scored for the week, Alex Ovechkin leading the team with three.  The story, though, might have been Marcus Johansson.  He was the other Caps with a multi-goal week, notching two in the three games of Week 2.  The work project for Johansson to begin this season was to shoot more.  He has done just that.  The six shots he recorded for the week made it 11 in five games.  Last season he did not record his 11th shot on goal for the season until his 12th game.

Sixteen players shared in the point scoring for the week, led by the “middle aged” guns.  Alex Ovechkin (3-1-4), Mike Green (1-3-4), and Nicklas Backstrom (1-2-3) led the way, along with Troy Brouwer (1-2-3).  Backstrom went into the last game of the week needing one point in what was his 500th career game to reach the 500-point plateau.  He came up short, but he has (one hopes) many years ahead of him to build a career point-a-game resume.

The low shot volumes against was a reflection of very good overall possession numbers for the week.  The Caps had a 54.30 percent Corsi-for percentage at 5-on-5 for the week (numbers from war-on-ice.com).

It was not a particularly efficient week in net for the Caps (.889 save percentage).  The problem was the first period.  In three games Braden Holtby and Justin Peters were a combined 23-for-28 in saves in the opening frame (.821).  After that they were fine (41-for-44; .932 save percentage), but that was a matter of damage control.  The silver lining there is that while Holtby and Peters went a combined 17-for-22 on saves in the first period in the first two games of the week (.773 save percentage), Peters stopped all six shots he faced against Florida to end the week.

It was a good week that would have been even better, perhaps, but for lack of opportunity.  That would mean the Florida game to end the week.  The Caps had only two power plays against the Panthers, one of them lasting all of seven seconds.  Thus, it is not surprising that Washington took an oh-fer on the man advantage in that game and did not register a shot on goal.

In the first two games of the week the Capitals dominated on their man advantage.  A 3-for-9 record (33.3 percent) was the result of pounding San Jose and New Jersey with 17 shots in 13:51 of total power play time.  Alex Ovechkin had eight of those 17 shots, so neither the Sharks nor the Devils were taking away his personal space.  What the Caps got, though, was support.  Marcus Johansson scored on his only power play shot of the week; Andre Burakovsky was 1-for2.

The penalty killers had a bit of a confounding week.  On the one hand, 9-for-11 is not an especially impressive mark.  Then again, allowing two goals on only 13 shots in 19:53 of shorthanded ice time is.  The two goals were scored from almost precisely the same spot at the same end of the ice in the same circumstances.  Against San Jose a Matt Nieto shot from the right point got through traffic, and goalie Braden Holtby made the initial save.  However, he could not cover the loose puck, and the Caps could not clear it.  Defenseman Matt Irwin pounced on the loose puck on the weak side to Holtby’s right and scored before anyone could defend him.  Against Florida it was Dylan Olson firing from above the right wing faceoff circle.  This time it was Justin Peters making the initial save but failing to cover the loose puck.  It made its way to the right of Peters where Brad Boyes pinched in on the weak side to bury it.

On both occasions a Caps defenseman – John Carlson against San Jose, Brooks Orpik against Florida – were occupied trying to keep an opponent at the top of the crease to the goalie’s left from getting a whack at the puck, leaving that weak side area down low open to a player pinching in.

Cold starts and hot finishes.  The Caps allowed five of the eight goals allowed in Week 2 in the first period of their three games.  They scored five of their own in the third period of those games.  It was in the second period that the week might have been defined, though.  Falling behind in the San Jose game by a 3-0 score in the first period and being held to a 2-2 tie by the Devils after 40 minutes in their contest in the middle game of the week, the Caps outscored the Sharks, 3-1, and the Devils, 1-0, in the second periods of those games.

It is hard to argue with results, and a 2-0-1 week is never going to be a bad thing.  There were bumps along the way – the first period against San Jose, the manner in which the power play goals were allowed among them – but the Caps are tied in standings points with the New York Islanders and Ottawa Senators for second place in the Eastern Conference, just two points behind the Montreal Canadiens with a game in hand.

It is a good start to the season for the Caps, quite an improvement on the 1-4-0 five-game start of last season that put the Caps squarely in a hole that they seemed to spend the rest of the season trying to climb out of.  It is just the thing they needed as they head west to take on Edmonton, Calgary, and Vancouver in Week 3.