The Peerless Prognosticator is ON THE AIR!!! -- Game 70: Predators at Capitals, March 18th

The Washington Capitals will wrap up their short two-game home stand on Friday night when the Nashville Predators come to town.  The Caps stopped a two-game winless streak from becoming three when they beat the Carolina Hurricanes, 2-1, in overtime on Tuesday night.  Nashville, which lost to Washington in Tennessee back on February 9th, 5-3, has been a very good team since, going 10-1-4 in 15 games since that meeting.

The Predators do come into this game without everything being unicorns and accordions, though.  Going into Thursday night’s game against the New York Islanders (their first at home after a five-game road trip), they are 1-1-1 over their last three contests and will be coming to Washington to play the second half of a back-to-back set of games.

Scoring has become a bit of a problem for the Predators in recent games, posting just seven goals in their last three – their swing through the three western Canada cities of Calgary, Vancouver, and Edmonton – after averaging almost 3.4 goals per game in 12 games after facing the Caps last month.  Neither of their top-two forwards in total points – Filip Forsberg and Mike Ribeiro – had a point in any of those last three games.

Despite the three-game slump, Forsberg is on roughly the points-producing pace (61) that he had last season (63).  This year, he is doing it with more emphasis on goal scoring.  He has 28 goals through 70 games this season, a career best after posting 26 goals in 82 games last year.  Part of that was a February that left third-degree burns on the rest of the league when he recorded 12 goals in 13 games for the month.  What he has not done lately, though, is score goals on the road.  Since he recorded a hat trick in Toronto against the Maple Leafs on February 23rd, he has one goal in his last six road contests.  And, in this three-game mini-slump, he has more penalty minutes (nine) than shots on goal (six).  In three career games against the team that drafted him, Forsberg is 3-2-5, plus-2.

When we penned our prognosto back on February 8th before the last meeting of these clubs, we said of Ribeiro…

It has not gotten any better.  Since then, Ribeiro has one goal in 16 games on 17 shots. In five of his last ten games he did not record a shot on goal and only once recorded more than one (three against Calgary on March 9th).  He does have 13 assists in the 16 games since facing the Caps, so he is managing to contribute in other areas in the offensive end of the ice.  And, it seems to matter.  When Ribeiro records at least one assist, the Predators are 22-6-4, while they are 13-16-9 when he does not.  Ribeiro is 2-9-11, plus-2, in 23 career games against the Caps.

Pekka Rinne spent the first half of the regular season playing goal in a very un-Rinne-esque fashion.  In his first 46 appearances he was 20-18-8, 2.57, .902, with two shutouts.  However, over his last 11 appearances he has been the Rinne who was a Vezina Trophy finalist in consecutive seasons at the start of this decade.  He is 8-1-2, 1.89, .939, with two shutouts over those 11 appearances.  The question will be whether he will get the call for both ends of the back-to-back set of games the Predators will play against the New York Islanders on Thursday night and against the Capitals on Friday.  It would not be surprising.  Rinne went into Thursday’s game tied for the league lead in appearances among goaltenders (57), games started (57), and he led outright in minutes played (3,422).  It might be worth noting that he did play in one set of back-to-back games this season, dropping both ends of the set – at Columbus (on November 20th) and at Minnesota (on November 21st) – allowing seven goals on 44 shots.  Nashville was shutout in both games by identical 4-0 scores.  In three career appearances against the Caps, Rinne is 2-1-0, 2.68, .911. 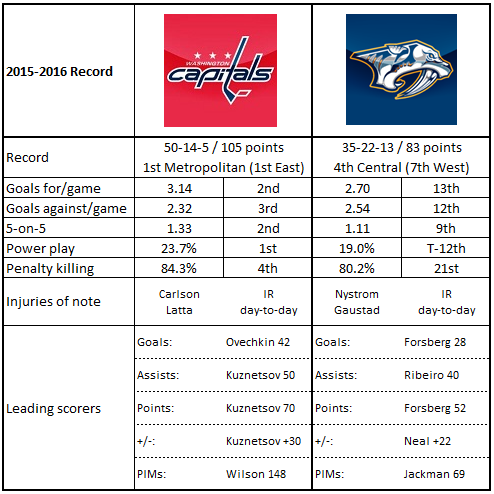 1.  Odd fact about Mike Ribeiro and his goal scoring.  In six of the seven games in which he recorded a goal this season, he also had an assist, 1-1-2 in each of those six games.

2.  Odd fact about Rinne and his shots faced.  In six games this season, all of which he started and finished, he faced fewer than 20 shots on goal.  He lost five of those games and had a save percentage of just .816 in those six games.

3.  Nashville is second in the league in fewest shots on goal allowed per game (27.3).  Only two teams have allowed 20 or fewer shots in a game more times than the eight times the Predators have done so (Carolina and Montreal, both with nine occasions).  Odd thing, the Preds are just 3-5-0 in those games.

4.  Only five teams have allowed fewer first period goals than Nashville (44), but no team has allowed more overtime goals than the Predators (12).

2.  Only one team this season has had fewer games with 20 or fewer shots on goal than the Capitals, who have two such games (and won both). Care to guess who?  We’ll wait…

3.  On the other hand, only three teams have fewer games with 40 or more shots on goal than the Caps, who have done it three times – Arizona, Calgary, and Tampa Bay with two apiece.  Oh, and the Caps won all three of their games, too.

5.  Washington has allowed the second highest number of shot attempts per 60 minutes on home ice (58.6).  Only Colorado has allowed more (61.3; numbers from war-on-ice.com).

In his five seasons in the NHL, Roman Josi is one of 12 defensemen to play in at least 300 games, record 40 or more goals, and post 120 or more assists.  The list reads like a who’s who of NHL defensemen with the likes of Drew Doughty, Erik Karlsson, Kiklas Kronwall, Mark Giordano, Kevin Shattenkirk, teammate Shea Weber, and Washington’s John Carlson on it.  He is on a pace this season to finish with 13 goals, which would challenge his career best (15) set last year in 81 games.  He seems quite likely to break his personal best in assists (40) set last year (he has 38 in 70 games) and points (55), also set last season (he is on a pace to finish with 57).  What he has not done lately from the blue line is score goals.  He has just one in his last 25 games and none in his last 16 contests.  Josi is 2-1-3, minus-2, in six career games against the Caps.

Having arrived from Toronto in the Brooks Laich deal at the trading deadline, Daniel Winnik has seven games under his belt with the Caps.  He has toiled in relative obscurity on the fourth line, not making a big impression in the top-end statistics – no goals, no assists, no points, even in six of his seven games (plus-1 in the other), averaging exactly one shot on goal per game, getting a shade over 13 minutes of ice time a night.  But in 91 minutes and change of ice time, Winnik has been on ice for only two goals against.  Being a fourth liner, he is not likely to see much in the way of productive offensive talent across the ice from himself.  But still, the goals that the other team does not get is a contribution, too, whatever his numbers in the offensive end.  If he is going to break through on the score sheet it might be against the Predators.  Winnik is 5-4-9, plus-2, in 25 career games against Nashville.

The Caps are getting to that point in the season where they are fine tuning the details of their game so that they can be productive and effective when the post season starts in less than four weeks.  This will be a good game as part of that process, facing a team that is solid in offense and defense, and with very good goaltending.  Nashville is certainly representative of the talent the Caps will face in the postseason, and it is getting time to demonstrate that they can flourish against such teams.