The Peerless Prognosticator is ON THE AIR!!! -- Game 13: Capitals at Blachawks, November 11th

After dropping the last game of their three-game home stand, the Washington Capitals go on the road for three games, starting on Friday night against the Chicago Blackhawks.  Washington, losers of a 3-0 decision to the San Jose Sharks on Tuesday night, saw a five-game winning streak come to an end.

On the other side, the Blackhawks go into the contest owners of a seven-game winning streak and points in nine straight contests (8-0-1).  Stingy has been the word to describe the Blackhawks in their recent run.  In their seven-game winning streak they allowed a total of only nine goals and have two shutouts, both of them authored by Corey Crawford.

Crawford got the call against the Blues on Wednesday, so if he gets a night off on Friday, the Caps could face Scott Darling.  He has been consistent in a backup role so far this season, but perhaps not in a way the Blackhawks would prefer.  He does have three wins in his three appearances, but he has allowed ten goals on 105 shots (.905 save percentage), and he has not allowed fewer than three goals in any appearance.  Darling lost his only appearance against the Caps, allowing four goals on 24 shots in a 4-1 loss to the Caps on October 15, 2015.

The Blackhawks have a total of 24 goals in their seven-game winning streak.  It is a balanced ledger, to a point.  Five players account for 21 of those 24 goals, only three goals recorded by the other 16 skaters to dress for those games.

Marian Hossa leads that group of five in goals scored, recording six in all.  Earlier this season, Hossa became the 44th player in NHL history to record 500 career goals, but he has been on a tear lately, with goals in five of his last seven games (he had a two-goal game in a 4-0 win over the Colorado Avalanche on November 3rd).  The odd part of that is Hossa only recorded at least one shot on goal in five of those seven games of the winning streak.  When he shoots, or at least gets pucks to the net, he scores.  Overall on the seven-game winning streak, Hossa’s six goals have come on a total of 16 shots, a 37.5 percent shooting percentage that has made him a very efficient shooter.  In 52 career games against the Caps, Hossa is 24-32-56, plus-18.

Artem Anisimov is something of an unexpected member of the group of five, having recorded four goals in the seven-game Blackhawk winning streak.  The four goals gives Anisimov eight for the season, tops on the club, and his seven even strength goals is tied for the league’s best.  The eight goals in 14 games is almost half way to his total in 77 games with the Blackhawks last season (20).  Bring a top-end goal scorer has not been a part of Anisimov’s resume over his seven previous full NHL seasons; he hit the 20-goal mark just twice, last season and in 2013-2014 with the Columbus Blue Jackets (22).  Anisimov is 3-6-9, minus-1, in 19 career games against Washington.

No one should be surprised that Jonathan Toews (four goals) and Patrick Kane (three) are in that group of five.  Since they came into the league together in the 2007-2009 season, they lead the franchise in goals scored, Kane with 256 and Toews with 255.  Toews, very much the two-way player, has just one “minus” game in his last ten games.  Kane, a talented all-around offensive player, comes into this game on a five-game points streak and has points in eight of his last nine and ten of his last 12 games.  Toews is 5-4-9, minus-1, in nine career games against Washington, while Kane is 3-4-7, minus-6, in 10 career games against Washington. 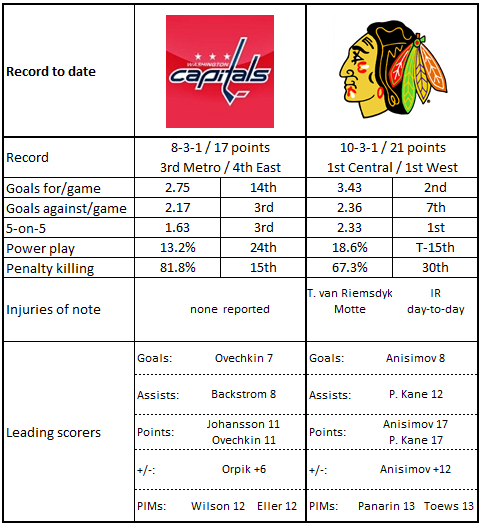 1.  Chicago’s penalty killing unit was brutal in the early going, allowing at least one power play goal in each of their first eight games and killing just 15 of 30 shorthanded situations (50.0 percent).  Since then, however, the Blackhawks have slammed the door shut, killing 18 of 19 opponent power plays (94.7 percent).

2.  On the other hand, the only weakness in the seven-game winning streak seems to be the Blackhawk power play.  In their last four games, Chicago is 1-for-17 (5.9 percent).  It has struggled at home of late, too.  After going 5-for-10 (50.0 percent) in their first three games at United Center this season, Chicago is just 3-for-25 in their last six games on home ice (12.0 percent).

3.  The odd inconsistency in power play success, plus the fact that the Blackhawks are on of ten teams having played in 14 games so far, leads their having spent more time on the power play than any team in the league (98:09), almost ten minutes more than the Winnipeg Jets (89:32).  More games played, more opportunities, an inconsistent ability to retire power plays by way of a goal scored.  But the Hawks do have the largest difference in power play to penalty killing time in the league (22:05).

4.  No team has scored more first period goals so far than the Blackhawks.  Chicago is tied with the Edmonton Oilers with 15 first period goals.  It goes with getting out to leads and success.  Chicago has scored first in ten of their 14 games to date, and their eight wins when doing so is second to the Montreal Canadiens (ten wins).

5.  The Blackhawks are an unexpectedly middle-of-the-road team in terms of possession.  Their 49.64 percent Corsi-for at 5-on-5 ranks just 16th in the league, and their 49.11 CF% at home ranks 21st (numbers from Corsica.hockey).

1.  The Caps have out-shot opponents 11 times in 12 games this season and have a record of 7-3-1 when doing so.  They have held opponents to 25 or fewer shots in six of 12 games with a record of 5-1-0.  Their only loss in those contests was the 3-0 shutout at the hands of the San Jose Sharks when the Caps held San Jose to 23 shots.

2.  The best penalty killing it the penalty you do not have to kill.  Washington has allowed opponents two or fewer power plays in four of their last five games and is 11-for-12 in killing penalties over those games (91.7 percent).

3.  The Caps are 6-1-1 when leading at the first intermission, the six wins being the most in the league.  They have scored first in nine of 12 games thus far.  Only Montreal and Chicago have done so more often (ten times apiece), and both have played more games than the Caps.

5.  The Caps continue to be a good possession team, ranking seventh overall in Corsi-for at 5-on-5 (52.76 percent).  They are even better, rankings-wise, on the road.  Their 52.84 percent Corsi-for at fives ranks fifth overall (numbers from Corsica.hockey).

Artemi Panarin is the fifth member of Chicago’s gang of five goal scorers in their seven-game winning streak, including the overtime game-winner against St. Louis on Wednesday night.  He is also the points leader over that span, having his name included in the scoring of ten of Chicago’s 24 goals scored.  It hardly looks as if Panarin is susceptible to the sophomore slump.  He is 6-9-15, plus-11 in 14 games, his goals, assists, and points on a pace to top the levels he reached in his Calder Trophy-winning rookie season last year (30-47-77).  Chicago has yet to lose a game in which he records a point (8-0-0) while going just 2-3-1 in games in which Panarin is held off the score sheet.  However, managing his time seems to be a factor, too.  Chicago is 10-1-0 in games in which he played 21 or fewer minutes, 0-2-1 in the three games he logged more than 21 minutes.  Panarin has an assist in two games against the Capitals in his brief career to date.

“One (Is the Loneliest Number)” is a song written by Harry Nilsson almost 40 years ago.  These days, it might describe the shots on goal profile of Evgeny Kuznetsov.  In his first five games this season, Kuznetsov recorded one goal on 12 shots.  Since then, though, Kuznetsov had a six-game streak in which he recorded just one shot on goal before that string was broken with a no-shot game against San Jose on Tuesday.  Kuznetsov does not have a goal since he scored his only one of the season against the Florida Panthers on October 20th (eight games), and he has not recorded a point in his last three games.  He does not have a power play point this season after recording five power play goals and 13 assists last season.  Then there is the faceoff performance.  In 12 games this season he is over 50 percent for a game just twice, and he is 104th of 107 players taking at least 100 draws so far in faceoff percentage (41.2 percent).  Kuznetsov is 1-3-4, even, in four career games against Chicago.

The Caps have cobbled together a good record through their first dozen games.  At 8-3-1, they are just one standings point off last year’s 9-3-0 mark though their first 12 games.  But dig deeper, and there is a muddled picture.  The Caps have gotten good goal scoring from Alex Ovechkin (seven) and T.J. Oshie (six), but the unexpected Marcus Johansson contribution (six goals) has masked the slow starts in this area of Evgeny Kuznetsov (one), Andre Burakovsky (two, none since Opening Night), and Justin Williams (one), all of whom recorded more than 15 goals last season.  One could say that Chicago has put together a long winning streak with a similarly unbalanced goal scoring profile, but if the Caps are going to be as successful going forward as they have to date, they are going to have to get some more production from these players.  And the Blackhawks, who are (with apologies to the defending Stanley Cup champions) are the current gold standard of opponent against which such contributions would be timely.