Sure, you recognize that lyric.  It’s in that song that gets played over and over in the film, “Groundhog Day.”  Over and over and over, relentlessly.  Like the disappointment Washington sports fans endure with the blossoms of the cherry trees or the falling leaves of autumn.  Every year.

The song played again late last night as the Washington Nationals lost Game 5 of their National League Divisional Series to the Chicago Cubs.  It was an outcome familiar to Washington Capitals fans over the years and now all too familiar to fans of the Nationals.  The game-ending scene had an eerie feeling of sameness to it.  For this Caps fan, watching Bryce Harper – the tying run at the plate – strike out to end the season looked all too much like Alex Ovechkin foiled on a breakaway early in Game 7 of the 2009 Eastern Conference semi-final that would have given the Caps an early lead, or T.J. Oshie having the puck bounce over his stick with a yawning net in front of him in Game 7 of last spring’s conference semi-final that would have given the Caps momentum, or Ovechkin in that same game firing a shot at what looked like an empty net, only to have the puck click of the shaft of the goalie’s stick and out of harm’s way.

Wins and losses in team sports are, by definition, a team effort, but there are moments of opportunity for an individual that occur with some regularity that can define a team as a winner or a disappointment.  It reminds me of a moment almost 35 years ago that enabled a team that had failed to win a championship since World War II to end a 39-year drought.  It was the sort of moment that lifted a single player from memorable to beloved.  Any Washington Redskins fan claiming to be one knows it.

Nursing a three-point lead in the fourth quarter of the 1982 Super Bowl, the Redskins were confronted with fourth down at the Miami Dolphins’ 43 yard line with one yard to earn a first down and a choice.  All three of the options they had were risky.  They could attempt a field goal, but 60 yards was outside the reliable range of kicker Mark Moseley.  They could punt, but a touchback would not only give the Dolphins the ball with ten minutes left on the clock, but would only net 23 yards of field position.  Or, they could go for it, although failing to gain the yard would give the Dolphins superb field position and lots of time left.

The Redskins went all in, choosing to go for the first down.  There was nothing fancy about the play they chose.  In team parlance, it was called “70-chip,” but it was basically a straight-forward, smash-mouth play set up to isolate the ball carrier on a single tackler to beat.  The ball carrier was John Riggins, and the poor soul the Redskins targeted with their blocking scheme was defensive back Don McNea.  The object was to gain one yard, Riggins size advantage and brutish running style creating enough momentum to gain that before engaging McNea.  But here was that moment, that instant of engagement that turned a well-designed and executed play into legend.  McNea met Riggins and desperately tried to wrap him up or grab onto something, anything on his uniform to bring him to the turf.  Riggins, having none of it, exploded through the tackle, casting off McNea as if he were a bit of lint picked off his sleeve and sprinted the 43 yards to the touchdown that clinched a Super Bowl win and ended decades of frustration for Washington Redskin fans.  The Redskins became winners, the reputation for which echoes to this day, despite their descent back into mediocrity over the last two decades. 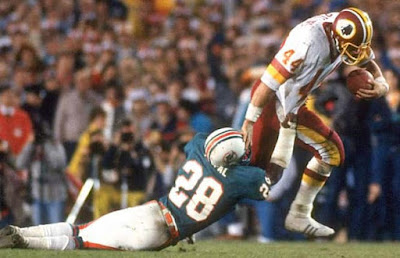 Other players in this town since have had that moment presented to them.  Alex Ovechkin has had such a moment.  Bryce Harper had his.  And their not taking those moments by the throat conjures up a depressing and infuriating thought as Washington heads into its 20th straight year without any team among its four major pro sports so much as reaching a conference final.  Year after year, the Caps and Nats are like Sisyphus, pushing that boulder up the hill over the course of a regular season, only to find that at the top – where championships are won – that boulder comes crashing back down the hill.  We are told that all those efforts do not matter, that those teams were different, that this time will be different.  Caps fans, you know the drill…

“Which history? I don’t know anything about the past. I’m looking forward here to the next game on Sunday.” – Nicklas Backstrom


“I don’t think this team has any playoff history. This is our first playoffs together, so, in my opinion, no. Sorry to be cheeky, but that’s the truth I think.” – Karl Alzner


“It doesn’t really matter. … Everybody talks about all the past, the past, the past. The only pressure that we’ll have is on ourselves. We’ve got to go into Philadelphia and we’ve got to play really well and get a win there. If we don’t accomplish that, then it will go to Game Seven. I thought tonight we played excellent.” – Head Coach Barry Trotz

“I've kind of said this all year: I don't believe [the team history of disappointment matters] in that because it's a different team every year.  You play different teams, different players, trades, free agents, whatever it may be. We didn't play the Cubs last year.  So who knows what would have happened if we did or didn't. Doesn't really matter. For me, I don't believe in it. Whoever plays better, whoever executes more, you're going to move on.” – Trea Turner


“Once you get out there, that stuff doesn't really matter, what we did last year; doesn't help or hurt us once we're in between the lines.” – Michael A. Taylor