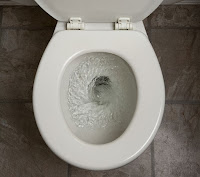 The Washington Capitals were buried under an orange wave on Saturday night as they dropped an 8-2 decision to the Philadelphia Flyers at Wells Fargo Center.  It was the first time the Caps surrendered eight goals to the Flyers and the first time in Philadelphia since they dropped an 8-1 decision to the Flyers on November 3, 2005.

The Flyers dominated possession to open the game, out-attempted the Caps overall by a 9-5 margin into the eighth minute.  They scored on their tenth shot attempt when Sean Couturier took a Jakub Voracek  feed as he was barreling to the Caps’ net.  Couturier split the Caps defense and got two whacks at the puck, the second one finding the back of the net at the 7:18 mark.

Jakub Vrana tied the game just over two minutes later when he helped dig out a loose puck along the left wing wall, then went to the net.  He got there just in time as Evgeny Kuznetsov was taking a feed from John Carlson, and as he was crossing in front, backhanded a pass to Vrana for a tap-in at the 9:25 mark.

It might have been a good thing had the Caps made it to the first intermission tied, but the Flyers upset that thinking on an odd play late in the period.  With the Caps on a power play, Scott Laughton blocked an attempted pass by John Carlson just outside the Caps’ blue line.  While Laughton got behind Carlson to chase the loose puck sliding into the Caps’ end, goalie Philipp Grubauer came out to play it.  He tried to sweep it to the side boards, but Laughton was there to gather it up, curl behind Grubauer, and dump the puck into the back of the net to make it 2-1, 18:58 into the period.

The Flyers ended the competitive portion of the contest in the first 11 minutes, Wayne Simmonds and Claude Giroux potting goals to give the Flyers a 4-1 lead.  Nicklas Backstrom got the Caps back within a pair just 13 seconds after Giroux’ goal, but Valeri Filppula slammed the door on any comeback with a goal with 2:55 left in the period to give the Flyers a 5-2 edge at the second intermission.

It was a case of the Flyers adding some decorative roses on the cake in the third period, scoring three goals in a seven-minute span mid-way through the period to send the Flyer faithful into the night in a happy mood.

-- Philipp Grubauer allowed eight goals on 37 shots and became the first Capitals goaltender to allow eight goals in a game since Olaf Kolzig allowed eight in an 8-1 loss to the Pittsburgh Penguins on January 25, 2006.

-- That 2006 blowout feature defensemen Ivan Majesky, Bryan Muir, Nolan Yonkman, Brendan Witt, Shaone Morrisonn, and Mathieu Biron.  This Caps defense was about as effective, although it was hardly their fault.  The forwards as a group played an indifferent game in terms of defensive support.  As Barry Trotz put it in the postgame, “Giroux’ line ate up Kuznetsov’s line.”  That would be the Evgeny Kuznetsov – Alex Ovechkin – Jakub Vrana line.  It might be noted that Ovechkin played just 3:29 in the third period, Kuznetsov played just 5:27, and Vrana was demoted to the third line by that time and played 5:00.

-- Another game, another 30-plus shot performance for the opponent.  The Flyers had 37 shots making it five times in six games the Caps allowed an opponent more than 30 shots.  For themselves, the Caps had 23 shots, the third time in six games they had fewer than 25 shots.

-- Madison Bowey made his debut and finished the game with a blank score sheet.  Except for that minus-2.

-- Fourteen of 18 skaters finished in minus territory for the Caps.

“The three words that best describe you are as follows, and I quote,
‘Stink, stank, stunk’!”

Or, as Barry Trotz put it… “we were absolutely stupid with the puck.”  It was as if the Caps were working the line at Geno’s Steaks at lunch hour…”here’s a puck, here’s another puck, here’s one for you, you want a puck?”

But it is one game.  After the Caps gave up eight goals to the Penguins in an 8-7 overtime loss last season (not coincidentally, the second of a back-to-back set of games, played on the road, and their third game in four nights, like this one), they went 26-10-2 to end the season.  Not that this team is as good.  It’s not.  But the point is that giving up eight goals or losing, 1-0, is one loss.  Move on.  Do better.