Washington Capitals: Half and Half - Comparing Seasons at the Half-Way Mark, Part III 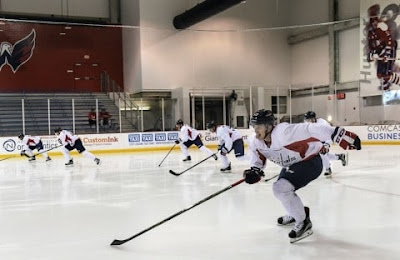 The Replacements and the Replaced

Through 41 games, ten skaters have taken the ice for the Caps who did not in the first half of last year’s season.  Those ten skaters have fewer combined man-games on their resume (196) than the group of seven players who skated in the first half last season but are no longer with the club (211).  Further on this theme, none of this year’s group has appeared in all 41 games (Alex Chiasson and Devante Smith-Pelly have appeared in 39 games apiece), while three skaters dressed for all 41 games in last year’s first half: Marcus Johansson, Justin Williams, and Karl Alzner.

There is something of a clean alignment among those replaced and those replacing them, a mix of three forwards and two defensemen in each population.  The forwards are Alex Chiasson, Devante Smith-Pelly, and Chandler Stephenson (107 man- games among them) in for Marcus Johansson, Jultin Williams, and Daniel Winnik (113 man-games in the first half last season).  For the defense, it is Madison Bowey and Christian Djoos (65 man-games) in for Karl Alzner and Nate Schmidt (75 man-games).  Let’s focus on this comparison for the moment.

What is surprising is not that the forwards in the core replacement group have a much lower performance level than those they replaced.  After all, is it primarily bottom six forwards replacing two top-six forwards in terms of appearances, if not roles, in Johansson and Williams, and a very productive fourth liner last year in Winnik.  What is surprising, to a point (and we will get to that below), is how much the performance trails the year-to-year change in performance among the defensemen.

Part of it is the ice time that goes with a replacement process the Caps have employed.  There are returner from last year who are playing bigger roles among the forwards (Tome Wilson, Jakub Vrana among them), and the replacement forwards here are filling in under that.  It explains how Chiasson, Smith-Pelly, and Stephenson all are averaging 12 minutes and change in ice time per night, while players they replaced on the every-night lineup were getting top six minutes (Johansson: 17:23 in the first half last season, Williams: 15:42).  And, Johansson and Williams got steady power play minutes (2:46 and 2:17 per game, respectively).  The three forwards getting sweaters this season combined for 1:04 per game.

On the other hand, and this should be expected given the roles of the replacements and who they are replacing, “grittership” numbers are higher for the incoming trio of forwards.  Credited hits are higher (111 to 43) and blocked shots are higher (79 to 50).  What they have not been is as skilled in winning faceoffs, combining for a 43.8 winning percentage versus 52.8 percent for last year’s group.

Replacing two veterans with 791 regular season games of experience with a pair of rookies with no NHL game experience is going to be a challenge.  Such is the case for the Caps, trying to get Madison Bowey and Christian Djoos up to speed rapidly with the departures of Karl Alzner (591 games with the Caps) and Nate Schmidt (200).

At some point, one would hope (if not expect) that either or both of Bowey and Djoos would put up bigger number than they have to date, a combined 3-13-16, plus-6, in 65 man-games to date.  But this number isn’t much different than the 4-12-16, plus-20 that the defensive duo of Alzner and Schmidt put up in the first half of last season.  This has to be tempered by remembering that Karl Alzner has spent his entire career as a defensive defenseman, and his numbers were never going to be big in these categories.  As for Schmidt, although he had 200 games with the Caps, he might still have been considered in the end stages of his developmental phase (which the Vegas Golden Knights are taking advantage of this season).

Ice time, as one might expect, also differs quite a bit with the Bowey/Djoos pair and the Alzner/Schmidt pair.  The latter averaged 20:13 and 15:01, respectively, while Bowey and Djoos have averaged less than 14 minutes per contest to date.  Still, accounting for the gap in experience and ice time, the performance of the new pair compared to the old pair is, if not a pleasant surprise, then certainly not the disaster it could have been.

This is not to say there aren’t issues, at an individual and pair level.  Bowey’s progress so far has been somewhat uneven, perhaps a product of missing some development time in the AHL to injury.  And, he is probably expected to be more of a two-way defenseman with more presence in the defensive end than Djoos.  In those respects, he probably trails Djoos on the progress meter at the moment.  Djoos has displayed talent and flair in the offensive end with a certain confidence that one might not have expected in a true rookie.  But on the other side, one does wonder if his lack of size will be a factor in the second half of the season and his progress going forward.

All that said, as a pair Bowey and Djoos have performed at about the level at which Alzner and Schmidt performed last season, which is something of a surprise, at the offensive end.  In the other end, in the “grittership” numbers, the picture is different.  The new pair’s numbers are down – credited hits (from 82 to 41), blocked shots (from 95 to 41), takeaways (from 33 to 18).  Not all of this can be explained away by ice time.  Quality of competition might explain a part of it, too, to the extent the new pair has been sheltered from higher-quality opposition, but there appears to be work to be done ahead in any case.

What we do not want to forget here is the matter of depth, those players who fill in for a few games over the course of a season, and in this respect a comparison is not only difficult, it is all but impossible.  If you take out Zach Sanford, who played in 20 games for the Caps in the first half before he was traded later (a player who was on a development arc that could have carried him into a top-six role), the only “fill-in” last season who did not return was Paul Carey, who played in three games.  This speaks to the health that the Caps enjoyed last season, allowing them to avoid players taking the Hershey Shuttle back and forth to and from DC.

This season, Travis Boyd, Tyler Graovac, Anthony Peluso, Nathan Walker, and Aaron Ness have combined for 24 man-games so far.  Out of that group, only Walker has scored a goal (his first in the NHL), and only Ness of the others has a point (an assist).  Although Capitals Nation has a fan’s affection for Nathan Walker, none of this group has worked his way into a position where he is a go-to replacement in the event of injury, let alone asserting themselves as a potential regular over the second half of the season.  If true, the Caps had better hope for better health in the second half.

This where the Caps’ failing to make good on their “all-in” approach last year has its consequences.  Rookies, free agent journeymen, and inexpensive role players replacing contributing fixtures in the lineup have their effects, and no one should have expected those effects to be improvements on the ice.  For the most part, they haven’t been.  And in that respect, one might say that it is the improvements among returning players from first half to first half that have the Caps where they are, not the contributions of the replacements, at least compared to the players they replaced.

This is not to say there haven’t been welcome efforts.  Smith-Pelly has shown an ability to contribute up and down the lines (or at least avoiding being a liability among the top-six).  Chiasson has been a decent, if not standout performer who has received a substantial amount of penalty killing responsibility (2:16 per game).  Walker, who has already done two separate tours with the club this season after being waived, claimed by Edmonton, waived again, and claimed by the Caps, does have the sort of speed and high motor that is valued in the NHL these days.

But will this group raise their performance level in the second half?  The answer to this question is one that, given the closeness of the standings in the Metropolitan Division, could be a, if not the difference in making the postseason and being on the outside looking in.
Posted by The Peerless at 8:30 AM

Email ThisBlogThis!Share to TwitterShare to FacebookShare to Pinterest
Labels: 2017-2018 season, NHL, the peerless prognosticator, Washington Capitals; half and half