“You must live in the present, launch yourself on every wave, find your eternity in each moment.”
-- Henry David Thoreau

If one looked at the career statistics of Lars Eller coming into this season with the Washington Capitals, one might conclude that he was a pretty good third line player, or even a serviceable second line player.  In eight seasons, he averaged 13-15-28 per 82 games and scored the gamut of special teams points, power play and shorthanded goals and assists.  But still, when one sees that he was the 13th overall pick of the 2007 draft, taken between defensemen Ryan McDonagh and Kevin Shattenkirk, one might have wondered if Eller had achieved all such a draft pick should have achieved.  He was a reliable low-teens goal scorer and upper 20’s point producer, but he never scored more than 16 goals in a season, never recorded more than 30 points.

The new contract could have been interpreted as a bargain in service to stability at the third line center position, since it compensates Eller at the same average annual value ($3.5 million) as the contract that expires with the end of the 2017-2018 season.  It looked like even more of a bargain when Eller posted seven goals and ten points in his last 28 games of the regular season.

Looking at his ten-game segments, the one thing that stands out is how his season cleaves into two halves as far as goal scoring goes.  He had just five goals in his first four ten-game segments, but he closed with 13 in his last four segments.  That second half of the season included ten even strength goals, doubling his first half total, and all three of his power play goals for the season.  He was significantly more efficient in his shooting as well, with a 15.1 percent shooting percentage over his last four segments, compared to the 6.7 percent he recorded in the first four segments. 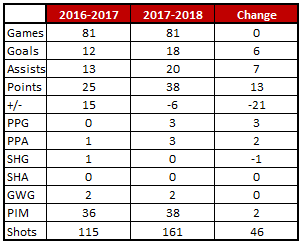 Fearless’ Take… Eller shattered his career offensive numbers posting a career high in goals with 18 (he had 16 in 2011-2012 with Montreal) and points with 38 (he had 30 in 2012-2013 with the Canadiens).  His 15 even strength goals was a career best, as were his six power play points and 161 shots on goal.  And, buying into the two-way approach the Caps adopted as the season wore on, he had his best year blocking shots (69).

Cheerless’ Take… That minus-6 he had was only worse in two other seasons – 2015-2016 (minus-13) and 2013-2014 (minus-15), both with Montreal.  He was not an especially effective possession player, ranking seventh among Caps forwards appearing in at least 40 games in shot attempts-for percentage at 5-on-5 (47.89 percent).  And, being a center on a third line, presumably a checking line trying to deny possession, one might have liked to see better faceoff numbers.  In 63 games in which he took at least ten draws, he was over 50 percent only 25 times.

Odd Eller Fact… “Shooting Eller” equaled Caps success.  Six times this season Eller recorded at least five shots on goal.  The Caps won all of them.  Eller had goals in four of those games.

When the Capitals took the ice on November 2nd against the New York Islanders at Capital One Arena, they just returned from their three-game tour of western Canada, one in which they went 1-2-0 to extend a rough start to the season.  After the trip, the Caps were just 5-6-1 in their first dozen games.  Meanwhile, the Islanders were winners of seven of their first dozen games, and they gave Caps all they might have wanted.  Washington just could not put the visitors away.  Three times the Caps scored, and three times the Islanders tied the game, the last time coming with seven minutes gone in the third period on a goal by Anders Lee, his second of the game.

It looked as if the game might go to overtime and the time grew short in regulation, but the Caps had a chance late.  Brooks Orpik left the puck at his own goal line for John Carlson to circle around the net.  Coming out the other side, he banked a pass off the right wing boards to Tom Wilson in front of the players bench.  Wilson dropped the puck off for Eller cutting through the neutral zone, and Eller hauled it into the Islanders’ end.  With Chandler Stephenson cutting to the net down the middle and presenting a distraction, Eller curled in and snapped a shot that beat goalie Jaroslav Halak over his glove and under the crossbar with just 3:21 left for the game-winning goal in a 4-3 decision.  It was Eller’s second goal of the game and completed what would be his only three-point game of the season and his first as a Capital.  And, it was the last time the Caps were under .500 for the season.

When the Caps headed up I-95 to Philadelphia on March 18th, they might have been feeling pretty good about themselves.  They were taking a four-game winning streak to Philadelphia, their longest winning streak since a five-game streak straddling the end of 2017 and the beginning of 2018.  Eller was doing his part, recording goals in three of the four wins, including his 100th career goal, an empty-netter in a 2-0 win in San Jose against the Sharks.

The Caps and Flyers fought to a scoreless draw in the first period, but they were clocked by the home team in the second, allowing a Shayne Gostisbehere goal just 2:15 into the period (Eller was on ice) and finding themselves on the short end of a 3-1 margin at the second intermission.  Philly added a fourth goal just 97 seconds into the third to end the competitive portion of the contest (Eller was on ice for that one, too).  Philly won, going away, 6-3, with Eller on the ice for four of the Flyer goals, his minus-4 for the contest being his worst of the season and only the second time he was that low on the plus-minus ledger for a single game with the Caps.

But for one shining season before this one, Lars Eller had his postseason challenges.  In 17 games with the Montreal Canadiens in 2014, Eller was 5-8-13, plus-6, had a shorthanded goal and his only postseason game winning goal (against Boston in Game 6 in the second round, setting up a Montreal series win in Game 7).  In his other four trips to the playoffs…yeesh.  In 33 games he was 1-9-10, minus-1, his only goal of the shorthanded variety.

Well, that was then, and boy, was this now.  Eller had a fabulous postseason.  Let’s start with the goals.  He set a career best in postseason goals with seven.  The first and last were of the game-winning variety, the first of them in double overtime to give the Caps a 3-2 win over the Columbus Blue Jackets.  With the Caps staring down the barrel of an 0-3 deficit in games if they lost, it is hardly hyperbole to say that Eller’s overtime winner saved the season.  His last was the game-deciding, series-clinching, Cup-winning goal, coming with just 7:37 left in Game 5 that the Caps won, 4-3.  Eller had a third game-winning goal to his credit, coming in Game 2 of the Caps’ conference final series against the Tampa Bay Lightning.  Eller was one of three players in the postseason to record three game-winning goals (Paul Stastny and Nikita Kucherov were the others).

There were the points.  Eller finished the postseason with a career-best 18, but it was his ability to score in bunches that stood out.  He had four multi-point games that, while tied for 18th in the postseason, was as many as Kucherov (third in the league in the regular season with 100 points) and Steven Stamkos.

His time on ice was valuable.  The Caps were 11-4 in games in which Eller skated at least 16 minutes, 5-4 in games in which he did not.  He established career high for postseason shots on goal (52), hits (53), takeaways (10), and average time on ice (17:00).  He might not have had a “Conn Smythe” level of postseason, but if there was a “Most Important Player,” he might have been a finalist.

Lars Eller’s postseason is a thread that connects many moments, most of them of the game-changing, series-swaying variety.  He displayed an assertiveness that seemed to be lacking in the past, especially when he came up without a goal in the 2017 postseason for the Caps (a common malady among bottom-six forwards last spring).  And his ability to fill in for Nicklas Backstrom on the second line when Backstrom was injured was the sort of “stepping up” that coaches talk about, but rarely occur.  He was a player fully immersed in the present.  For Eller, it might be hard to single out a moment that stands out among the rest.  You might say that he had more than he could count.