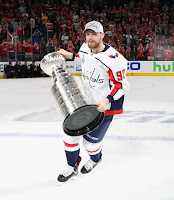 “Ambition is the path to success. Persistence is the vehicle you arrive in.”
-- Bill Bradley

Evgeny Kuznetsov has spent a good part of his career a bit behind himself, trying to catch up with his considerable talent.  It started with the 2010 NHL entry draft.  Going into the draft, Kuznetsov was the third-ranked European skater according to Central Scouting, behind Mikael Granlund and Vladimir Tarasenko.  However, he slipped to 26th in the first round, taken by the Washington Capitals.  Then there was the matter of coming to North America after that draft.  Kuznetsov would play four more seasons with Chelyabinsk Traktor in the KHL before he came across to North America at the end of the 2013-2014 season as a 21-year old.  He appeared in 17 games at the end of that season, offering the occasional glimpse into his offensive repertoire, finishing 3-6-9.

His next three seasons were a jumble of inconsistencies.  He showed improvement in the regular season in the two full seasons following his brief first-taste of the NHL, increasing his goals to 11, and then to 20 the following year, and increasing his points to 37 in his first full season, and then to 77 the year after that.  His postseasons did not measure up, though.  He did have five goals in 14 games in his first postseason appearance in 2015, but he had only one goal and two points in 12 games in the 2016 postseason.  In 2016-2017, he took a step back in his regular season numbers, posting 19 goals and 57 points, a 20-point drop from the previous season.  But he did offer a look at coming attractions when he went 5-5-10 in 13 games of the 2017 playoffs.

With respect to his “tens,” Kuznetsov started and ended strong.  He had an amazing 12 assists in his first ten games, corresponding to the fast goal-scoring start his linemate Alex Ovechkin had.  He eased off a bit over his next two segments, Points-wise, even as his goal totals ramped up.  The point totals dropped a bit in the mid-season portion of the schedule, but he closed with a rush.  Kuznetsov had 14 points in each of his last two segments, made even more amazing in that he missed three games in this last stretch of the season.  The 28 points in 19 games was a 121-point pace over a full season. 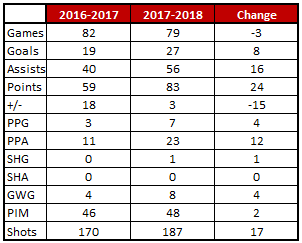 Fearless’ Take… It might not sound like much, but Kuznetsov is just the 14th player in Caps history to record two or more seasons with more than 75 points, and he is just one of four with two or more such seasons since the 2004-2005 lockout (Alex Ovechkin (9), Nicklas Backstrom (5), and Alexander Semin (2) being the others).  What makes Kuznetsov’s accomplishment stand out is his having done it in only four full seasons.  Already, he ranks 26th in franchise history in assists (185), and he needs just 27 more to jump into the top 20.  Among players appearing in at least 100 games for the franchise, he is 11th in assists per game (0.54), but it would not take a big jump in output next season to pass Bengt-Ake Gustafsson (0.57 per game) for sixth place.  Kuznetsov would still appear to have growing room in his career development arc.

Odd Kuznetsov Fact… Blocking shots really isn’t Kuznetsov’s thing, but when he did get in the way of shots, it was generally part of a happy evening.  The Caps were 17-2-2 in the 21 games in which he blocked a shot.  As far as the grittership goes, there are limits, though.  Washington was just 6-6-1 in games in which he had at least two credited hits.

There might have been no other game Evgeny Kuznetsov has played for the Capitals stranger than the one he played in the home opener of the 2017-2018 season.  It was a night largely remembered for the four goals Alex Ovechkin recorded against the Montreal Canadiens, coming on the heels of his hat trick in the season opener in Ottawa two days earlier against the Senators.  But for every goal, or for most of them, anyway, there is someone setting them up.  And there was Kuznetsov serving up pucks faster than a bartender schlepping drinks at happy hour.

It started just 20 seconds into the game.  Kuznetsov gathered a loose puck along the right wing wall and flung it to the middle, where Jakub Vrana redirected it to Ovechkin cutting across behind him.  Ovechkin spun and sent a shot that sailed over goalie Carey Price’s glove to give the Caps the early lead.  After T.J. Oshie scored just 26 seconds later, the Caps found themselves on a power play.  Kuznetsov found Ovechkin when he walked in at the right wing circle to lure the defense to him, and with a passing lane created found Ovechkin on a cross-ice pass for a one-timer to make it 3-0 just 2:51 into the game.

Late in the period, Kuznetsov took a pass from Aaron Ness at the top of the left wing circle and fired a shot ticketed for the short side of the net to Price’s right.  Ovechkin got the blade of his stick on the puck as it was heading through and redirected it under Price’s blocker to make it 4-0 with 1:50 left in the period.  Late in the second period, with Al Montoya in the Montreal net in relief of Price, Kuznetsov and Ovechkin worked a give-and-go.  Ovechkin left the puck for Kuznetsov curling into the right wing circle.  Kuznetsov returned it to Ovechkin cutting toward the net from the goal line extended to Montoya’s left.  Ovechkin stepped through the top of the crease and backhanded a shot that trickled under Montoya and in to make it a 5-1 game 16:46 into the period.

In a game that the Caps went on to win, 6-1, Kuznetsov had his fifth four-point game as a Capital, his second four-assist game.  What made it strange wasn’t that he did it with just 17:28 in total ice time or that he had his four assists before the second period was over.  What made it strange was that he did it without recording so much as a single shot attempt.  Call it a "Kuznetstrick."

No one who paid the price of a ticket got a better view of the carnage the Philadelphia Flyers rained on the Capitals in an 8-2 pasting on October 14th than Evgeny Kuznetsov. The Caps were in Philadelphia trying to improve on a 3-1-1 start to the season, but in doing so they had a bit of difficulty keeping pucks out of their own net, allowing three or more goals in three of the five games played to that point.

That problem expressed itself early for the Caps, who fell behind by a 2-1 margin in the first period.  Kuznetsov was on ice for both goals, one of them a shorthanded goal with 62 seconds left in the period.  He would be left stranded at the Philadelphia blue line as the other four Caps were running around in their own end trying to keep Scott Laughton from gathering a puck goalie Philpp Grubauer came out from his crease to poke away that Laughton deposited into the vacated net.

After Nicklas Backstrom scored a goal mid-way through the second period to get the Caps back to a 4-2 deficit, Kuznetsov looked on from up close when Valteri Filppula scored late in the period to make it a 5-2 game at the second intermission.  He was on the ice when Laughton got his second of the game eight minutes into the third period.  He was on the ice when Claude Giroux closed the scoring with under five minutes left, making it five goals for which Kuznetsov would have an on-ice view in what was an 8-2 Flyers win, the Caps’ worst of the season.  In addition to the five goals-against for which he was on ice, Kuznetsov did get an assist, on a goal by Jakub Vrana in the first period, but he had only one shot attempt (shot on goal), two giveaways, and lost eight of 12 draws.  Yeah, you can safely forget that one.

Evgeny Kuznetsov became the 21st player in NHL history to record 30 or more points in a postseason when he posted 32 in 24 games to lead the league in playoff scoring.  It was only the fifth instance since 2006 that a player finished a postseason with 30 or more points and only the second since 2010 (Logan Couture had 30 points in 2016 for San Jose).  Kuznetsov’s 12 goals was more than his career postseason total (11) in 39 playoff games before this season.  His 20 assists more than doubled his career postseason total before this year (eight).

What was noteworthy about his 2018 postseason performance was its consistency.  He had points in 19 of the 24 games in which he played, held off the score sheet only once in his last 15 games.  The consistency did not keep him from scoring points in bunches.  He had seven multi-point games in the postseason, tied for third (with Nicklas Backstrom and Sidney Crosby) for third-most in the league, behind Alex Ovechkin (eight) and Mark Scheifele (nine).  And, no player had more games with three or more points than Kuznetsov (four), including a pair of four-point games.

And of course, there was this, which put him in a special place in the hearts of Caps fans young and old…

All told, it was a body of work that earned Kuznetsov serious consideration for the Conn Smythe Trophy as the most valuable player of the postseason.  He finished with five of 18 first-place votes and 13 of 18 second-place votes.

This is the Evgeny Kuznetsov that Caps fans have been waiting for since he was drafted in 2010.  There are better playmakers, there are more prolific goal scorers, and there are faster and perhaps niftier skaters.  But there are not all that many in any of those categories.  He is as complete an offensive force as there is in the league, combining a creative playmaking touch with a growing assertiveness in putting pucks on net.  Kunzetsov was not just hot to end the season, he was scalding, third-degree burn hot.  Over his last 59 games, including the postseason, he was 26-49-75, plus-17.  That is a 36-68-104, plus-24 pace over 82 games.  Consider in that context that 43 of those 59 games were played against playoff teams.  He didn’t do it facing a bunch of palookas.