The Peerless Prognosticator is ON THE AIR!!! -- Game 3: Golden Knights at Capitals, October 10th

The Washington Capitals have had five full days off since their back-to-back opening to the 2018-2019 season, beating the Boston Bruins last Wednesday, 7-0, and falling in overtime to the Pittsburgh Penguins in overtime, 7-6, on Thursday.  And now they get to go the Wednesday-Thursday, home-away, back-to-back thing all over again.

The front end of that back-to-back will see the Caps hosting the Vegas Golden Knights in the teams’ first meeting since June 7th, when the Caps danced the Stanley Cup around T-Mobile Arena in Las Vegas.  It is a new season, and the teams are headed in opposite directions in the early going.  While the Caps have that dominating win and an overtime loss in which they came back from two goals down in the third period to secure a standings point, Vegas was rocked by the Philadelphia Flyers in their home opener, 5-2, eked out a Gimmick loss in Minnesota when they scored late in the third period to force extra time, and then dropped a 4-2 decision in Buffalo to the Sabres on Monday.

That Vegas got that standings point in Minnesota was the product of a late 6-on-5 flurry with their goalie pulled, Max Pacioretty one-timing a feed from Jonathan Marchessault with 1:31 left in regulation to force overtime.  Pacioretty was one of the players caught up in a flurry of housecleaning by the Montreal Canadiens over the summer.  It took the Habs until September to pull the trigger, but they sent the left winger to the Golden Knights for forward Tomas Tatar, Nick Suzuki, and a second round pick in the 2019 Entry Draft.  He brings a solid resume to the desert – 226 goals and 448 points in 626 regular season games before this season, which include among them five 30-goal seasons.  He has been something of an all-or-some kind of player, though.  In addition to his five 30-goal seasons, Pacioretty had five seasons in which he scored 17 or fewer goals, that 17-goal season coming last year.  Vegas is hoping for something more.  In 28 career games against Washington, Pacioretty is 5-11-16, minus-2.

The trouble with scoring 43 goals in 82 games when you scored a total of 18 goals in 183 games over three years preceding that season is that there is the lingering sense that the player has something left to prove, that his big season was not an outlier.  That is the situation William Karlsson faces in his second season in Las Vegas.  Almost as amazing as his 43 goals for the Golden Knight was his finishing plus-49 for the season.  Not only did that lead the league by a wide margin (teammate Jonathan Marchessault was plus-36), it was the second highest plus-minus since the 2005-2006 season (Washington’s Jeff Schultz was plus-50 in 2009-2010).  He has yet to light the lamp this season, but that might not be a sign of significance, and not just because it has been only three games.  Last season, Karlsson was without a goal in his first six games before he went on a tear in which he had 13 goals in his next 16 games.  He is 1-3-4, minus-2, in 12 career games against the Caps.

The season is but three games old for the Golden Knights, but there is no clearer example of “then and now” than goalie Marc-Andre Fleury.  Last season, Fleury opened the season over his first three games by going 3-0-0 (T-1st in wins), 1.32 (seventh), .963 (sixth; minimum: 60 minutes played).  Three games into this season he is 1-2-0, 3.93 (28th), .841 (28th; minimum: 60 minutes played).  He lasted barely 30 minutes in Vegas’ season opener, allowing all five goals on 16 shots in a 5-2 loss to the Philadelphia Flyers.  He was much better in his next outing, stopping 29 of 30 shots in regulation and overtime, and all three trick shots in a 2-1 Gimmick win over the Minnesota Wild.  He could not maintain that level of performance in his third appearance, though, allowing four goals on 17 shots in a 4-2 loss to the Buffalo Sabres on Monday.  He has allowed four or more goals twice in three games after allowing four or more only five times in 46 appearances last season.  Fleury is 22-12-2, 2.54, .914, with four shutouts in 38 career appearances against the Capitals. 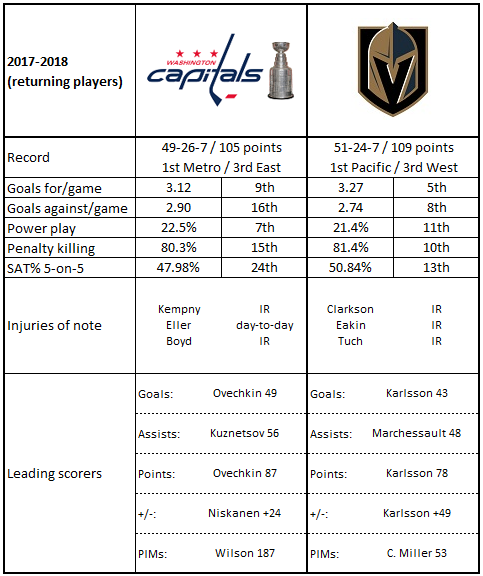 4.  As of Tuesday afternoon, Vegas is one of nine teams yet to score a power play goal so far this season, and they get off to bad starts. They have only one first period goal so far, while allowing four.

5.  You would think that Vegas will turn things around in short order if they can maintain one set of numbers.  The Golden Knights rank fifth in shot attempts-for percentage at 5-on-5 (60.32) and are second in that statistic in close situations (63.08).

1.  Washington has the best goal differential in the Eastern Conference as of Tuesday afternoon (plus-6).  In the West, only Colorado is as good, and only Dallas is better (plus-7).

2.  In the first three games the Caps played against Vegas last season (two regular season and Game 1 of the Stanley Cup final), all of them losses, Washington was outscored 13-7.  In the last four games the teams played, swept by the Caps, Washington outscored Vegas, 16-8.

3.  The Caps have dressed the same 18 skaters for their first two games.  Of that number, 15 already have points this season.

4.  It is early, but Alex Ovechkin does not lead the team in shots on goal.  At least not outright.  He, Brett Connolly, and Evgeny Kuznetsov have eight shots on goal apiece.

5.  There have been 584 skaters to dress in the NHL so far this season.  Eight of them scored a goal on the only shot on goal they recorded to date.  One of them is Caps defenseman Brooks Orpik.

Jonathan Marchessault scored 27 goals last season in 77 regular season games.  He added eight goals in 20 postseason games.  None of those goals were scored against the Caps, not in the two regular season games in which he played, nor the five postseason games in which he played.  What Marchessault was last season for Vegas was consistent.  After an October in which he had three goals in eight games, he ranged between four and six goals per month over the next six months.  And, he was reasonably consistent across venues, scoring 15 of his 27 goals in 38 home games and 12 of them in 39 road games.  However, while he was not far off the 30-goal season that established him as a player to watch with the Florida Panthers in 2016-2017, there was a significant year-to-year difference in his performance.  The 30 goals he recorded with Florida two seasons ago were the result of 193 shots on goal, a 15.5 shooting percentage, 12th among 172 skaters with at least 150 shots on goal.  Last season with Vegas he had 27 goals on 268 shots, an 10.1 shooting percentage, 103rd among 197 players with at least 150 shots on goal.  Marchessault is looking for his first career goal against the Caps.  He is 0-5-5, even in eight games against Washington.

John Carlson has not let his big contract get in the way of a fine start to the season.  And he has picked up where he left off last season.  Carlson led all defensemen in points last season (68), was tied for eight in goals (15), was tied for third in assists (53), was second in power play points (32).  That led to an eight-year/$64 million contract signed in the offseason.  Through two games this season, Carlson is 2-2-4, with two power play points.  Those four points are tied for fourth among defensemen, despite having played one fewer game than the three defensemen ahead of him on Tuesday afternoon.  Those two power play points are tied for second in that group, and his 26:04 in average ice time ranks fifth.  He is one of only three defensemen in the league to average more than three minutes per game in both power play and penalty killing (Victor Hedman and Alex Edler being the others).  Carlson is looking for his first regular season career point against Vegas after being blanked in two games last season.

The “sophomore slump” phenomenon is one generally attributed to players who slump after a successful rookie season.  The 1-2-0 start for Vegas and their struggles in both scoring offense and scoring defense make one wonder if it isn’t something to which this team will succumb this season after an historic inaugural season.  Much depends on whether all of those career years among the skaters last season are replicable, or if they were just one-offs.  And, will Max Pacioretty fill the scoring shoes of James Neal, departed for Calgary in the offseason?

Compared to the Golden Knights, the Caps are a much better known commodity in terms of their likely performance.  They had good years among many skaters last year, but it wasn’t one dominated by career years.  But the Caps do have to find a happy medium in the defensive end of the ice between the stinginess shown the Boston Bruins in the 7-0 season opening shutout and the generosity bestowed upon the Pittsburgh Penguins in the 7-6 overtime loss last Thursday.  Teams with different sets of issues makes for an interesting matchup, even if the stakes are not quite as high as they were when they last met.