The Peerless Prognosticator is ON THE AIR!!! -- Game 54: Avalanche at Capitals, February 7th

The Washington Capitals, winners of two of their last three games, try to make it consecutive wins for the first time in four weeks when they host the Colorado Avalanche at Capital One Arena on Thursday night.  The Caps, having played three straight one-goal games since returning from the All-Star Game break and bye, are 2-6-2 since winning three in a row from January 6 – 10.

If the Capitals have struggled over the last four weeks, the Avalanche are in free fall.  They will take the ice on Thursday in the midst of a four-game losing streak and are 7-16-4 since they ran off a six-game winning streak in late November that left them at the time with a 15-6-4 record, one point behind the Nashville Predators for the best record in the Western Conference.

That 7-16-4 record since November 29th is the worst in the league since then, a product of the league’s most porous scoring defense (103 goals allowed).  And that starts with goaltending, which frankly, has been nothing for a highlight reel.  The appearances have been roughly split between two former Capital netminders, Semyon Varlamov with 16 appearances and Phillpp Brubauer with 13 (Pavel Francouz had two in that span, both of them losses).

Varlamov is 4-8-3, 3.50, .879, with one shutout in that span, and in only eight of his last 14 appearances has he allowed fewer than four goals.  It is not as if he is being pelted with rubber, either.  Varlamov has faced 28.8 shots per 60 minutes in his last 16 games after facing 31.9 shots per 60 minutes in his first 16 games, over which he posted a .927 save percentage.  Varlamov, now in his eighth season in Colorado after spending his first three NHL seasons in Washington, is second in franchise history among goaltenders, specifically Patrick Roy, in a variety of statistics:
In seven career appearances against Washington, Varlamov is 3-4-0, 2.31, .937.

Grubauer is in his first season with the Avalanche after establishing himself as perhaps the best backup goaltender in the game with the Caps.  He went to Colorado for the chance to contend for a number one spot, but things have not gone according to plan.  Unlike Varlamov, whose recent play is a substantial deterioration from his season start, Grubauer has struggled from the start in his underlying numbers, although his numbers are off even more lately.  After a 6-1-2, 3.06, .904 start in nine appearances, he is 3-6-1, 3.81, .877 in 13 appearances in the Avs’ 7-16-4 run.  His struggles have become only more acute of late.  In each of his last three appearances, all of them losses, he allowed at least five goals and stopped only 68 of 84 shots (.810 save percentage).  In his only appearance against the Caps to date, he dropped a 3-2 overtime decision on November 16th.

Meanwhile, the top line in hockey (according to some) continues to drive offense for Colorado.  The trio of Gabriel Landeskog (14 goals), Mikko Rantanen (13 goals), and Nathan MacKinnon (nine goals) accounts for almost half (36) of the Avalanche’s 78 goals in their slide since late-November.  That this trio scores often, and that the team depends on them to produce are obvious observations.  Another, less obvious factor important to their and the team’s success has been their durability.  The three have combined to dress for all 52 games this season.  That is a bit unusual for this group in that over the five previous seasons that MacKinnon and Landeskog have played for the Avalanche, they have a total of three seasons between them in which they appeared in all 82 games (MacKinnon twice and Landeskog once), and never together in the same season.  Rantanen did not appear in an entire season’s worth of game in any of his three full NHL seasons preceding this one.

Here is the important thing to note about this trio.  In each of Colorado’s 22 wins this season, at least one of this threesome recorded a goal; 18 times in those 22 games at least two of them recorded goals.  In 14 games this season, none of the three recorded a goal.  Colorado is 0-12-2 in those games.  The moral is that while Colorado does not always win when they do score (22-10-6 when at least one of them records a goal), they never win when they don’t.  MacKinnon is 4-8-12, plus-1, in ten career games against the Caps; Landeskog is 5-7-12, even, in 12 career games against Washington; and Rantanen is 2-4-6, even, in four career games against the Capitals. 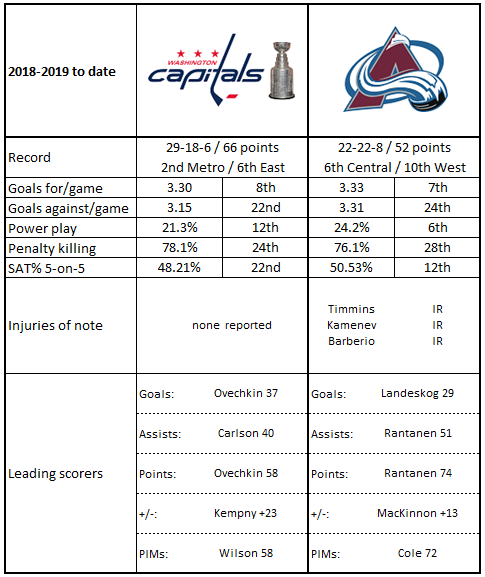 1.  Despite their 7-16-4 record in their last 27 games, Colorado is minimizing shots on goal.  The 804 allowed is the fifth-fewest in that span through Tuesday’s games.

2.  While the Avs have prevented shots, it has not mattered on their penalty kill.  Their 70.9 percent kill rate is worst in the league in their 27-game slide.  And, they have to deploy that penalty kill often, the 86 shorthanded situations faced being tied for seventh over that span.

3.  The penalty kill performance has been weak, but the power play has had its own issues.  In this 27-game stretch, Colorado has had more power plays, by far (112), than the team with the next highest total (Carolina: 97 in two more games played), 26 more power plays than shorthanded situations.  However, they have only 21 power play goals (18.8 percent) while allowing 25 power play goals.

5.  Either Colorado plays games with extremely abnormal puck protection, or there are some odd scoring conventions in the games they play.  In their 7-16-4 stretch, the Avalanche have, again by far, the lowest combination of giveaways (178, second-fewest in the league in that span) and takeaways (147, fewest in the league).  The combined 325 turnovers is 14 fewer than the Vancouver Canucks (188 giveaways/151 takeaways).

1.  Do power play chances matter to the Caps?  To a point, yes.  In 17 games in which Washington has four or more power play opportunities this season, they are 12-5-0.  However, they are 3-3-0 when getting five or more chances.

2.  Minimizing shorthanded situations…good or bad?  The Caps are 9-5-1 when holding opponents to two or fewer power play chances.

4.  Failure to get shots on goal…good or bad?  Washington is 9-5-0 when recording 25 or fewer shots on goal of their own.  By the way, only once this season did the Caps and their opponent record 25 or fewer shots.  The Caps had 19, and the Islanders had 25 in a 2-0 loss to New York on January 18th.

Carl Soderberg gets lost in the glow of the Avalanche top line, but one should not overlook the fact that with 17 goals, he has already established a new career high in just 52 games and at the age of 33 to boot.  Soderberg was something of a late bloomer, drafted in the second round of the 2004 entry draft by the St. Louis Blues, but not getting his first full NHL season until the 2013-2014 season with the Boston Bruins at age 27.  It was in that season that he established his previous career high in goals (16, matched last season with Colorado).  The odd part of his offensive contributions this season seems to be summarized by the adage, “it is better to give than to receive.”   Colorado is 8-5-2 in games in which Soderberg recorded at least one goal, but they are 9-2-2 in games in which he recorded at least one assist.  He has been more productive of late in goal scoring, posting seven in his last 13 games, including a hat trick, and an odd one at that (even strength, shorthanded, and empty net), including the game-winner in a 6-3 win in Toronto over the Maple Leafs on January 14th.  Soderberg is 2-8-10, minus-1, in 14 career games against Washington.

When Alex Ovechkin recorded an assist on T.J. Oshie’s goal to open the scoring in the Caps’ 3-2 win over Vancouver on Tuesday night, he passed Sergei Fedorov as the top Russian-born point producer in NHL history (1,180).  It put him one point closer to 1,200 in his career, and it serves to remind that he is once and always locked up with Sidney Crosby in one race or another.  Now, it is which of these two will be the first to join Joe Thornton as the only active players with at least 1,200 points in their careers.  Ovechkin holds a three-point lead on Crosby, but Sid, given the nature of his position and responsibility, which involves a larger playmaking element, might be in a position to draft Ovechkin and reach the finish line first.  Not that Ovechkin has been slacking off.  He has 13 points (eight goals, five assists) in his last 14 games.  However, Crosby has 23 points in his last 18 games (seven goals, 16 assists).

It would not be padding stats to add to that point total in pursuit of 1,200.  The Caps are 25-9-3 in the 37 games in which Ovechkin has at least one point this season, 3-9-3 in the 15 games in which he does not.  The Avalanche is one of the few teams against which Ovechkin struggles a bit.  In 17 career games against Colorado, he is 7-5-12, plus-1.  His 0.41 goals per game against Colorado is his second lowest goals-per-game among the 30 teams he has faced (Los Angeles: 0.29 goals-per-game in 17 games), and his 0.71 points per game is lowest among any NHL opponent he has faced.

Colorado is a mess.  Worst record in the league over the last ten weeks, one road win in the last two months (1-7-1).  They cannot stop opponents from scoring, and their special teams are disappointing.  Neither goaltender is putting the team on his back and dragging it out of their malaise, and they are essentially a one-line team that doesn’t win if that line doesn’t produce.  The Caps are hardly on a roll, but at least they do have wins in two of their last three games, while Colorado has two wins in the last month.  Depending on whether goalie Braden Holtby was injured more seriously than it seemed at the end of Tuesday’s win over Vancouver, this could be a rather high-scoring affair.