Washington Capitals: That Was The Week That Was - Week 25

We started last week's installment by saying that "Week 24 was a roller coaster of a week with ups and downs and twists and turns against rivals old and new.  In the end, the ride came to a stop right where it started with a two-win two-loss week and the Caps still in charge in the Metropolitan Division."  Well, here we are again, in same place, taking the same trip, in Week 25. 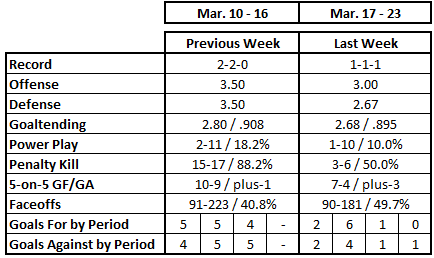 For the first time since Weeks 20 and 21 last season, the Caps finished with consecutive non-winning weeks.  As they did in that instance, they finished consecutive weeks earning half of the available standings points.  The odd thing about the week, perhaps, was that the win came on the road.  The 4-1 win in New Jersey against the Devils was the Caps’ 22nd road win of the season, tying for the fifth-most road wins in a season in team history (the 2015-2016 team has the most: 27).

Having lost both home games in Week 24, the Caps failed to match the 22 road wins for the season, finishing the week stuck on 21 wins at Capital One Arena.  That means that this team cannot work its way into the top ten in team history in road wins for a season, the most they could finish with being 25.  The two losses at home for the week snapped a five-game home winning streak and were the first instances of losing consecutive games on home ice in more than two months (January 18th and 22nd, the end of a four-game home losing streak). 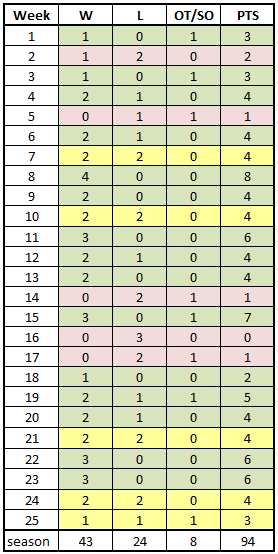 If it was not a prolific week for the Caps, it was balanced.  Seven players shared the nine goals scored; Evgeny Kuznetsov and Brett Connolly the only Capitals with two.  Connolly, T.J. Oshie, and Carl Hagelin shared the team lead in points with three apiece.  Kuznetsov had the late game-tying goal in the 5-4 overtime loss to Tampa Bay in the middle game of the week, giving him eight goals in eight home games and goals in three of four games overall before he was kept off the board against Minnesota to close the week.  Connoly’s first goal of the week, in the Caps’ 4-1 win in New Jersey over the Devils, was his 20th of the season, giving him the first 20-goal season of his eight-year career.  Oshie’s three points for the week gave him 15 points in his last 18 games (6-9-15) and 48 points for the season, surpassing his total for last year (47).

The Caps were a productive team on home ice over the past six weeks, posting 36 goals in their previous eight home games going into the week.  They managed to add to their string of games on home ice with three or more goals when they put up three against Tampa Bay in the first game of the week.  However, the streak came to an end at nine games when the Caps dropped a 2-1 decision to the Minnesota Wild on Friday night.

It might be too facile to conclude that the difference is the trading deadline acquisitions of Nick Jensen and Carl Hagelin, but that is the demarcation point between the poor performance in this category and the fine performance since.  It is at least coincidental that those under-the-radar pick-ups have paid dividends in areas where the Caps were weak earlier this season.

And the backup shall lead them.  Well, for one week, anyway.  Pheonix Copley had a fine game in New Jersey against the Devils to start the week, stopping 20 of 21 shots on goal in the Caps’ 4-1 win.  It was Copley’s sixth straight win, over which he has a goals against average of 2.61 and a save percentage of .913.  He has benefitted from good goal support in that stretch, the Caps scoring 26 goals in the six games (4.33 per game).

Braden Holtby drew the difficult opponent for the week, the league-leading Tampa Bay Lightning in the first of the two games he played for the week.  He was a perfect 15-for-15 in the combined first and third periods of that game.  Unfortunately, he allowed four goals on 11 shots in the second period, and after the Caps crawled back late in the third period to force overtime, he was victimized by some leaky defense that allowed Victor Hedman to hold the puck…and hold it…and hold it, until he snapped a shot past Holtby to deny the Caps and Holtby the win.  Holtby was stout in the third game of the week, allowing only two goals on 27 shots to the Minnesota Wild.  The Caps could manage only one shot on 22 shots, though, and Holtby was a loser for a second consecutive game.  It was his third loss in a row (0-2-1), the first time he suffered losses in three consecutive appearances since he dropped three in a row (0-2-1) to Edmonton, Montreal, and Dallas in late October and early November.

Goal support has become a minor issue with the goaltenders.  Since January 1st, in games in which he earned the decision, Copley has backstopped a team that averaged 3.42 goals per game, going 7-3-2 in the process.  IN the 25 games in which Holtby earned the decision, the Caps averaged 3.08 goals per game.  This is not unusual on its face, since Copley was more likely to draw an easier opponent.  Seven of his games were against teams not currently playoff eligible, while 11 of the 25 games in which HOltby earned a decision were against teams not playoff eligible through Week 25.

It might have been expected that the Capitals’ power play would struggle some with a pair of top-ten penalty killing teams in New Jersey (83.9 percent/ninth at the end of the week) and Tampa Bay (88.3 percent/second).  And they did, going 1-for-7 against those teams.  The Caps did not manage so much as a single power play shot on goal on their lone power play against the Devils.  They went to the other end of the spectrum against the Lightning, to little avail, scoring their lone goal on 16 shots.

The headscratcher was the game against Minnesota, a team that finished the week ranked 25th in the league in penalty killing 77.9 percent).  The Caps came up empty on three power plays against the Wild and managed only a single shot on goal, that one from John Carlson.

The Caps have had trouble getting into any rhythm on their power play lately.  They have alternated games with power play goals with games without one over their last eight contests and are 4-for-26 over that span (15.4 percent).  The truth is, the Caps have been a rather middle-of-the-road power play team since January 1st, posting a 19.0 percent conversion rate, 15th in the league. 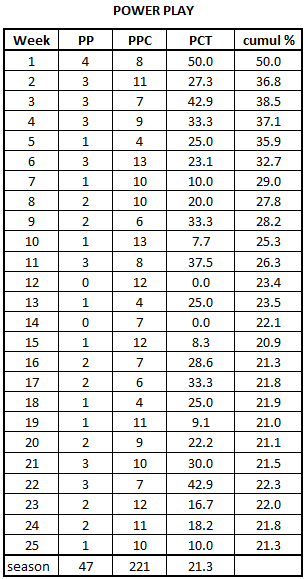 The Caps’ inconsistency in their penalty killing for the week extended to their efficiency in limiting shots.  They held the Devils and Wild to no goals on two shots (both by New Jersey) in six minutes of power play ice time, but they allowed Tampa Bay three goals on four shots in 2:51 of power play ice time. 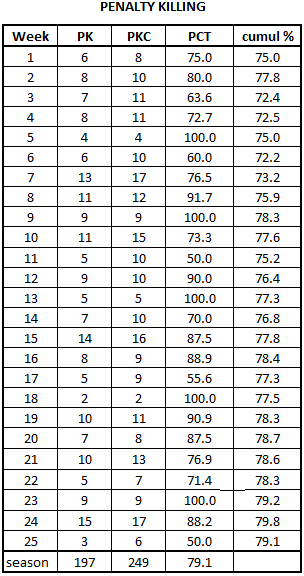 So close.  The Caps came within a single faceoff – the last one against the Wild in the last second of Friday’s contest, in fact – of being 50 percent for the week.  Odd thing about that; it was former Capital Eric Fehr who won the last three faceoffs of that contest that put the Caps underwater for the week.

However, the Week 25 results were built on performance in the neutral zone, where the Caps were 30-for-54 (55.6 percent).  They were 50.0 percent in the defensive end and 45.8 percent in the offensive zone.  The good thing there, though, if not the faceoff performance, was the faceoff volumes.  The Caps took 83 offensive zone draws for the week and only 44 faceoffs in the defensive end.

Individually, it was a good week for players taking at least ten draws.  Three of the five – Nicklas Backstrom, Lars Eller, and Nic Dowd – were 50 percent or better.  Only T.J. Oshie and Evgeny Kuznetsov won fewer than half of their draws. 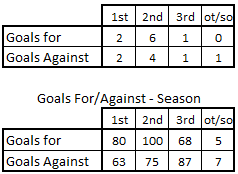 It was a deceptive week in that while the Caps won the second periods of games for the week, it was the four-goal second period against Tampa Bay that put them in a hole out of which they had to scramble to earn a standings point.  And, while they scored and allowed a single goal in the third period, it was that third period goal allowed that was the game-winner for the Wild in the Caps’ regulation loss for the week. 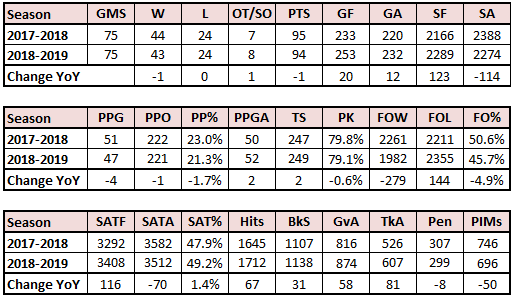 The loss to the Wild to close Week 25 caused the Caps to slip, ever so narrowly, behind the record of last year’s club, the difference through 75 games being a game won by last year’s club and an extra time loss by this year’s team to account for the one-point difference.  This club is better in other respects and rather significantly in a few.  For example, the Caps have an eight-goal improvement in goal differential, year-to-year (form plus-13 to plus-21).  They have a positive change in shot differential of plus-237, year-to-year (minus-222 to plus-15).  Shot attempts differential is plus-186 (from minus-290 to minus-104).

The Caps are going through a rough patch at the moment, 2-3-1 over their last six games and two straight weeks of treading water in standings points, and three of the last five weeks.  They have managed to avoid suffering outright losing weeks, running to eight the number of consecutive weeks without one.  It has been that ability to grind out points than has kept them ahead by a razor-thin margin in the Metropolitan Division.

That division lead will be challenged as the team head into the last two weeks of the regular season, the Caps having to contend with injury (Michal Kempny) and illness that seems to be running through the locker room.  But the schedule is unforgiving with a Sunday game against the desperate Philadelphia Flyers, a home-and-home with the surging Carolina Hurricanes, and the last game of the season series against Tampa Bay over the next four games.  Splitting the eight points available might not be the worst of outcomes, under the circumstances, but it might not be enough for the Caps to maintain their hold on the division lead.

Are you in financial crisis, looking for money to start your own business or to pay your bills?, Global Loan Access is given all types of loans at low interest rate of 2% I got mine from them you can Apply now via email at: ( globalloanaccess@gmail.com )