There are “passers,” and there are “playmakers.”  The former have little impact on the game, the latter are the difference between success and failure.  Nicklas Backstrom is, of course, a sublime passer, capable of threading pucks through defenders to a teammate no one saw or saucering a pass over a defender’s stick onto the blade of a teammate’s stick on a 2-on-1 for an easy goal.  But Backstrom is among the best playmakers of his generation.  He ranks fourth among active players in career assists, and of the 19 other players among the top 20 active players in assists, 17 of them came into the league before Backstrom did in the 2007-2008 season.  Only Sidney Crosby among active players has averaged more assists per game (0.817) than Backstrom (0.717).  He and Crosby are the only active players to have recorded at least 20 goals and at least 50 assists six times since Backstrom came into the league. 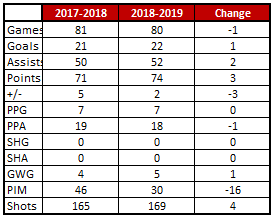 Fearless’ Take… But for Alex Ovechkin, the case could be made that Nicklas Backstrom is the greatest skater in Caps history.  His all-time franchise rankings would appear to bear that out.  Start with games played.  He finished the season with 895 career regular season games played, passing Dale Hunter for fifth place all-time and first among centers.  He finished the season with 231 goals, passing Mike Ridley for fourth place on the franchise list and first among centers.  He added to his top ranked all-time assist total, his 642 career assists ranking, as noted above, fourth among active players.  He passed Peter Bondra for second in points in franchise history (873).  His plus-120 is the best plus-minus ranking in team history.  Ovechkin is the only player within 100 of him (217) in career power play assists (284), and while he is in second place in career power play points (356) to Ovechkin (464), it is still 100 more career power play points than Peter Bondra in third place (256).  He even won 700 faceoffs this season, the fourth time he has won that many.  Only Adam Oates has more such seasons for the Caps (five).

Cheerless’ Take… Backstrom has a weird set of games that made up almost half his season.  After he had a hat tirck/four-point night against New Jersey on November 30th and followed that up with a goal against Anaheim in his next game, there was a 35-game stretch in which he had three goals, only one of those at even strength (although he did have 20 assists, 15 at even strength).  And the flip side of his all-time franchise ranking profile is how much the team depends on him to perform at that level.  Washington was 13-15-3 in the 31 games in which Backstrom did not record a point this season.

Over his first 23 games, Nicklas Backstrom had a typical “Backstrom” level of performance – six goals, 19 assists, three of the goals and nine of the assists coming on power plays.  He had six multi-point games in that start.  When he recorded a three-point game in a 5-3 win on November 26th over the New York Islanders in Brooklyn in his 24th game of the season, it was not surprising that all three points came on assists.  What would be surprising was what he followed that up with.

Returning home against the New Jersey Devils on November 30th, Backstrom opened the scoring on his second shift of the game, 3:51 into the contest, redirecting a centering feed from Alex Ovechkin through the legs of defenseman Sami Vatanen and over the right pad of goalie Keith Kinkaid.  The teams exchanged shorthanded goals in the second period, but Backstrom got on the score sheet once more, serving up an assist on an Andre Burakovsky goal that put the Caps up, 3-1, less than six minutes into the third period.  Five minutes later, Backstrom dialed his own number, taking the puck off the right wing wall, circling into the faceoff circle, and snapping a shot from the dot past Kinkaid to give him what would be his first multi-goal game of the season.  He was not done, though.  After Nico Hischier and Marcus Johansson scored to make it a one-goal game, and Alex Ovechkin provided some breathing room with an empty net goal with 90 seconds left, Backstrom closed the scoring with an empty netter of his own with 22.1 seconds left to complete the hat trick.  It was his second career regular season hat trick (he has a postseason hat trick), his first since he recorded one in a 4-2 win over the Tampa Bay Lightning on December 13, 2014.  It was his second four-point night of the season, the 22nd of his career, second on the team’s all-time list (Alex Ovechkin: 26).

It would be almost cliché to say games in Buffalo are not generally thought of as memorable, but Backstrom’s visit there on February 23rd was certainly one to forget.  Coming, as it did, as the last game of a six game road trip, the team’s longest of the season, it was even more forgettable.  He was on the ice for the Sabres’ first goal, just 3:40 into the game.  He was on the ice for the last goal, an empty netter in the last minute.  In between, he was on the ice for two of three Sabres’ goals, a total of four goals for which he was on-ice for the game in a 5-2 loss.  He also took a third period penalty for good measure.  He did all this in just 16:23 of ice time, his second-lowest ice time of the season.

Postseason… Nicklas Backstrom’s postseason was, well, odd.  On one level, he was beastly, leading the team in goals (five) and second in points (nine) in the seven-game series against Carolina.  He had 14 hits, fifth among forwards, and he won 52.7 percent of his faceoffs.  On the other hand, he was on ice for 11 of the 21 goals scored by the Hurricanes and was a team-worst minus-4, a minus-5 in the three road games in Carolina, minus-3 in what could have been a series-clinching game in Raleigh that the Caps lost, 5-2.  That road performance was especially striking when contrasted with his results on home ice.  In four games at Capital One Arena, Backstrom was 5-3-8, plus-1, with 13 shots on goal.  In three games in Carolina, he was 0-0-0, minus-5, with only five shots on goal.  He still managed to top the 100-point mark in his postseason career, the second Capital to do so in team history, his 106 points in the postseason trailing only Ovechkin (126).

Nicklas Backstrom has the sort of game that should age well.  He does not depend on straight-line speed, stick-handling, or power as much as he does vision, a deft passing touch, and guile.  He just completed his sixth straight 70-point season, one of only three players in the league to have six straight (Sidney Crosby, Tyler Seguin).  He is entering the last year on his current contract, and normally that would serve as motivation for a player who could find himself highly sought after as an unrestricted free agent.  It is difficult to think of Backstrom in another jersey, particularly when the player says, “[Washington is] all I know… It’s crazy, but at the same time, it’s a great feeling. I couldn’t ask for anything better from the fans or the city of Washington.”  In that respect, it is as much with expectation as hope that Backstrom and the club agree on an extension that keeps him here into the next decade, a player in whom one can have confidence that he will continue to be a durable, 70-point or more player.

At the highest level of examination, Nicklas Backstrom had a typical year, most notably averaging at or near a point per game over the course of the season.  However, drilling down it was a somewhat odd year.  His scoring consistency was not displayed as much on a game-to-game basis, as reflected in his ten-game segments, and his home-road split in the playoffs was not all that different than that in the regular season, just more pronounced.  And, while it was a typical Backstrom year in the final results, it was also, by his standards, rather middle of the road.  While he had his third highest career goal total (22, tied with his 2009-2009 season), his 52 assists were his seventh-highest in 12 seasons, his 74 points being sixth-most in his career, and his plus-2 rating his third worst.  His power play numbers were similarly unextraordinary by his standards, especially his assist total, the 18 power play assists being tied for third fewest in his career.

Nevertheless, that standard set by Backstrom is a high one indeed.  He in on a very short list of the best playmakers in the league over the last decade.  It is that which sets him apart as a special player, his on-ice vision being essential to his and the team’s success.  And it is the vision of Backstrom creating something from nothing – at least nothing the average player might see – that has been a pleasant vision for Caps fans for more than a decade.

I thought he was great all season.