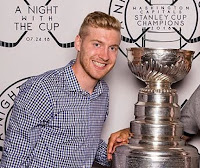 “He has the deed half done who has made a beginning.”
-- Horace

The 2011 NHL entry draft was equal parts odd and forgettable for the Washington Capitals, with one exception.  The Caps did not have a first round pick, that having been sent to the Chicago Blackhawks in a trade for Troy Brouwer.  Second rounder?  Nope.  That one went to the Carolina Hurricanes in a trade for Joe Corvo (the pick finally settled in Calgary after a couple of subsequent transactions).  Their third round pick went to the Florida Panthers in a trade for Dennis Wideman.

That left the Caps’ sixth round draft pick, Travis Boyd, the lone survivor of a four-pick draft.  Taken 177th overall in that 2011 draft, Boyd spent the next four seasons at the University of Minnesota before graduating the Hershey Bears in the AHL at the end of the 2014-2015 season.  Boyd spent the next two full seasons with the Bears before splitting his 2017-2018 season into 61 games with Hershey and eight with the Caps in his first NHL action.  He got into one game in the Caps’ Stanley Cup run, the Game 6 overtime win over Pittsburgh that clinched the Eastern Conference semi-final series over the Penguins.

Boyd started the 2018-2019 on the shelf with an injury suffered in a preseason game and got his first action of the year in Hershey on a conditioning assignment.  He debuted for the Caps in early November and did so in style, recording a pair of assists on first period goals in a 4-2 win over the Edmonton Oilers.

After missing the Caps’ first dozen games, Boyd dressed for 53 of the last 70 regular season games and was one of 15 Capitals to finish with 20 or more points (5-15-20).  He was the good luck charm that illustrates the benefits of secondary scoring.  Washington was 15-2-1 in the 18 games in which he recorded a point. 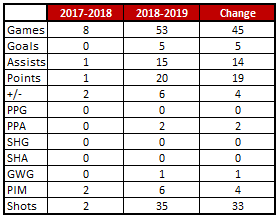 Fearless’ Take… Whatever becomes of Boyd’s career going forward, one can be impressed with its beginning for its doggedness.  Perhaps that is a product of the foundation he got coming up – two seasons with the USA Hockey National Team Development Program before he was drafted, four years at one of the top NCAA hockey programs, and three seasons with the Hershey Bears, the flagship franchise in the AHL.  That he finished with 20 points in 53 games (0.38 points per game, almost as many as Lars Eller (0.44) and more than Andre Burakovsky (0.33) was a bit of a surprise, given that he was not an elite scorer as an amateur.  There is some evidence that he might be a late bloomer in this area, given he averaged 20-43-63 per 82 games in his stay with the Hershey Bears.

Cheerless’ Take… He’s a nice story, but boy, he is swimming upstream against a powerful current of history.  Over 20 years ending with Boyd’s selection in 2011, the Caps had 18 sixth round draft picks.  He is one of only five to appear in an NHL game and one of only three to appear in an NHL game for the Caps (Mathieu Perreault appeared in 159 games for the Caps, and Garrett Mitchell dressed for one game in 2016-2017).  There is something to be said for the solid grounding he got in his development, but he still finished this season as a bubble player who dressed for only one postseason game.

Odd Boyd Fact… Travis Boyd was one of only three players in the league this season to record 20 or more points while averaging less than ten minutes of ice time per game.  Winnipeg’s Jack Roslovic was 9-15-24 while averaging 9:45 per game, and Los Angeles’ Austin Wagner was 12-9-21 while averaging 8:56 per game.

After missing the Caps’ first dozen games of the season, Travis Boyd played through his first dozen games of the season in solid fashion, averaging half a point per game, a respectable number for a fourth liner getting ten minutes a game.  However, all six points he had came on assists.  In his 13th game of the season, in Columbus against the Blue Jackets, he recorded a first period assist on a Dmitrij Jaskin goal to give the Caps a 2-0 lead in that contest.  Alex Ovechkin tallied with less than a minute in the first period to give the Caps a 3-0 lead.  When the Caps held onto that lead going into the third period, the competitive portion of the game appeared over, and the object was to play smart, minimize risks, and play responsibly, common ingredients in a recipe for road success.

But there was still time for a moment, and what a moment it was for Boyd.  Alex Ovechkin gathered up a loose puck at the Columbus blue line and circled into the zone on a 2-on-1 with Boyd.  From the left wing circle, Ovechkin slid a pass under defenseman Seth Jones’ stick and onto the tape of Boyd’s stick.  Boyd wasted no time in snapping a shot past the outstretched glove of goalie Sergei Bobrovsky to record his first NHL goal.  A first goal coming off a pass from a former Calder/Hart/Ross/Lindsay/Richard/Smythe Trophy winner and beating a former Vezina Trophy winner.  It hardly gets more memorable than that.

If it was a statement game to be played against the league’s top team in the regular season, the Caps delivered an emphatic statement to the Tampa Bay Lightning on their own ice sheet in late March.  The Caps scored three first period goals, held a 4-0 lead after less than 28 minutes, and withstood a brief Lightning rally before closing out a 6-3 win.  Stars were stars for the Caps with Alex Ovechkin, Nicklas Backstrom, and T.J. Oshie each recording a pair of goals.  Travis Boyd’s record of the game barely registered.  In just over six minutes of ice time, his lowest ice time of the season, he did not record a shot attempt, had only one mark on his score sheet (a takeaway), and was a minus-1.  Winning makes everyone feel good, but it feels better when one has made bigger contributions to the effort.  For Boyd, who skated a team low 12 shifts, it was a night with little to remember.

Travis Boyd is entering the last year of a two-year contract that carries an $800,000 cap hit.  He will be an arbitration-eligible restricted free agent at the end of the season.  How he begins the season will be more a product of what happens with other players, who the Caps are inclined and/or are able to resign from among their nine restricted and unrestricted free agents.  That he played in 16 of 19 games after the trading deadline and went 1-3-4 while averaging just 8:36 in ice time, and that he followed that up with only one postseason game suggests he is on the bubble as a regular next season or even a roster player.

That the Caps have seven restricted and unrestricted free agents among the forwards hints at the potential for opportunity for a player to break through.  One would normally consider that a player such as Boyd would face some pressure from players rising from Hershey, but the likely suspects there – Nathan Walker and Riley Barber – are Group 6 unrestricted free agents, and Liam O’Brien is an arbitration-eligible restricted free agent going into this off-season.  Since the Caps are at the 50-contact limit (source: capfriendly.com ) with some expected churn within that number, Boyd might be in a unique position to be standing on the ice on Opening Night for the Caps when the dust settles.

Travis Boyd had a nice rookie season.  He finished in the top-25 among rookie point-getters despite only Los Angeles’ Austin Wagner averaging less ice time in that group (8:56) than Boyd (9:50).  The question hovering over Boyd going into next season will be whether his improvement in scoring output in the AHL and his respectable rookie season indicate an upside that is only beginning to be tapped, or if he is at or near his performance plateau, given that he will turn 26 years of age in training camp.  Still, looking at the 2018-2019 season, the injured start, and the role he was asked to play, it was a good season for the rookie.