“Luck is not chance, it's toil; fortune's expensive smile is earned.”
-- Emily Dickinson

If you are going to have a career year, it is best to have it in the last year of a contract before embarking on free agency.  It worked for Washington Capitals defenseman John Carlson last season, when he parlayed a career year into an eight-year/$64 million contract.  While he will not earn quite the payday that Carlson earned last summer, Brett Connolly is poised to see the career year he had in 2018-2019 be converted into a handsome contract of his own.

It did not start out that way as Connolly started his eighth NHL season.  Coming off consecutive 15-goal seasons with the Capitals, both career highs for him, he played through his first five ten-game segments – 50 games played – with nine goals, another 15-goal pace.  He ramped up his production in a big way over his last three segments, though.  Connolly wrapped up the season with 13 goals in his last 31 games over those segments, a 34-goals per 82 games pace.

It was a career year for Connolly in goals (22), assists (24), and points (46), but it was a career year in other respects, too.  He dressed for 81 games, topping his previous high of 71 games with Boston in 2015-2016. His five game-winning goals were a career best, surpassing the three he had in his first year with the Caps in 2016-2017.  He also displayed a new-found assertiveness reflected in his shot total.  The 139 shots on goal he posted was not only a career best, it was the first time he topped 100 shots for a season, and his 1.72 shots per game was more than one-third more than his career average before this season (1.28). 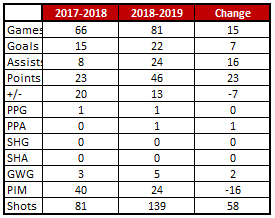 Fearless’ Take… That Brett Connolly topped the 20-goal mark for the first time in his career is not the odd part of his season, but perhaps that he took as long as he did to get there.  This is a player who recorded 86 goals in 144 games in junior hockey, nine goals in 23 games in international tournament play, and 52 goals in 137 games in the AHL.  But there was an odd consistency in his early career.  In 201 games covering seven seasons with Tampa Bay and Boston, Connolly had 39 goals – a 15-goals per 82 games pace.  He scored precisely 15 goals in each of his first two seasons in Washington, but at a somewhat higher pace (18 goals per 82 games).  That he should make the leap to 22 goals might seem like a lot, but it appears more of a progression than a quantum leap when looked at in terms of goals per game.  That suggests that this season is not an aberration, but the maturity of a goal scorer who had a well-defined role and a career high in games played (81) to play it.

Odd Connolly Fact… Brett Connolly had eight games this season in which he recorded a goal on his only shot on goal.  Only Dallas’ Cody Eakin had more such instances (nine).  In his three seasons as a Capital, no player in the league has had more one-shot/one-goal games than Connolly (24).  J.T. Miller is second with 16 such games.  And, those games have been good indicators of success, the Caps posting a 19-2-3 record in those 24 games.

When the Caps opened their next to last road trip of the season, they were packing a seven-game winning streak into their baggage.  However, they dropped a 5-3 decision in Pittsburgh to the Penguins to open their trip in what was a frustrating night for Connolly – no points and four shots on goal in just over 13 minutes of ice time.  A trip to Philadelphia two nights later would normally seem like a stiff test after such a loss, but the Caps had already taken two decisions from the Flyers this season.  In their second and final trip to Philadelphia this season, Connolly got the Caps on the right side of things early.  After an attempted keep-in by John Carlson of a fluttering puck dribbled to Michal Kempny just inside the blue line, Kempny sent a slap pass to Connolly just off the post to the right of goalie Carter Hart.  Connolly settled the puck and whipped it past the right skate of Hart to give the Caps a 1-0 lead just 2:52 into the contest.

The Caps took a 2-0 lead before the first intermission on a Lars Eller goal, Connolly recording the primary assist, but the Flyers halved the deficit barely a minute into the second period on a James van Riemsdyk goal.  Connolly restored the two-goal lead mid-way through the frame when he stripped Travis Sanheim of the puck at the Caps’ blue line, skated down the left wing accompanied by Carl Hagelin on his right.  As he got to the left wing circle he ripped a shot that sailed past Hart’s glove on the far side to make it 3-1 at the 8:43 mark.  It would be the game-winning goal in the Caps’ 5-2 win, his fourth of five game-winning goals this season, and his second three-point game of the year.

Trips to Toronto are occasions for great anticipation by players.  And Toronto has become a difficult place for visitors with the Maple Leafs’ improvements over the last several years.  Compounding the problem for the Caps was that they would be playing the back half of a back-to-back set of games and doing so against a supercharged offense in the Maple Leafs.  The Caps got out to a lead late in the first period on a Nicklas Backstrom goal but surrendered the lead with less than a minute in the period.  Washington grabbed the lead again early in the second on a goal by Alex Ovechkin, but there the game took a turn.  Toronto scored four straight goals on their way to a 6-3 win.  It was a forgettable night for Connolly, who did not record a point, managed a single shot on goal, two shot attempts, and had a takeaway for his 12:44 in ice time.  He also finished minus-3 for the evening, his worst plus-minus rating of the season and only the second time as a Capital that he finished minus-3 (February 17, 2018 at Chicago in a 7-1 loss).

Postseason… Like his teammates, Connolly’s postseason breaks into home and road pieces, but perhaps not quite as cleanly as some of those teammates.  In four home games he was 1-0-1, plus-1, with seven shots on goal.  In three road games, Connolly was 1-0-1, minus-3, with two shots on goal.  His nine shots in seven games made his 2018 performance on the way to a Stanley Cup look like the outlier.  He had 32 shots in 24 games last spring (six goals), which was quite different from this spring’s effort and that of his first career trip to the postseason, with the Caps in 2017, when he managed only six shots on goal in seven games without recording a goal.

Brett Connolly is in an enviable place.  And then again, he is not.  The enviable part is that he had a career season as he enters his prime performance and earning years (he will turn 27 years of age on May 2nd).  His current two-year/$3.0 million contract is expiring, and he will be due a big raise.  Looking at comparable right wings at capfriendly.com (24-30 years of age, 15-25 goals, 40-50 points this season), it would seem unlikely he would command the same money as Brandon Saad ($6.0 million cap hit) or even Tom Wilson ($5.167 million cap hit), but a contract at or north of $4.0 million per year hardly seems out of the question for a 27-year old right wing who can post 20-25 goals and has a Stanley Cup on his resume.

Where one does not envy Connolly is in facing the difficult decision between maximizing his earning potential and staying in a town and a team with which he fits, even if that team almost certainly cannot afford what other teams could offer.  Players dream about being in a position to use a career year to make a leap in earnings. Last year it worked for John Carlson and the Capitals, and made fans happy when he inked a long-term extension with the club.  Given all the decisions the Caps have to make about players this year and next,  it might be a bit too much to expect them to go two-for-two in re-signing a player coming off a career year.  This could come down to which player they want to pay $4 million, Carl Hagelin, who is more versatile, but who has never had a 20-goal year in eight seasons and is almost four years older than Connolly, or Connolly, the more productive offensive player, if somewhat limited to that role

It took some time, but Brett Connolly re-engineered his game, from a top-ten draft pick expected to provide powerful scoring punch (a role in which he disappointed two teams) to a third-liner who can provide scoring production not usually seen from that layer of forwards.  He has paired well with Lars Eller over the last two seasons to make the Caps’ third line an important ingredient in their success.  But nothing lasts forever, especially in hockey, where circumstance and financial considerations make for constant and frequent player turnover.  The term “cap casualty” might be attached to Connolly this summer, but if it comes to pass, it is because his performance and contributions to the team’s success over the last three years made it so.  And fans should be happy with that.

Not understanding why you consider the 2017-18 playoffs an outlier for Connolly. His production based on shots per game and goals per game is almost identical in the last two playoffs.