“The variety of all things forms a pleasure.”
-- Euripides

Lars Eller is a metronome.  He shows up every night (he has missed only 26 games in ten full NHL seasons), he produces with consistency (posting between 12 and 18 goals in his last seven 82-game seasons), he has improved his point production (three straight years topping 35 points), his possession metrics has been on the good side of 50 percent (three of four years in Washington with his shot attempts-for percentage at 5-on-5 over 50 percent).

But despite his being something of a metronome statistically, and being consistent in production over years and games, there is an underlying variety in his game of value to the Caps.  Eller, whose role is that of center on the third line, has displayed an ability to move up a line when the circumstances require it.  This season, when Nicklas Backstrom missed eight games in late November/early December, Eller filled in with capable production (1-3-4, plus-5), and the Caps went 6-1-1.  When Evgeny Kuznetsov opened the season on the bench serving a suspension, Eller went 0-3-3, plus-2, and the Caps were 2-0-1.  When Kuznetsov missed another three games in mid-February, the Caps went 1-2-0, but Eller still chipped in with a pair of assists, those coming on the game-tying and game-winning goals in the third period of a 3-2 win in Colorado over the Avalanche. 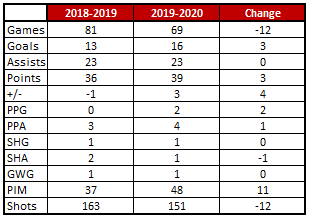 We have heard it before, and we have heard it often.  Secondary scoring matters.  Lars Eller posted points in 32 games this season, and the Caps were 21-8-3 in those contests.  They were 20-12-5 in those games in which he did not have a point.

Eller was a reliable contributor on the road this season for the Caps.  In 36 games away from Capital One Arena, he posted 22 points, and he was fourth on the team in assists on the road (16).  He was also fifth on the club in shots on goal in road games (82), more than T.J. Oshie (69), Nicklas Backstrom (67), and Evgeny Kuznetsov (55).

Secondary scoring matters, but the Caps weren’t so hot when Eller posted goals, just 8-6-1 in the 15 games in which he had a goal.  And cuz, Eller was a coloring a little outside the lines in those road games, too.  He was second on the team in penalty minutes in road games (28), trailing only Tom Wilson (50).  He kind of fizzled at the end of the regular season, too, going just 2-2-4, even, in his last 12 games.

Odd Eller Fact…Lars Eller has been with the Caps for four seasons.  Over that time, he and Jakub Vrana are the only current Capitals to average at least 0.44 points per game while averaging less than 16 minutes of ice time per night in at least 100 games played.

Odd Eller Fact II… Eller and Tom Wilson were the only forwards on the team this season to average at least one minute of power play time and at least two minutes of shorthanded ice time per game.

Game to Remember… October 2, 2019.  Opening Night is a big night on the hockey calendar for any player, and when it offers the opportunity to reach a milestone, it might be a bit bigger deal.  That was the case for Lars Eller when the Caps opened the season in St. Louis last October.  The Blues got off to a 2-0 lead less than eight minutes into the game, making fans watching the defending Stanley Cup champs begin their defense of their championship.  The Caps started mounting a comeback late in the period, though.  Eller got the play started, taking a pass at the Caps’ blue line and getting it into the neutral zone before sliding it off to John Carlson skating through the middle.  Carlson got to the St. Louis blue line before dishing it off to Alex Ovechkin on his right.  Ovechkin stepped up between two Blues defenders and snapped a shot past the blocker of goalie Jordan Binnington at the 15:37 mark of the first period.  Eller was credited with an assist, his 100th point as a Capital.  He was not yet done, though.  Mid-way through the second period on a power play, Eller won a draw back to Nick Jensen at the left point.  Jensen fed the puck across to Dmitry Orlov for a one-timer that sailed over Binnington’s glove to tie the game.  The Caps went on to spoil the opener for the Blues on a Jakub Vrana goal in overtime, 3-2.  It was the first of seven multi-point games for Eller this season.

Game to Forget… December 28, 2019.  The Caps’ last road game of the 2019 portion of the season was in Carolina, to face the team that eliminated them from the playoffs the previous spring.  It was a trip best forgotten.  The Caps were behind the eight-ball all night.  Carolina opened the scoring mid-way through the first period and added a goal eight second into the second period. The Caps worked their way back into the game, sandwiching a pair of goals around a Carolina tally to make it 3-2, Hurricanes, ten minutes into the second period.  Things got worse for the Caps, and specifically Eller, from there forward.  Carolina scored another three goals, Eller on ice for each of them, and not even a cosmetic late goal from Richard Panik could pretty up this affair as the Caps lost, 6-4.  Eller did record an assist in the game, but he finished with his only minus-3 rating of the season.

The postseason was, on a meaningful level, a happy time for Lars Eller.  He celebrated the birth of his second child.  What that meant for the hockey side of things is that he missed the last three round-robin game and Game 1 of the opening round of the playoffs against the New York Islanders.  The other five games were not among the best on Eller’s resume.  He recorded an assist in the Caps’ 3-2 Gimmick loss to Tampa Bay Lightning in the opener of the round-robin, before he departed, and when he came back he would be held without a point over the last four games of the Islanders series.  Over the five games Eller went 0-1-1, minus-5 (minus-4 in Game 2 against New York).

Eller just completed the second year of a five-year/$17.5 million contract that extends through the 2022-2023 season.  There are 20 active centers with cap hits between $3.0 and $4.0 million (capfriendly.com), and Eller compares favorably with all of them.  His price certainty over the next three seasons allows the Caps to focus on other areas of concern, and since he will be only 34 when his current deal expires, the Caps could reasonably expect his current level of production to continue.

Lars Eller might not be the “core” player that Alex Ovechkin, Nicklas Backstrom, and John Carlson are, but he has been, is, and is likely to continue being an important ingredient in whatever success the Caps have.  He plays well in all three zones, can chip in on both sides of special teams, can play a top-six role when circumstances require it, and generally plays at a consistent level.  Variety describes his style, while being a consistent producer.  He is the kind of player that a coach need not expend a lot of concern over.  It is a valuable trait in a player, and one often underappreciated.