Descriptions of Washington Capitals forward Garnet Hathaway paint a picture.  The scouting report at TSN.ca says… “Owns excellent size and the prototypical NHL-style game for the highest level, so he is capable of winning board battles with consistency. Gets under opponents' skin, too.”

Teammate Jakub Vrana said… “He makes you want to fight for your teammate, and he is with us there on the ice.  He brings more respect on the ice. People just don’t go running into him.”

Hathaway has carved out a five-year career as a typical member of the “grinder” fraternity of forward that relies on consistency of effort, high energy, and a physical edge as his means of contributing to a team’s success.  He just completed his first season with the Caps after signing with the club as a free agent, and his high-end numbers largely tracked (and even improved) with the per-82 game numbers he posted in four seasons with the Calgary Flames: 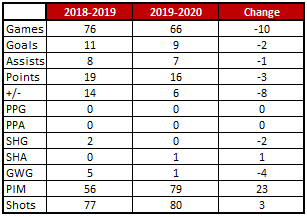 Hathaway’s offensive numbers fell apart in the 2019 portion of the season.  He was 6-6-12, plus-6, over his first 37 games, ending on December 28th.  Starting with New Year’s Eve, he went 22 games without a point with a minus-4 rating, and he was 3-1-4, even, over his last 29 games of the regular season.  And while bottom six forwards do not generally get a lot of ice time, less was less with Hathaway.  The Caps were 5-6-1 in the 12 games in which he skated less than nine minutes.

Odd Hathaway Fact… Garnet Hathaway was one of 14 players in the NHL this season to record a point in a game while being charged with at least 15 penalty minutes.  That occurred on November 18th versus Anaheim – 15 PIMs and an assist in a 5-2 win over the Ducks.  The 10-minute misconduct he earned in that game – spitting on Erik Gudbranson – earned him a three-game suspension. He was the first Capitals to do so since Tom Wilson did it in March 2015 against Columbus.

Odd Hathaway Fact II… Garnet Hathaway is the only player in Caps history raised in Maine.

Game to Remember… December 3, 2019.  When the 2019 calendar flipped over from November to December this past season, Garnet Hathaway was carrying a 16-game streak without a goal.  It took less than 14 minutes for Hathaway to end that streak when the Caps visited San Jose to take on the Sharks.  San Jose opened the scoring less than three minutes into the game, but Hathaway tied it ten minutes later.  Off a faceoff in the San Jose end, Hathaway and Nic Dowd fished out a loose puck along the left wing boards, Dowd eventually controlling it and sending it out to John Carlson at the blue line while Hathaway made a bee line for the net.  Carlson stepped up and fired a shot that Hathaway got a piece of it as it was sailing by at the top of the crease, beating goalie Martin Jones at the 13:31 mark.

The goals set off a five-goal run by the Caps that extended deep into the second period.  Hathaway got the fourth goal, less than three minutes into the second period.  That one was the product of a relentless forecheck that wouldn’t allow the Sharks to exit their zone.  It bore fruit when Nic Dowd poked the puck off the stick of Radek Simek and settled it in the right wing faceoff circle.  He spied Hathaway darting down the middle and fed him the puck between the hash marks.  Hathaway snapped a shot that Jones got a piece of, but not enough.  The puck trickled under Jones, and Hathaway poked it in as he was being taken to the ice by Simek, making it a 4-1 game 2:31 into the second period.  was Hathaway’s  only two-goal game of the season.

Game to Forget… March 1, 2020.  When the Caps visited the Minnesota Wild to open March, Hathaway was in the midst of a dry run of production on the road.  He was without a point in ten straight road games dating back to January 3rd.  The contest against the Wild would make it 11.  The Caps won the contest, 4-3, but it was a quiet night for Hathaway by his standards.  He skated only nine shifts (three in each period) and 7:13 of ice time (his lowest of the season), posting two shots, a blocked shot, no hits (one of only four games all season he was blanked in that column), took a roughing penalty and finished with a minus-1 rating.

It is a continuing refrain; the Caps just did not get much production from the bottom six forwards, and Garnet Hathaway was no exception.  Eight games, no points, minus-3, five shots on goal, averaging just over ten minutes a game.  There were the 12 penalty minutes and the 21 credited hits, though.  The unsettling part is that Hathaway is now without a point in 13 career postseason games.  He (and other bottom six forwards) don’t have to light up the scoreboard, but some contributions are important to success.

Garnet Hathaway just completed the first year of a four-year/$6.0 million deal.  It is hardly a budget-buster, and given his mix of skills seems quite reasonable, keeping him in the Caps’ fold until he reaches age 31.  He is a high-effort, high-energy player of a type that complements the skill at other positions that the Caps have.  This should not be a position of much worry for the club moving forward.

There were few surprises in Garnet Hathaway’s game in his first year with the Caps.  A player of his type can win over fans with consistent and reliable effort, standing up for teammates, and making life miserable for opponents.  In that regard, Hathaway was a player who met expectations.  Now, if there are fewer expectorations and a little more postseason production, he will player hard to beat.