The Washington Capitals head to New England for games on Wednesday and Friday against the Boston Bruins at TD Garden. The Caps face the Bruins on a five-game points streak (4-0-1), while the Bruins go into the two-game set with a 2-4-0 record over their last six games that dropped them into second place in the East Division behind the Capitals.

He leads the team in most offensive categories: goals (10), assists (13), points (23), plus-minus (plus-8), even strength points (14).  And, if there was a post-season award for “most offensive player,” he would win in a walk.  Nevertheless, as he approaches his 33rd birthday, Brad Marchand is arguably the most valuable Bruin.  Marchand, whose ability to get under the skin of opponents without much consequence (or at least as much as opponents and their fans believe he deserves) is perhaps unmatched in the NHL (he is tied with three teammates for seventh in penalty minutes with ten), is a very prolific contributor on offense.  He has more than 20 goals in each of his nine full seasons in Boston (he had 18 in the abbreviated 2012-2013 season and none in 20 games of his rookie season).  He has a 100-point season on his resume (exactly that number in 2018-2019) and three other seasons of at least 85 points.

Boston is, at least this season, a team that lets the forwards do the heavy lifting for goal scoring.  Ten defensemen have dressed for Boston this season, and nine of them have points and have combined for 32 assists).  But only two of those ten have goals – Charlie McAvoy (tree) and Brandon Carlo (two).  McAvoy is growing into the number one defenseman role for the Bruins, but Carlo is an interesting subject in his own right.  Now in his fifth NHL season, he has not demonstrated the ability to be a difference maker in the offensive end of the ice; his career high in points is 19 (in 67 games last season).  This season he is on a pace to pass his career high in goals (six in his rookie season), but he is doing it with shooting that might not be sustainable.  His shots on goal are down (over 1.60 per game in the previous two seasons to 1.37 per game this season), but his efficiency is up – 7.7 percent, almost a full percentage point better than his career high (6.8 percent in his rookie year) and more than twice that of his career shooting percentage (3.4 percent).  He does seem to have hit a wall lighting the lamp.  Carlo is without a point in ten straight games (0-0-0, minus-3).  He is 1-1-2, minus-3, in 14 career games against Washington. 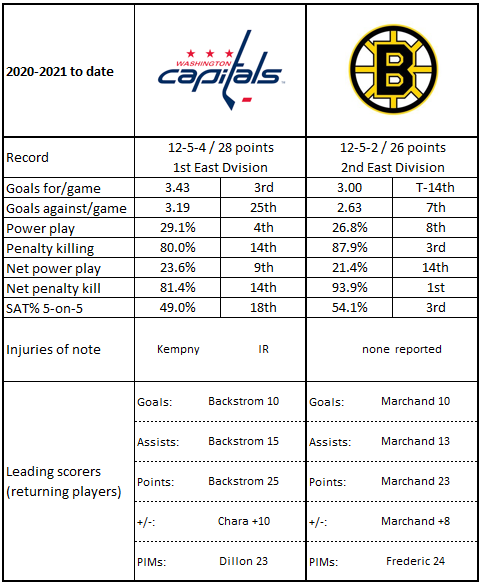 1.  Boston leads the league in scoring offense on home ice (4.22 goals per game), although the Bruins have played fewer home games (six) than every other team except San Jose (five).

2.  Their ability to score at home is influenced by their power play, also best in the league on home ice (50.0 percent).

3.  The Bruins have not been out-shot on home ice this season.

5.  Three of Boston’s five wins on home ice have come by three or more goals.

4.  Washington is undefeated on the road when leading after two periods (5-0-0).

5.  Nineteen of 22 skaters dressing in road games for the Caps have at least one point. Nineteen have a plus-minus of even or better.

With apologies to Auston Matthews and his fans, David Pastrnak can make a claim to being the heir apparent to Alex Ovechkin as the leagues dominant goal-scorer.  Why?  Consistency.  Pastrnak is one of two players who, over the four seasons preceding this one, posted at least 34 goals per season (yes, Matthews is the other). Matthews and Pastrnak rank second and third, respectively (behind Ovechkin) over that period with 176 and 164 goals, respectively.  Pastrnak’s NHL career has been one of consistent improvement in goal scoring.  He recorded ten in 46 games in his 2014-2015 rookie season and followe that up with seasons of 15, 34, 35, 38, and 48 goals last season when he shared the Maurice “Rocket” Richard Trophy with Ovechkin as the league’s top goal scorer and was name for the first time in his career to the NHL first All-Star Team at right wing.  While his shooting efficiency has not been quite the unbroken path of progress his goal totals have been, it has improved consistently from 10.8 percent in his rookie season to 17.2 percent this season.  And, his shot volumes are starting to approach Ovechkin levels.  This season, his 4.08 shots per game are more than twice that of his rookie season (2.02).  What he has lacked this season is consistency, but he has balanced this with explosiveness.  Although he has nine goals in 12 games, he is without a goal in eight of those 12 games.  However, his has three multi-goal games, including two hat tricks, both against Philadelphia – one in a 4-3 overtime win on February 3rd, and the other in a 7-3 win on February 21st.  Pastrnak is 7-9-16, minus-7, in 17 career games against Washington.

An appropriate question at this point in the season regarding Zdeno Chara as a Capital might be, “how do you like me so far?”  The difficulty in answering this question is that the view might be influenced by the knowledge that Chara already has his Hall of Fame ticket punched and using that as a standard to evaluate him.  But how would that view change if you took the name plate off the back of his jersey and set aside his imposing physical presence on the ice (a 6’9” defenseman)?

He is one of three Capitals defensemen of eight to dress to have played in all 21 games to date, he is tied with Justin Schultz for second place among defensemen in goals scored (two apiece), his 19:24 in ice time per game trails only that of John Carlson (24:23), his 31 credited hits trail only Brenden Dillon (46), he is tied with Carlson for second place in blocked shots, and his plus-10 rating is best among all skaters regardless of position.  Heave ice time loads have not made him a liability on the ice, the Caps posting a 5-2-1 record in the eight games in which he logged at least 20 minutes.  Nevertheless, Chara will turn 44 years of age on March 18th, the oldest skater in the NHL.  Perhaps in acknowledgment of this fact, or the Caps back at full strength, his ice time has been pared back in subtle fashion; he has not logged 20 minutes in any game since Game 11 against the New York Rangers.  Since then, Chara has averaged 18:12 per game in ten games.  And, he had a very quiet game in the Caps last contest, a 3-2 win over New Jersey on Sunday – 18:29 in ice time, no points, even, one blocked shot, no credited hits.  Whether he will require a night off here or there down the stretch is a possibility, but for now, not overworking him seems to be the plan of action.  Chara is 8-6-14, minus-1, in 37 career games against Boston.

The East Division is in a mud fight for control, even if it has been largely these two teams fighting it out for the top spot over the course of the first 20 or so games.  What advantage the Caps have here is history.  Since the 2009-2009 season, Washington is 30-10-2 against Boston and is 14-5-1 against the Bruins in Boston over that span of time.  Boston has made things more of a contest recently, the Caps overall edge just 5-3-0 since the 2018-2019 season and 2-1-0 in Boston.  This should be a good indicator of where this year’s versions of these team stand against one another, this time as division rivals.