The Washington Capitals have had uninterrupted success against the New Jersey Devils the season.  After winning the first four meetings between the clubs to date, the Caps get a chance to add a pair of victories on Thursday and Friday when the Devils visit Capital One Arena.  Despite losing to the New York Rangers in their last outing, the Caps go into this two-game set with seven wins in their last eight games and a 14-3-1 record since February 16th, their .806 points percentage tied with the Tampa Bay Lightning for best in the league over that span.  On the other side, the Devils arrive in Washington with a more modest four wins in five games, but it is a considerable improvement over the previous 14 games, over which they went 2-10-2.

An important ingredient in that recent success for the Devils has been goaltending.  Scott Wedgewood is 1-1-0, 2.56, .930,and his are the inferior numbers between the two New Jersey netminders.  Mackenzie Blackwood is 3-0-0, 1.97, .942 in his three appearances over those five games.  That .942 save percentage is the fifth-best in the league among 24 goalies logging at least 120 minutes over that span, and his .941 even strength save percentage is also fifth-best in the league among 13 goalies appearing in at least three games.  Blackwood’s three straight wins follow a ghastly nine-game stretch over which he went 1-8-0, 3.84, .866, and in all of those games he allowed three or more goals.  He allowed a total of only six goals in his three-game win streak.  Balckwood is 0-2-0, 3.58, .848 in two appearances against the Caps this season, 1-5-0, 3.48, .878 in six career appearances against Washington.

Back to Wedgewood, he has had an odd run of late.  Half of his last six appearances have gone to extra time, all of them losses, Gimmick losses to Buffalo and the New York Islanders and a 5-3 overtime loss to the Caps on March 9th, his only appearance against the Caps so far this season.  Another odd part of his record to date is that he does not get much in terms of goal support.  In ten appearances this season he is 0-4-2 when allowing three of more goals, 3-0-1 when allowing two or fewer.  In four career games against the Caps, Wedgewood is 1-0-3, 2.63, .903.

It is not as if the Devils have burned out goal lamps over their recent 4-1-0 run.  They have 13 goals over those five games, and no skater has more than two.  However, four of the nine skaters with goals over this stretch have a pair – Travis Zajac, Yegor Sharangovich, Sami Vatanen, and Kyle Palmieri.  Now in his 11th season but still just 30 years old, Palmieri has emerged as a potential trade asset as the Devils look to be sellers more than buyers as the trading deadline approaches.  Palmieri is in the last year of a five-year/$23.35 million contract with New Jersey.  He has been a very reliable point producer in recent seasons.  Since being traded to the Devils from Anaheim for a pair of draft picks I June 2015, he has posted more than 50 points in three of five seasons preceding this one and has averaged 56 points per 82 games over that period.  His points are down a bit on a per game basis so far this season, but his 15 points in 29 games is still tied for fourth on the team, and his five power play points is tied with P.K. Subban for the team lead.  Palmieri has a pair of assists in four games against the Caps this season and is 6-7-13, minus-2, in 25 career games against Washington. 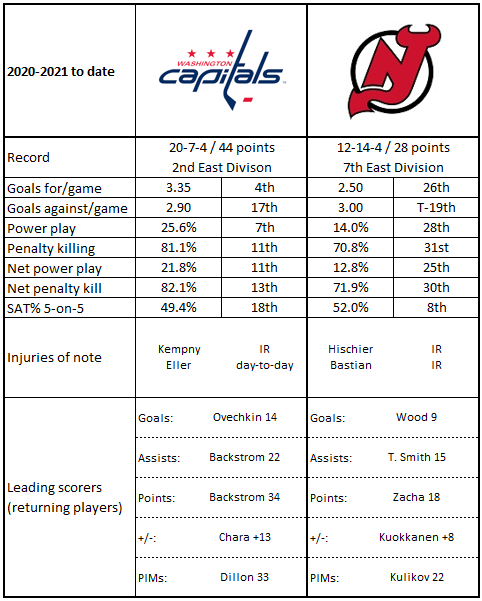 4.  New Jersey does itself no favors early in games on the road on offense.  The six first period goals they scored so far this season is second-fewest in the league (Dallas: 5).  On the other hand, only four teams have allowed fewer goals on the road in the first period than the eight allowed by the Devils (Anaheim: 7; Arizona: 7; Vegas: 6; Colorado: 5)

5.  The Devils have eight road wins this season.  Six of them were by one goal, three of those in extra time.

1.  Only Vegas has more one-goal wins on home ice this season (seven) than the Caps (six).  They are one of only three teams in the league without a one-goal loss in regulation at home (Tampa Bay and Carolina are the others).

2.  Washington has almost as many goals scored in the second period of games on home ice (24) as total goals in the first and third periods combined (26).

5.  It would not surprise any Caps fans that neither Brenden Dillon or Nick Jensen have a goal scored on home ice this season.  It might surprise more people that Evgeny Kuznetsov doesn’t have one, either.

Over the Devils’ recent 4-1-0 run, Jesper Bratt and Travis Zajac lead the team with five points apiece.  For Bratt, who will carry a five-game points streak into the game against Washington on Thursday, it is part of a streaky season to date.  After starting the season without a point in his firat two games, Bratt peeled off a four-game points streak (all assists).  He followed that with just two points in his next seven games, but over his last 11 games he is 1-8-9, even.

What has been missing most from Bratt’s game so far this season is goal scoring.  After posting a career high 16 goals in 60 games last season with a 15.8 shooting percentage (also a career high), Bratt has only two goals on 54 shots (3.7 percent) in 24 games this season.  His point production, whether scoring goals himself or assisting on them, matter, especially to a team that does not have elite scoring elsewhere in the lineup.  The Devils are 8-4-1 in the 13 games in which he has a point, 1-8-2 in 11 games in which he does not.  There is also his offensive engagement generally.  New Jersey is 4-9-1 in 14 games in which he recorded two or fewer shots on goal, 5-3-2 in the ten games in which he had three or more shots on goal.  Bratt is 0-1-1, minus-1, in four games against the Caps this season, 1-2-3, even, in 13 career games against Washington.

He has no chance to catch Michal Neuvirth for the team record in wins in a season by a rookie goaltender (27), but Vitek Vanecek could become only the third rookie netminder in Caps history to hit the 20-win mark (Bob Mason had 20 in 1986-1987).  With 13 wins in 22 games, the biggest factor that would prevent him in reaching that goal is Ilya Samsonov appearing to re-establish himself as the number one goalie after Vanecek shouldered the load when Samsonov was laid up with COVID earlier in the season.

If anything, Vanecek’s performance is improving.  He started the season with a seven-game unbeaten streak, but he followed that up with a four-game losing streak.  Over the 11 games overall he was 5-3-2, 3.26, .901.  Since then, he is 8-2-1, 2.06, .923, with one shutout.  The eight wins are tied for seventh in the league over that span.  Of 41 goalies logging at least 400 minutes over that period, his 2.06 goals against average ranks seventh, and his .923 save percentage ranks 12th.  Among rookies over that same period, he ranks tied for second in wins (Kaapo Kahkonen: 9), fourth in goals against average, and fourth in save percentage.  Vanecek is 2-0-0, 2.97, .891 in his two appearances to date against New Jersey.

If history is a guide here, you would think this could get ugly for the Devils, based on special teams.  The Caps are 4-for-6 in two games against an historically bad penalty kill on the road.  Two of the four power play goals scored by the Caps came in the first 30 seconds of a man advantage, one of them just seven seconds in.