The Washington Capitals spent Week 8 marching up the east coast in the middle of their five-game road trip.  On balance, it was a decent week, win-loss wise, but it ended with a bad taste in their mouths, courtesy of the Boston Bruins, a taste that might have been rancid New England clam chowder. 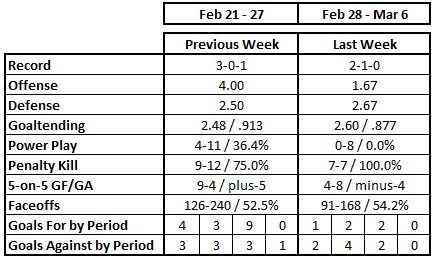 Washington wrapped up their two-game visit to New Jersey with a 3-2 win to open the week.  It would be harsh to say that things deteriorated from there, especially in closing the week with a pair against a strong Boston Bruins club.  Nevertheless, the Caps slipped a bit as the week wore on, earning a win in a hard-fought contest over the Bruins that was decided in the Gimmick, 2-1, and then dropping an ugly 5-1 decision to the B’s in the rematch on Friday. Their largest loss margin in any game this season.  At week’s end, though, the Caps had a 6-3-2 road record overall, the second-best road record in the East to Boston’s 7-4-2. 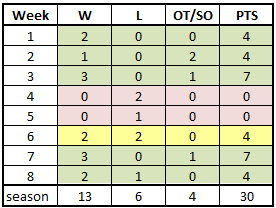 The adjective “anemic” when applied to a low-scoring offense can be overdone, but in Week 8 it fit the Caps.  The Caps posted only five goals in three games, three of those in their first game of the week.  Four Caps shared in the five goals, Jakub Vrana the only Cap with two. Alex Ovechkin, Nicklas Backstrom, and Lars Eller had the other goals.

Nine Capitals posted points in Week 8, Vrana leading in this category as well (three).  Four other Caps had a pair of points.  The most noteworthy of that quarter was Nicklas Backstrom, who recorded an assist with his goal for the week, his assist on Vrana’s goal against Boston on Friday being the 700th of his career.  Backstrom is the 54th player in NHL history to record 700 or more assists, but he is one of only three active players to have reached that milestone (Joe Thornton: 1,097; Sidney Crosby: 813).

It is worth noting here that the Caps got little contribution from the defense in the offensive end.  No Caps defenseman recorded a goal, and the six defensemen who dressed for the week combined for three points (all assists, two by Nick Jensen and one by Brenden Dillon).  As a team, the Caps’ efficiency was off, their 6.0 shooting percentage ranking 25th for the week.

It was not shots allowed that was a problem this week.  Washington allowed only 65 shots in 185 minutes of hockey, an average of 21.1 shots per 60 minutes of play.  What is more, the stinginess in allowing shots was consistent.  The defense allowed fewer than ten shots in seven of nine regulation periods of hockey for the week (twice fewer than five shots) and allowed exactly ten in the other two.  The first two games of the week, in which the Caps allowed 21 and 19 shots, respectively, are the two lowest shots allowed totals in 23 games so far this season.

A noteworthy item here is that the Caps allowed eight goals at 5-on-5.  Big names were out there for a lot of them.  Alex Ovechkin was on ice for six of the eight goals allowed at fives.  John Carlson was out there for four, Evgeny Kuznetsov and T.J. Oshie for three apiece.  And it was not as if they made it up at the other end.  Ovechkin was on ice for one 5-on-5 goal, Carlson for two, Oshie for two, and Kunzetsov for none.

The goalies are hanging onto their combined .900 save percentage by a thread, but it was still a less than expected (or needed) week.  This was one of the rare weeks for the Caps in which the goaltending duties were almost evenly split, Vitek Vanecek getting 100 minutes and Ilya Sansonov getting 84 minutes.  How that came to be was not in the plan, though.

Given his absences this season, Samsonov was sharp in his lone start for the week, stopping 19 of 21 shots in the 3-2 win over new Jersey to start the week.  Vitek Vanecek one-upped him in his first start of the week, stopping 18 of 19 shots in regulation and overtime, and then turning away all three shot he faced in the freestyle competition in the Caps’ 2-1 Gimmick win over Boston in the middle game of the week.

And then the wheels came off the victory wagon.  Boston lit up Vanecek for four goals on 18 shots in 35:43 of work before Vanecek was relieved in favor of Samsonov in the rematch with Boston.  Samsonov allowed one goal on seven shots in 24:15 of ice time in the 5-1 loss to the Bruins.  The result, even with the five goals allowed in Friday’s game, was a reasonable goals against average for the goalie pair (2.60), but a save percentage that left much to be desired (.877).

Was it bad luck?  Perhaps.  The Caps got shots from the players they expect to be productive.  Alex Ovechkin led the club with five power play shots. John Carlson and Nicklas Backstrom each had a pair.  Four other Caps had one apiece for a total of 13 shots on goal.  Eight of those 13 shots came in the last game of the week, the 5-1 loss to the Bruins.  The 13 shots came in 12:57 of power play ice time, so getting shots was not much of an issue. 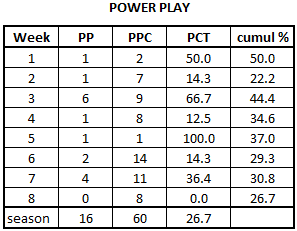 Penalty killing stood out in a good way for the Caps, who finished the week one of five teams with a perfect penalty kill.  They held their three opponents to a total of six power play shots (none for Boston in their first meeting in Week 8) over 12;37 of shorthanded ice time.  It was the third week in the last five that the Caps killed off all their shorthanded situations for the week.  The issue, though, has been consistency.  In the other two weeks, the Caps went 9-for-12 in each (75.0 percent).

What the Caps did in Week 8 on the penalty kill was share the burden.  Of the 12:37 in penalty kill ice time, nine Caps skated at least two minutes, four defensemen (Zdeno Chara, Nick Jenseh, John Carlson, and Brenden Dillon) and five forwards (Carl Hagelin, Nic Dowd, Lars Eller, Garnet Hathaway, and Tom Wilson).  Fourteen Caps in all had shorthanded ice time on their logs, but some of that was likely a product of transitioning from shorthanded to even-strength. 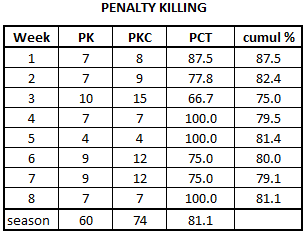 Is it the “Pecaffect?”  Is recently named assistant Michael Peca having an effect in this phase of the Caps’ game?   They have work to do, but since Peca was hired to the Caps’ coaching staff on February 10th, the Caps have won 50.4 percent of their faceoffs, 12th in the league over that span.  Compare that to the 27th-ranked 46.7 percent they posted before Peca was brought on board.

In Week 8 the Caps won 54.2 percent of their draws, fourth-best in the league for the week.  Nic Dowd dominated in all three zones for the Caps, winning 69 percent or more in each zone (more than 70 percent in the ends).  Nicklas Backstrom’s offensive draws look bad (37.5 percent wins) but that was 3-for-8, just one faceoff win under 50 percent.  Backstrom had a fine week in the defensive end, winning 12 of 18 draws (66.7 percent).

It was a low scoring week overall, and the Caps found themselves on the wrong side of small margins in the first and second periods of games.  Second periods returned as a problem area, the Caps allowing half of their goals allowed for the week in the middle frame.  Three of those second period goals came in a span of eight minutes in the Friday loss to Boston, turning a competitive 1-0 Bruins lead into a 4-0 rout after 40 minutes.  It made even the meager third period production – two goals for the week – a bit less meaningful, Jakub Vrana getting what amounted to a window-dressing goal in the 5-1 loss.  There was the Lars Eller third period goal, though, that allowed the Caps to tie Boston in their first meeting in Week 8 and force extra time in their 2-1 trick shot win. 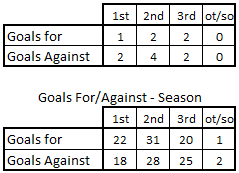 The Caps continue to lag relative to last year’s club, and it is just enough to spell the difference between having the league’s best record at the 23-game mark last season and resting in second place in the East Division (tenth in the league) after 23 games this season.  The power play is one of the few areas in which this year’s club is outpacing last year’s at similar points of the season, but this year’s club also has almost 20 percent fewer power play chances than last year’s at the 23-game mark.  In the “grittership” area, it is worth noting that an increase in credited hits this season has not been matched with an increase in penalty minutes.  Quite the opposite; while this year’s Caps are up 6.3 percent in hits, they are down 11.7 percent in penalties taken and down 15.5 percent in penalty minutes. 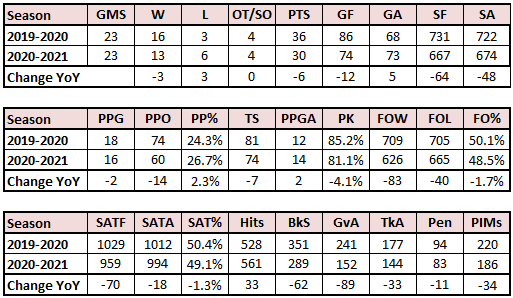 By this point of the season, what is evident is that when the Caps are good, they are quite good, and they have the ability to shut down opponents.  On the other hand, when they are bad, they can be quite bad (four of their six regulation losses have been by three or more goals).  As the Caps approach the half-way point of this abbreviated season, their first priority is going to be finding more consistency of performance that will enable them to peel off wins in succession.  In a division as tough as the East, that will be a tall oder.