The Washington Capitals embark upon the second half of their season series against the Philadelphia Flyers when they host the Flyers at Capital One Arena on Tuesday night.  Fresh off an 8-1 shellacking of the Boston Bruins, the Caps will be looking to post their first three-game winning streak in April.  On the other side, the Flyers are falling out of playoff contention.  Do not let the fact that they are still only four points out of a playoff spot fool you.  They have struggled mightily since March 1st, and the coup de grace might have been inflicted on Sunday when they held a 3-2 lead against the Buffalo Sabres with just over three minutes left in their contest, yet lost, 5-3.

The Flyers are 8-12-3 since March 1st, their .413 winning percentage ranking 24th in the league.  Only New Jersey (7-12-4/.391) and Buffalo (4-15-3/.250) are worse among East Division teams in that stretch.  Scoring has been an issue, their 2.61 goals per game ranking 21st in scoring offense over that span.  While they have had production from their big guns, they have lacked support in this bitter run.  Consider Kevin Hayes.  In 23 games since March 1st, he is 4-5-9, minus-8.  More would be expected from a player in the second year of a seven-year/$50.0 million contract ($7.143M cap hit).  It is not that Hayes has been unproductive overall, his 0.61 points per game for the season being slightly higher than his 0.59 per game last year, his first with the Flyers.  It’s the timing.  Through February 28th, he was the team’s third-leading goal scorer (seven) and point-getter (16) and played to a plus-6 rating.  Since then, though, he is fifth in goals on a club that has scoring issues (four, tied with five other players) and eighth in points (nine).  And his ice time has started to reflect the diminished production.  He averaged 19:01 in ice time through February 28th but has averaged just 17:20 since March 1st and just 16:14 in his last 11 games.  Hayes is 0-2-2, minus-1, in four games against the Caps this season, 7-10-17, even, in 28 career games against Washington.

If Kevin Hayes’ production dropped in the post-March 1st period for the Flyers, Michael Raffl’s production has been almost non-existent.  His in another case of two seasons broken up into the before and after March 1st period.  In 18 games through February 28th to start the season, he was 3-4-7, plus-1, and average d 13:45 in ice time per game.  Since then, though, he is 0-1-1, minus-6, and has seen his ice time drop to 11:28 per game.  And, he was scratched in the Flyers’ 5-3 loss to the Sabres on Sunday, fueling speculation he could be moved at the trading deadline.  However, a contender taking on a 32-year old player with a $1.6 million annualized cap hit, even on an expiring contract would seem to be a stretch other than as ballast in a trade with bigger pieces. Once upon a time, Raffl was on a line with Jakub Voracek and Claude Girous, but that was quite some time ago.  Over his last five seasons he has 38 goals in 287 games.  That after posting 43 in 217 games over his first three seasons with the Flyers.  His role now seems to be geared more to defense and penalty killing as a bottom six forward than as a reliable offensive contributor.   It would seem that if he is not moved at the trading deadline, he will be playing in another city come next season.  Raffl is 0-2-2, plus-4, in one game against the Caps this season and 4-8-12, plus-2, in 28 career games against Washington.

Is it growing pains, or does he suffer from “Carey-itis?”  This is a question that could linger in the minds of the Flyers’ brain trust into the off-season with respect to goaltender Carter Hart.  In his first two seasons, Hart was 40-26-4, 2.59, .915, with one shutout in 74 games played.  He was going to be the goaltender the Flyers were searching for since Ron Hextall hung up his mace and shield…uh, skates and pads in 1999.  There were 28 goalies to dress for the Flyers since Hextall retired, none of them “The One.”  Until Hart.  But this season has been a disaster.  Of 48 goalies with at least 750 minutes played, Hart ranks 47th in goal against average (3.79, ahead of only matt Murray (3.84)).  His .872 save percentage is dead last in that group.  He ranks 48th among 49 goalies appearing in 15 or more games in even strength save percentage (.888, ahed of only Jonathan Quick (.886)).  He has not won consecutive games since the end of January and has won consecutive games only twice this season.  He is without a win since March 18th (0-5-2, 4.03, .850). 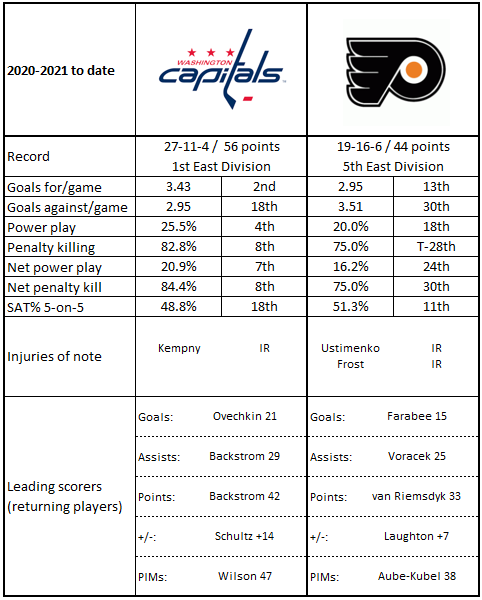 1.  Since March 1st, the Flyers have six players with plus-minus ratings worse than minus-10.  They have four in the bottom-ten in the league over that span – Travis Sanheim (minus-18, worst in the league), Philippe Myers (minus-15), Nolan Patrick (minus-14), and Joel Farabee (minus-13).

3.  Philadelphia gets behind the eight-ball early in this post-March 1st run of woe.  The allowed 34 first period goals (most in the league) and have trailed first in 14 games, second-most behind Buffalo (15).

4.  The Flyers have eight wins since March 1st.  All of them are one-goal wins, four of them in extra time.  They are the only team in that span whose only wins are of the one-goal variety.

5.  The Flyers are one of two teams in the league without a shorthanded goal this season.  Detroit is the other.

4.  One cannot help but think that as successful as the Caps have been over their last 29 games, they would have been more so had they allowed fewer than the 35 third period goals they allowed in this stretch, tied for third-most in the league.

By the time you read this, defenseman Shayne Gostisbehere might be the property of another team.  He’s been waived (unclaimed) and missed four games in the Flyers’ 8-12-3 slump since March 1st, but he still has 11 points in 19 games (6-5-11), leading the Flyer defensemen in that span in goals (six) and points per game (0.58).  He is a minus-8 over that same span, but that is almost Norris-worthy, given that two of the eight defensemen to dress over those games are minus-15 or worse (Philippe Myers/minus-15 and Travis Sanheim (minus-18)).  He is the only defenseman with any power play goals over those 23 games (three) and is, in fact, the only Flyer defenseman with any power play goals this season (four).  Gostisbehere has already passed his goal production of last season (five) and points (12) with his 8-7-15 scoring line to date overall.

If you have ever studied or performed music, chances are you have come across or become familiar with the term “brio.”  The term is usually used as an instruction to a performer, meaning to play with “enthusiastic vigor.”  Does any term capture in fewer letters, let alone words, the style of play of T.J. Oshie?  If you search on images of Oshie, you find that on ice, when he is not celebrating a goal, he has a look of ferocity and determination.  At age 34, that spirit seems undiminished.  Now in his sixth year as a Capital after spending seven seasons with the St. Louis Blues, he has 14 goals in 41 games, his third straight season averaging more than a third of a goal per game and fifth in six seasons in Washington.  His 33 points in 41 games put him on a pace for 0.80 points per game, the second-highest average of his career (0.82 in 2016-2017 with Washington).

What sets this season apart for Oshie is the power play.  He has nine power play goals this season, tops on the club and within two of his career high (11 in 2015-2016 in his first season with the Caps).  If Oshie was to lead the club in power play goals this season, it would be the first time a Capital other than Alex Ovechkin did since Alexander Semin had 17 power play goals in 2006-2007 (Ovechkin had 16).  Oshie has been hot in this regard of late, posting four power play goals in his last eight games, part of an overall strong scoring run of 6-3-9, plus-2, over those eight games.  Oshie recorded his 600th NHL point in the Caps’ 8-1 win over Boston on Sunday night.  He is the 34th player to record 600 or more points since he entered the league in 2008-2009. Oshie is 0-2-2, even, in three games against the Flyers this season, 2-5-7, plus-3, in seven career games against Philadelphia.

These are two teams going in opposite directions.  The Caps are fine-tuning their game and playing for postseason seeding. The Flyer are left wondering what went wrong after an 11-4-3 start through February.  If pride is a thing in hockey, and there is no small number of folks who think it is, the Flyers have incentive to make a game of this.  An embarrassing loss to the worst team in the league, facing a long-time rival against whom they have three straight losses.  For the Caps, it is a matter on not suffering a post-Bruin hangover, spending too much time admiring the mental image of putting up eight goals on a strong, but decimated team.  This could be a good game for fans to watch, to see if the Caps have learned any lessons about taking a team too lightly (within games or against a weak opponent) or losing focus.