The Peerless Prognosticator is ON THE AIR!!! -- Game 42: Capitals at Bruins, April 11

The Washington Capitals head to the road once more after a brief stopover at home when they take on the Boston Bruins on Sunday evening at TD Garden.  Washington is coming off a closer than expected 4-3 win in Buffalo against the Sabres on Friday night, while the Bruins will be playing in back half of a back-to-back set of games after visiting Philadelphia to face the Flyers on Saturday afternoon. 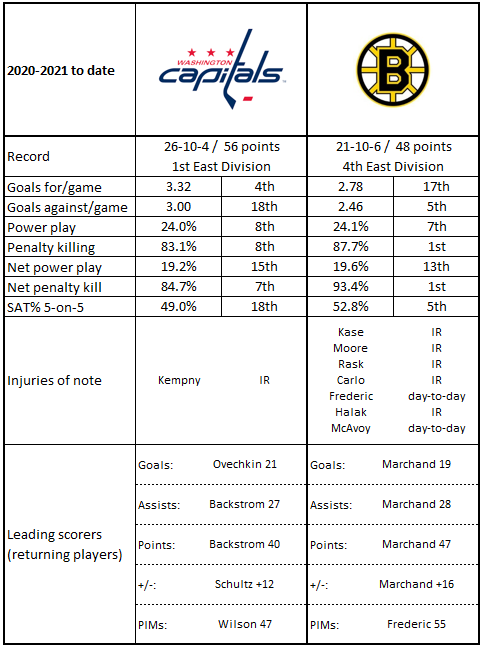 Little has changed since we took a look at these two teams last Thursday, but here are a bakers’ dozen of nuggets we can serve up to amaze your friends and confound your enemies…

-- The Caps are 2-3-0 against the Bruins this season, but they have yet to beat the Bruins in regulation time.  They beat Boston in Washington, 4-3, in overtime on January 30th in Washington and 2-1, in a Gimmick, on March 3.

-- Washington has wins in each of their last three trips to extra time – the freestyle win over Boston on March 3rd, a 5-4 overtime win against New Jersey in Washington on March 9th, and 2-1 over the Devils on April 2nd in New Jersey.

-- The Caps have had their defense and goaltending woes lately, but this is not a team that has had to depend on air-tight defense to win.  In 24 games in which they allowed three or fewer goals, Washington is 21-2-1 (7-1-1 when allowing three goals).

-- After a stretch of road games from February 16th through March 15th in which the Caps went 8-1-0 on the road, the Caps are 3-3-0 in their last six road contests.  The allowed four or more goals in four of those six games and 22 overall (3.67 goals allowed per game).  There is “not air tight,” and there is “open door.”

-- The Caps have fallen into a run-and-gun rut of the road.  They scored four or more goals in three of their last six road games (13 in all) but allowed 15 goals in those three games.

-- Washington is the only team in the league with 100 5-on-5 goals scored this season.  Colorado is season with 93.

-- After allowing four or more goals in three straight games (13 total), the Bruins have allowed three or fewer in their last three games (seven in all).

-- Starting with the 2010-2011 season in which they won the Stanley Cup through last season, Boston is one of two teams with nine 40-plus win regular seasons (Pittsburgh is the other).  That would be all nine seasons over that period in which the league has at least 65 games on its schedule.  The Bruins have been a model of consistency.

-- Boston has employed 32 skaters so far this season.  Only Nashville has dressed more (34).  Colorado and San Jose have also dressed 32 skaters this season through Friday.

-- Boston has only 61 5-on-5 goals scored this season, third-fewest in the league.  This is due in no small part to the Bruins having played only 37 games so far (through Friday), tied with Vancouver and Montreal for fewest in the league, but this is still a surprising result.

-- In the event Tuukka Rask cannot play, the Bruins will likely dress Jeremy Swayman and Dan Vladar as goaltenders for this game.  The two have a combined six games of NHL experience (four for Vladar, two for Swayman).  They have a combined record of 4-1-1, 2.17, .932 in their six games.

-- We will leave you with this question.  Was Peter Laviolette taking a calculated risk in the Buffalo game with this game (not to mention a rough schedule ahead) in mind?  Consider ice times against the Sabres:

At the other end…

Was it a case of giving top line players a bit of a break against a weaker team with all the minutes they have logged this season?  It is for minds wiser than mine to ponder.

A pair of tough losses, a grind-it-out win against a weak team, and now a rematch against a team trying to hang on to the last playoff spot in the East Division.  Boston is not a extraordinarily successful team on home ice (10-5-3/.639 points percentage/fourth in the East), especially for a playoff hopeful.  The Caps actually have a better road record (13-6-2/.667/first in the East and second in the league) than Boston has at home.  But this is the Caps’ seventh road game in their last eight contests, part of a stretch of 11 road games in 15 games, and perhaps the traveling has gotten burdensome.  It is another matter of grinding one out, and this is a difficult team to do that against.