We are the point of the season where season series are wrapping up, and some teams are fine tuning for the postseason while others are looking to the offseason to rebuild their rosters in hopes of being competitive next season.  This is where we are as the Washington Capitals prepare to host the Buffalo Sabres on Thursday in the eighth and final meeting of the clubs this season.

The Caps come into this game with three straight wins, a streak that started with a 4-3 win over Buffalo last Friday, and hold the top spot in the East Division.  The Sabres have lost three of their last four, the last a 3-2 Gimmick loss to the Boston Bruins after tying the game in the third period.

When the smoke cleared on Deadline Day, Sam Reinhart, who appeared on more than one “will he be moved” list, was still a Sabre.  As bad as the Sabres’ season has been, it is hard to fathom what the last month would look like without their leading goal scorer (14), leading point producer (26), one of their top power play performers (6-10-16), and one of two Sabres with two game winning goals this season.

Better days might be ahead for the Sabres, and Reinhart might be a part of it, but it has been a difficult seven seasons for the 25-year old since he was taken with the second overall pick in the 2014 Entry Draft.  In those seven seasons, Reinhart has 440 regular season games played, but none in the postseason.  He has 123 goals over that span (second to Jack Eichel (139), 281 points (second to Eichel (355), 42 power play goals (first), and 16 game winning goals (second to Eichel (25).  But he has also been on ice for 228 even strength goals over those seven seasons (second-worst among forwards to Eichel (349) and has a minus-58 even strength goal differential (worst among forwards).  The trade speculation does not seem to have worn on Reinhart too heavily; he is 3-3-6 in his last ten games.  Against the Caps this season, he is 0-3-3, minus-9 (worst against any team against which he played), and he is 5-7-12, minus-14 (worst against any team against which he played), in 21 games against the Caps in his career.

It has been no picnic for defenseman Rasmus Ristolainen, either.  With 528 NHL games under his belt, he is about to crack the top ten in games played by a defenseman in Sabres history (Henrik Tallinder is tenth with 532), but he has no playoff games on his resume, either.  He has been an amazingly consistent producer for the Sabres in his eight seasons with the club after he was selected eighth overall in the 2013 Entry Draft.  In five seasons preceding this one, only once did he post fewer than 40 points, and that was in last year’s abbreviated season in which he had 33 points in 69 games.  In the last four seasons he posted five goals twice and six goals twice.  He has also been a minutes-eater from the blue line, averaging 25:11 in ice time in five seasons preceding this one.

If Jeff Skinner does not have the worst contract in the NHL, he is on a very short list.  Skinner is in the second year of an eight-year/$72 million contract.  It looked like a good idea at the time, Skinner coming off a 40-goal season with Buffalo in 2018-2019, but in two seasons under the new contract, he is 19-13-32, minus-33, in 98 games.  Of 15 forwards to dress this season with cap hits of $9.0 million or more, Skinner ranks 14th in goals scored with five (Jack Eichel has two, but he appeared in only 21 games to date) and last in points (15).  And even when he does put up points, it hardly matters.  The Sabres are 1-4-0 in five games in which Skinner had a goal this season and 1-4-3 when he recorded a point.  The only statistic that seems to matter with Skinner this season in its relationship to wins is ice time, or lack of it.  Buffalo is 4-3-1 in the eight games in which he skated 12:29 or less, 5-21-5 in the 31 games in which he logged more ice time.  Skinner is 2-3-5, minus-1, in his last seven games, which qualifies as a hot streak in season to date.  Skinner is 0-1-1, minus-2, I seven games against the Caps this season and 12-15-27, minus-6, in 49 career games against Washington. 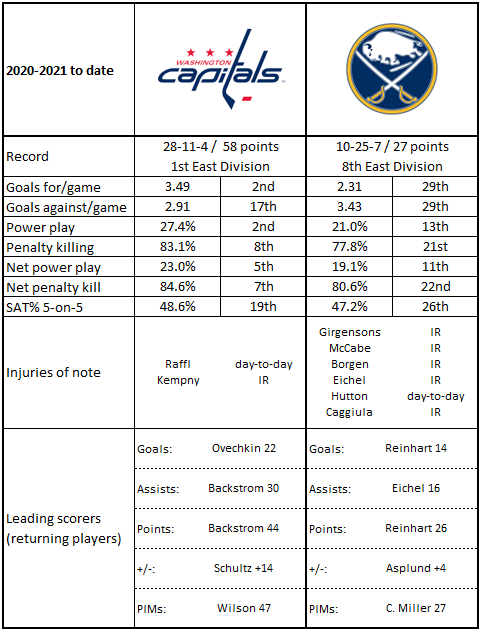 3. The Sabres have scored only 64 5-on-5 goals this season, fewest in the league.

4.  Sam Reinhart’s team leading 14 goals ranks only tied for 44th in the league.

5.  Buffalo has 26 first period goals scored this season, tied for fewest in the league, with Dallas.

4.  The Caps are tied with Colorado and the New York Islanders in one-goal wins on home ice (eight).  They are one of two teams not to have lost a one-goal game in regulation on home ice (Tampa Bay is the other).

You are the number one goaltender for an historically poor team, yet you are 9-6-3, 2.63, .917.  The other three goaltenders to dress in your absence are a combined 1-19-4, 3.57, .891.  It is a career year in your six-year career to date, perhaps the lone bright spot in an otherwise dismal season for a team that has not reached the postseason since 2011.

This is the season Linus Ullmark has had for the Sabres.  He has been remarkably consistent behind a weak defense, allowing more than three goals only times in 20 appearances to date.  The only thing that slowed him down this season was a 15-game absence in March for a lower body injury and a two-game absence for personal reasons in January.  The Sabres went 1-15-1 in the 17 games he missed.  And he has picked up where he left off before the injury.  In eight appearances since coming back, Ullmark is 4-2-1, 2.95, .915.  That record has him tied for fifth in wins over that span and 17th in save percentage among 39 goalies with at least 200 minutes logged. It is unlikely the Sabres would have been contenders had he not missed those games, but that absence does seem to represent the difference between respectability and a lost season.

But now, Ullmark’s availability is in question once more.  He lasted just 4:54 into the Sabres’ Gimmick loss to Boston on Tuesday before skating off with what looked like another lower-body injury following a stop on an innocent shot from Mike Reilly.  In the event he cannot go, and with Carter Hutton injured (his last game was March 22nd), the goaltending duties might fall to Dustin Tokarski, who would be looking for his first NHL win sinc December 2015.  While Ullmark is 1-2-1, 2.68, .895 in four games against the Caps this season, 2-4-1, 2.95, .895 in seven career games against Washington, Tokarski is 0-1-0, 4.14, .879 in one appearance against Washington this season and 1-1-1, 2.57, .916 in his career against the Caps.

The Caps have done what good teams do, pile up points against weaker division opponents.  They swept the eight-game series against the New Jersey Devils, and they have a chance at going 7-0-1 against the Sabres with this season-ending contest.  However, those records are deceptive.  The Caps had six one-goal wins over New Jersey in eight games (two in overtime), and they have four one-goal decisions in seven games against Buffalo (3-0-1, one of the wins in a Gimmick).  They might win, they should win, but don’t think a third straight rout in a foregone conclusion.