The Peerless Prognosticator is ON THE AIR!!! -- Game 40: Capitals vs. Bruins, April 8

After a string of 11 games that the Washington Capitals played against New York City area teams, they get the chance to trade apples for clam chowder when they host the Boston Bruins on Thursday night at Capital One Arena, their first game on home ice after a 2-3-0 road trip.  On the other side, the Bruins come to Washington having faithfully alternated wins and losses over their last nine games (5-2-2).

Part of that slump is due to an upper-body injury suffered in a game on March 7th against the New Jersey Devils that has limited him to one appearance since (20 minutes with six saves on six shots in a 4-3 overtime loss to the New York Islanders on March 25th).  Given his performance in advance of that March 7th game, perhaps it was an lingering injury (2-2-1, 2.98, .896 from February 13th through March 6th), but Rask’s absence left the number one goaltending duties to Jaroslav Halak (although circumstances have changed, which we note below).  He has been competent (4-3-2, 2.61, .908, one shutout since Rask’s injury), but not to a point where the Bruins can feel comfortable heading into the stretch run of the regular season.

Things happen when defenseman Charlie McAvoy is on the ice for the Bruins.  Since February 13th, when the Bruins started their slump after a hot start, McAvoy has averaged 20:05 per game in even strength ice time, tops among all skaters on the team.  It might not be a surprise, therefore, that McAvoy has been on ice for more even strength scoring events than any other Bruin (25 goals scored for, 18 against, both most on the team over that period).

Personally, McAvoy has had a respectable scoring line over the 22 games he played over that span (3-8-11, plus-5), but it compares unfavorably on a points per game basis with his production over his first 12 games (1-10-11, plus-5).  His scoring contributions matter.  Although others like David Pastrnak or Brad Marchand get more attention for their offensive contributions, Boston is 13-1-2 this season when McAvoy posted at least one point, 6-9-4 in the 19 games in which he did not. Part of that is his setting up others for goals, the Bruins being 10-1-1 when he posted at least one assist without a goal of his own. McAvoy, who is listed as “day-to-day” with an upper body injury, is 1-4-5, plus-7, in four games against the Caps this season and 1-9-10, plus-9, in 12 career games against the Caps.

Since February 9, 2017, when he took over as interim head coach of the Boston Bruins (later named as a permanent replacement), Bruce Cassidy has led the Bruins to 181 wins, tied with the Caps for the second-most regular season wins over that period (Tampa Bay: 203 wins).  It is a far cry from the 47-47-7 (with nine ties) that Cassidy had in his first NHL head coaching post, that with the Caps from 2002-2003 to 2003-2004.  He had four postseason appearances in his first four seasons, his Bruins posting a 27-28 record, winning five playoff rounds, including three on their way to a Stanley Cup final appearance in 2019, where they lost to the St. Louis Blues in seven games.  Cassidy already occupies sixth place in regular season wins on the all-time Bruins head coaching list, and he has the fourth-best points percentage in Bruins history (.677). With three more games under his belt at the Bruins’ helm, he will have the best points percentage of any head coach in Boston history with more than 300 games as head coach.  Add to that a Jack Adams Award as top coach in the league in 2019-2020, and it is an impressive record of accomplishment for a coach who had his difficulties behind the Caps bench in his first NHL posting.  Cassidy is 4-6-4 against the Caps in his tenure as Boston’s head coach. 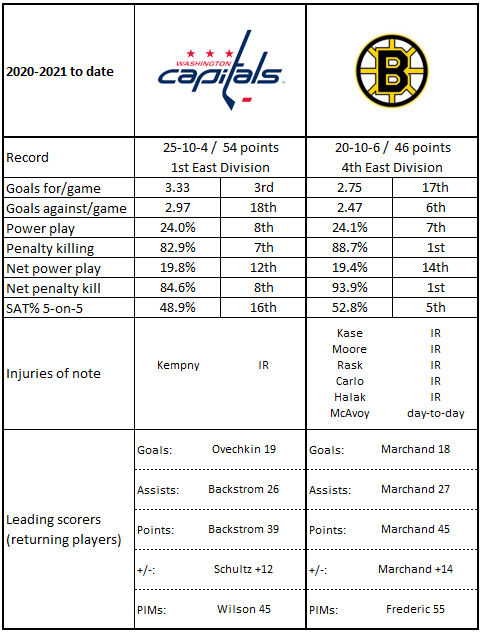 1.  Boston’s net penalty kill of 93.9 percent this season (accounting for shorthanded goals scored against) is the best in the league since New Jersey finished with a 95.4 percent net-PK in 2011-2012.

2.  In the little things done well category, Boston has been a master in the circle.  Since 2005-2006, they have the best overall faceoff winning percentage (51.8 percent).

3.  Teams have trouble getting started against Boston, which has yielded the fourth-fewest number of first period goals this season (23), but they have allowed 35 third period goals (tied for 12th-fewest).

4.  Boston has not lost a game in regulation when leading after two period this season, but their winning percentage ranks tied for 15th in the league (11-0-2/.846) with Vancouver.

5.  One-goal games have not been especially kind to the Bruins, given their status as a Stanley Cup hopeful.  Their 10-4-6 record is the 18th-best winning percentage (.500) in the league.

5.  Washington net penalties (penalties drawn less penalties taken) of minus-19 is second-worst in the league (Anaheim: minus-28).

Who leads the Bruins in game-winning goals?  David Pastrnak?  No.  Brad Marchand?  No.  Trent Frederic?  Bingo.  Three of Frederic’s four goals this season are game-winners.  Those happen to be his only four goals and only three game-winners in his brief career to date.  Frederic is not, and has not been known as much of a goal scorer, not in college (32 games in 66 games at the University of Wisconsin, a good total, but not elite), not in the AHL (27 goals in 127 games with Providence), and not in three seasons and 53 games with Boston (four goals).  He has developed quite a penalty minute record, though – 226 PIMs in those 127 games in Providence and 70 minutes in 53 games with Boston.

It is cliché at this point to describe Nicklas Backstrom’s game as “quiet consistency.”  This season has not been an exception.  He is averaging a point per game (39 points in 39 games), slightly better than his career 0.97 points per game mark.  He has points in 28 of those 39 games, the Caps posting a record of 19-7-2 in those games.  He does not have consecutive games without a point this season.  His points per month have been almost identical over the first three full months – 13 in January, 12 in February, 12 in March.  He has goals against each of the East Division teams he has faced, except against the New York Rangers (no goals, but four points in four games).  He has been on-ice for 19 of the 23 power play goals scored by the Caps this season, not inconsistent with his role as power-play quarterback almost since he first stepped on the ice for the Caps in the 2007-2008 season.

When Backstrom plays in five more games to reach 1,000 in his career, he will rank in the top-50 all-time in points per game among the 350 players with 1,000 or more games played.  And his consistency is not limited to the offensive end of the ice.  His on-ice goal differential at even strength this season is plus-6, third-best among Caps forwards.  He has received votes for the Selke Trophy as the league’s top defensive forward ten times in 13 seasons before this one.  What Backstrom has not had recently is a multi-point game.  He has gone ten games without one, his longest such streak of the season.  For a player with 254 multi-point games in his career (one every 3.92 games over his career), it seems almost like a slump.  Backstrom is 1-3-4, plus-1, in four games against Boston this season and 9-37-46, plus-16, in 44 career games against the Bruins.

Washington goes into this game having played in three straight one-goal games, one of them settled in overtime (2-1-0).  The Caps, like every team in the league, is at a point, given the unique circumstances of this season, where mental and physical strain seem indistinguishable.  This is where the Caps, as a veteran team, suffer the effects of a double-edge sword – they have a lot of experience with the grind of a regular season and its ebbs and flows, but they are also a team with a lot of miles on it, and the wear might be showing.  Boston, a team that is strong in all facets of the game, provides no respite.  Perhaps the home ice, such as it is with no fans, will provide enough for the Caps to take to the road afterward in a good frame of mind.