With Week 13 in the books for the Washington Capitals, they are stuck in cruise control.  Not the breezy cruise control of going 75 miles and hour down a deserted desert highway, but more like doing 35 in the left lane of the Interstate.  Not good, and frankly, rather annoying.  So, what did happen?  Let’s take a look. 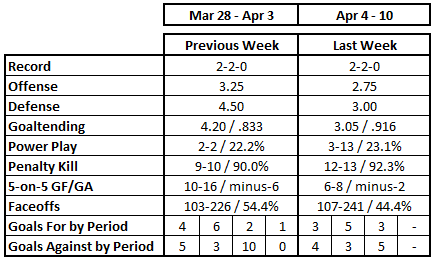 That makes two straight weeks without a winning record.  The Caps had three straight in Weeks 4-6, and with the last two weeks, they are the five non-winning weeks of the year for the club.  They sandwiched a pair of closer-than-they-should-have-been wins against teams out of the playoff running around a pair of tough losses to opponents, either of which they might fact in the postseason.  The losses are part of what is a disturbing trend that is emerging with club, that being their weak recent record against playoff-eligible teams:

It is not a record inspiring confidence going down the stretch, and the Caps will play these three teams a total of seven times in their last 14 games (Islanders three times, Penguins twice, and Bruins twice). 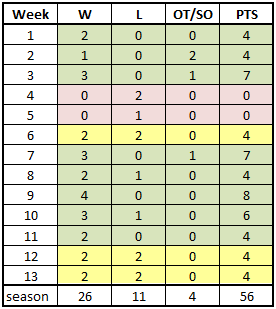 It was a less than average week on offense for the Caps, but they did play two of the stingiest defensive teams in the league in the New York Islanders (2.32 goals allowed per game/second best in the league) and Boston (2.46/fifth).  It does not make the Caps scoring two goals against those teams any less disappointing, just not entirely unexpected.  The 1-0 shutout at the hands of the Islanders was the first time this season that the Caps were shutout, the 30th team to finally buy a bagel (Ottawa is the last remaining team; go figure)., and the two goals combined against the Isles and the Bruins is the lowest consecutive games goal total for the Caps this season.

Alex Ovechkin led the team in goals (three), points (five), and shots on goal (14) for the week.  T.J. Oshie also chipped in a pair of goals as the only other multi-goal scorer for the Caps.  Oshie, along with defensemen Brenden Dillon and Justin Schultz, had four-point weeks for the club.  In all, the Caps had eight players with goals, 13 with points.  It was not a bad week for balance, but what stood out was Tom Wilson being absent from both lists.  At week’s end, he was without a point in five consecutive games.

At the other end, it was good to see Jakub Vrana get a crooked number in the goal column.  It was his first goal in 14 games dating back to March 11th.

The number of the week: “35.8.”  That was the average shots per game allowed by the Caps in Week 13.  Only the St.Louis Blues and New York Rangers allowed more (36.3).  It was certainly an unexpected development for a team that started the week having allowed the 12th-fewest shots on goal per game in the league (29.0).  And, they did against the clubs who ranked fourth (Boston: 32.4), 15th (New Jersey: 29.6), 23rd (the Islanders/29.2), and 28th (Buffalo: 27.9) in the league.  It was no better in shot attempts, where the Caps allowed 196 shot attempts at 5-on-5 in four games, more than any team in the league except Dallas (211).  Their minus-34 in shot attempt differential at fives was tied for fifth worst in the league for the week with the New York Rangers.

It was a difficult week in the defensive end for Caps at the top of the offensive food chain.  Alex Ovechkin – on ice for six even strength goals against.  John Carlson for five.  Dmitry Orlov for four.  Only Jakub Vrana and Daniel Carr were spared being on ice for an even strength goal scored against.

It was a tale of two goalies, and at the end of the week, the tale was muddled.  Ilya Samsonov, who the Caps would seem to like take the number one goaltending job by the throat for the stretch run and the postseason, instead grabbed little but air in going 1-1-0, 4.08, .887 in two appearances.  It was a case of deteriorating performance through the course of games for Samsonov, who posted a .912 save percentage in the first periods of games, .905 in the second periods, and .813 in third periods.  He is stuck in his own rut, going 3-3-0, 3.54, .877 in his last six appearances.  Related to the shot on goal issue in the previous section, Samsonov’s loss to Boston this week was his first loss this season when facing more than 30 shots on goal (4-1-0), although is other numbers in such games does not match his record (3.22 GAA/.908 SV).

Vitek Vanacek is the goalie who won’t go away and accept a diminished role.  He has had his moments of adventure this season, a little too scrambly at times and with issues about rebound control, but there he was in Week 13 – 1-1-0, 2.03, .944.  He did it against the Islanders and Sabres, not among the elite scoring teams in the league (3.00 and 2.14 goals per game, ranked 15th and 31st, respectively entering the week).  But you don’t pick the opponents you face.  Vanecek was consistent across the periods for the week with first/second/third period save percentages of .952/.947/.938 for the week.  He is building enough of a resume (11-4-1 (one no decision), 2.25, .918 in his last 17 appearances) that he might be creating at least a mini-controversy of who gets the net as his own going forward.

The two power play goals that the Caps had in their 4-2 loss to Boston on Thursday was their fifth multi-power play goal game of the season and first since March 16th, when they had a pair against the New York Islanders in a 3-1 win in Washington.

Alex Ovechkin had a pair of power play goals in Week 13, T.J. Oshie recording the other one.  The Caps had a tight circle of power play shot makers, five players in all recording shots on goal with the man advantage: Ovechkin (four), Evgeny Kuznetsov (three), John Carlson (three), Nicklas Backstrom (two), and Oshie (one).

There was a symmetry in the Caps’ power play in Week 13.  Thirteen chances, 13 shots on goal, but 13 shots in 16%6 of power play ice time is a shots-per-minute number that could be improved. 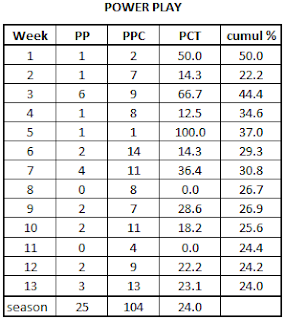 The Caps allowed only one power play goal on 17 shots taken by opponents on the power play for the week, and doing so in 22:45 of penalty killing ice time is a good shots-to-minutes ratio.  But more than 20 minutes spent killing penalties is a result not hoped to be repeated. 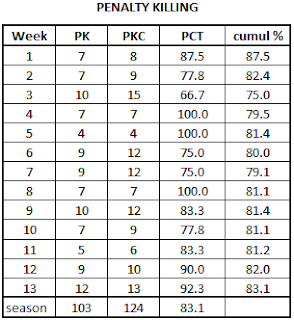 It was almost a uniformly bad week in the circle for the Caps (we will get to the almost part in a moment).  A team that had been making some recent improvements on one of the most basic plays took a big step back in Week 13.  Their 44.4 percent success rate was fourth-worst in the league for the week and was almost five percentage points lower than the 49.2 percent with which they came into the week.

It was worse by zone.  The Caps won only 40.5 percent of their offensive zone draws for the week, and that number was pulled down by Nicklas Backstrom (40.0 percent), and Evgeny Kuznetsov (29.6 percent), the key contributors in the offensive zone.  The Caps did better in the defensive end, finishing only a couple of wins short of 50 percent on 81 draws.

Now, to the “almost” part.  If the Caps got one thing right, it was “specialty” faceoffs.  Nic Dowd took only three offensive draws, but took 40 in the defensive end, winning 18 (45.0 percent), putting him two wins short of a 50 percent week.  On the other sie, T.J. Oshie took only three defensive zone faceoffs, but he took 12 in the offensive end, winning eight, the only Capital taking more then ten offensive zone draws who won more than 44 percent. 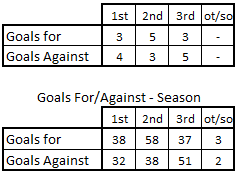 The Caps are starting to track closely with their 2019-2020 counterparts, and not in the best way.  Consider the records.  Through 41 games last season, the Caps were 27-9-5, the best record in the league, but only 3-4-0 in the seven games leading up to that point.  This year’s club is 26-11-4, fifth-best record in the league and best in the East Division, but yes, just 3-4-0 in their last seven games.  And we know how last season worked out.  One thing to think about is effectiveness versus efficiency.  The Caps have only seven fewer goals scored overall at this point compared to last season, so on a goals per game effectiveness basis, things are not much different.  But are they making defenses work hard enough?  They have 169 fewer shot attempts at fives at this point compared to last season, roughly four per game or one per period.  It does not sound like a lot, but the margins for success and failure in the league are thin. 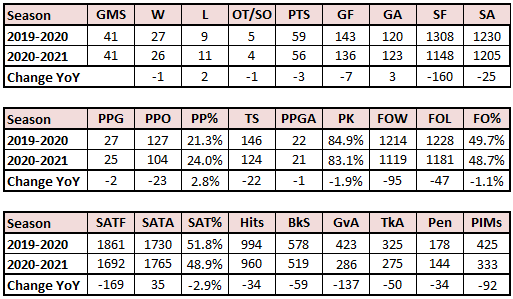 The Caps are treading water, perhaps the combination of the unique nature of this season (late start, COVID threats hanging over teams), what would normally be the mid-season doldrums, and the Caps age issues) causing a lethargic walk through this part of the schedule.  If so, it is something that the Caps need to snap out of.  In their last 15 games, starting Sunday in Boston, the Caps play eight against currently playoff-eligible teams.  Add to that a pair of games against the New York Rangers, who have given the Caps fits this season, and it is a difficult stretch run to come.