“Permanence, perseverance and persistence in spite of all obstacles, discouragements, and impossibilities: It is this, that in all things distinguishes the strong soul from the weak.” 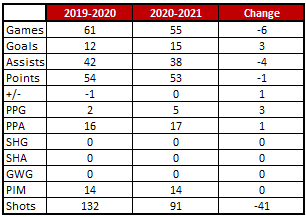 Only once in 14 seasons has Nicklas Backstrom averaged less than 0.85 points per game, and that was back in 2010-2011, when he averaged 0.84 points per game.  His 0.96 points per game in 2020-2021 was the eighth time in those 14 seasons in which he averaged at least 0.95 points per game.  He might have finished the season with his sixth career season averaging at least 1.00 points per game.  He had 52 points in 50 games before going 1-1-2 in his last five games of the season to fall just short.  It might have been a case of a hip injury he suffered finally caught up with him.  It would be a tough stretch run for a player who was 13-25-38 in his first 36 games, posted points in 27 of those 36 games, and led his team to a 23-9-4 record in those 36 games.  He was even better early on, going 5-8-13 in his first nine games as Tom Wilson missed two game, Lars Eller missed two games, Alex Ovechkin missed four, Evgeny Kuznetsov missed five contests, and Dmitry Orlov missed five games.

A lot of good things happened when Nicklas Backstrom was on the ice this season, but there were bad things that tunneled into his game.  He led all Caps forwards in goals scored against on ice at even strength (42).  It was an improvement on a per-game basis over last year (0.76 goals against per game versus 0.97 last season).  His plus-6 goal differential at even strength was tied for fifth-worst in 12 seasons since the NHL began recording these statistics.  Backstrom also had the second worst faceoff winning percentage (48.3 percent) of his career and worst since his rookie season in 2007-2008 (46.3 percent).  What was especially disappointing here was his 46.5 percent winning percentage in power play situations (60-for-129).  And there was also the two goals on 34 shots in his last 22 regular season games (5.9 percent shooting) after posting 13 goals on 57 shots (22.8 percent shooting) in his first 33 games.

Odd Backstrom Fact III… For the second consecutive season (and second time in his career) Backstrom did not have a game-winning goal.

Game to Remember… April 15, 2021 vs. Buffalo.  Not even a loss to the Buffalo Sabres in mid-April could diminish how meaningful that game in April was to the career of Nicklas Backstrom.  He pulled on a Caps jersey for the 1,000th time in the regular season in his career, the second player in team history to dress for 1,000 games as a Capital.  The team honored him in pre-game warmups as every player wore his number “19.”  He was honored by the team before the puck drop.

And, in typical fashion, he got on the score sheet with an assist on a second period goal by Anthony Mantha scored at 6-on-5 with a delayed penalty having been called on the Sabres. Since coming into the league in 2007-2008, Backstrom is one of 16 players to have appeared in at least 1,000 regular season games.

Game to Forget... February 20, 2021 vs. New York Rangers.  Backstrom started the season on fire, going 8-12-20 in his first 15 games, and he went into a game against the Rangers on a five-game point streak and having been held without a point only twice in those first 15 games.  That productive run was blunted when he was held off the score sheet, failed to record a shot on goal, and was minus-2 in 17:20 worth of work.  It was the first of a seven-game stretch in which he was “only” 2-3-5.

Postseason… It was not a vintage Backstrom postseason, no doubt influenced by a hip injury he suffered late in the regular season.  He finished 0-1-1, minus-2, for the second consecutive year in the playoffs.  Even with the injury, Backstrom gutted it out, averaging 20:53 in ice time over five games played, third among forwards, while his average shift time (0:49) was fourth among all skaters.

One thing that diminished on a game-to-game basis against Boston in the opening round loss was his individual shot attempts-for percentage at 5-on-5.  It was 57.8 percent in Game 1 of the series, the Caps lone win, but was under 50 percent in the remaining four games, all Bruin victories.  And, he was on ice for only one even strength goal scored by the Caps in the series, a problem the top line had generally (Alex Ovechkin and Anthony Mantha also were on ice for only one even strength goal in the series).

Injury and age in any player, even one as consistently productive as Nicklas Backstrom has been over his career, begs the question, will his production now start to decline?  Backstrom’s game has never been predicated on the kinds of skills one would expect to diminish as a player gets to his mid-30’s – speed, velocity of shot, physical strength used with an edge.  His game has been more cerebral, an ability to bend the pace of a game to a one of his liking and an ability to see several moves ahead.  One could reasonably expect that these skills would diminish more slowly than the others.  One thing that is of concern is the scoring that opponents have at even strength with Backstrom on ice.  The 0.76 goals against per game at even strength is an improvement over last season (0.97, the worst of his career), but it is the third straight year he has been over 0.76 goals against per game.  Goals against at evens are not the problem of a single player, but for one who was often thought to be deserving of more attention as a potential Selke Trophy finalist as best defensive forward in the league, this bears some watching going forward.

Backstrom’s remarkable consistency extended to his point totals against opponents in 2020-2021:

It has been the signature aspect of his game for more than a decade.  But what hovers over his present situation is the hip injury in the late stages of the regular season and that eroded his production as the season wound down.   Even with the hip injury, Backstrom was 0-1-1, minus-2, for the second consecutive postseason, and he is without a goal in his last 12 postseason games.  If the Caps are going to return to the short list of Stanley Cup contenders in 2021-2022, Backstrom’s regular season numbers, especially in terms of games played, will not matter in the larger scheme of things, which is to turn those disappointing postseason numbers around.