“Reputation is an idle and most false imposition; oft got without merit, and lost without deserving.”
-- William Shakespeare (Othello, Act II, scene iii)

We tend to be on the wordy side in this space, but if we were to quote every instance in which Tom Wilson was characterized as a dirty player, a player who targets opponents, a player who should be suspended for every hit he makes, we could fill a library.  True, Wilson does play on the edge sometimes, perhaps more often than your average player, and that means crossing that line sometimes.  And there are those who take the time to chronicle every instance.  What it means is that Wilson, now an eight-year veteran with 569 regular season and 82 postseason games on his resume, has a reputation.  And one wonders if that reputation is the dark lens through which fans of opposing teams see him and those in the NHL Department of Player Safety evaluate every incident within a time zone of crossing the line of “dirty” play with a tendency to “over-suspend” him for cases that would draw a far lesser punishment if committed by other players.  That is a discussion for another time, except to say that his “reputation” casts a long shadow over a career over which he has established himself in the top echelon of power forwards – players who not only have a physical edge, but who perform at a high level in a variety of situations. 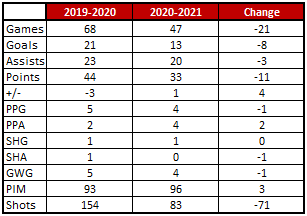 Fearless’ Take… Tom Wilson continues maturing as a player who is multi-dimensional.  Many will look at a single dimension and try to pigeon-hole him as a throwback to the brawling ‘70’s, but he finished tied for fifth in goal scoring for the Caps this season (13), tied for fifth in assists (20), fifth in points (33), fourth in power play goals (four), tied for fifth in power play points (eight), tied for second in game-winning goals (four), fourth in credited hits (105), fifth in hits per 60 minutes (8.10), fifth among forwards in blocked shots (25), and sixth among forwards in takeaways (20).  He averaged more than a minute per game on power plays (1:40) and on the penalty kill (1:35).

Odd Wilson Fact II… While his scoring did not change much after his seven-game suspension in March for his hit on Boston defenseman Brandon Carlo, his penalty minutes did.  In 21 games before the suspension, he compiled 25 penalty minutes (1.19 minutes per game), including 10 minutes in the game against Boston in which he earned his suspension.  But in 26 games after the suspension, he compiled 71 minutes (2.73 minutes per game).  However, 43 of those 71 minutes were recorded in his last five games of the regular season.

Odd Wilson Fact III… The Caps were 7-0-0 in the seven games Wilson was suspended in March.

Most fans might remember this as the infamous game in which Tom Wilson took exception to New York Ranger players taking liberties with goalie Vitek Vanecek in the form of a series of whacks meant to separate Vanecek from the puck in his crease.  What ensued was unpleasant…


But lost in the chaos in that second period moment, which earned Wilson a pair of roughing calls and a ten-minute misconduct, was that he had an otherwise productive game.  He earned an assist on a goal by Conor Sheary that gave the Caps a 2-0 lead late in the first period.  He logged 1:44 in penalty killing time (he was not on the ice when the Rangers scored their lone power play goal of the contest), apart from the penalty he was rather tame (one credited hit), and he put the final touch of frosting on the cake with an empty net goal in the last two minutes of the contest to finish with what would be his ninth and last multi-point game of the season.  He would be one of four players this season to record a multi-point game while charged with 15 or more penalty minutes, and he would be the only one to do it while logging less than 12 minutes of ice time (11:49).

Two nights after that memorable game, the Caps and Rangers faced off again to wrap up the two-game set at Madison Square Garden.  It would be a memorable night for T.J. Oshie, who would record a hat trick on the day after his father’s passing.  But for Tom Wilson, it was a game to set aside.  Ten seconds into his first shift of the game, in the first minute of the first period, he answered the call of Brendan Smith to settle scores from the previous game.  Wilson would skate only three more shifts, retiring for the evening after an early second period shift as he left the penalty box after earning a ten-minute misconduct late in the first period.  He suffered an upper body injury that limited his evening to 2:36 in total ice time, by far his lowest of the season.  He left, unsurprisingly, without a mark on his line of the scoresheet except for the 15 minutes in penalties he earned.

Postseason… One goal, one assists, a minus-3 rating in five games.  It was the second consecutive disappointment of a postseason for Wilson, who finished the 2020 postseason 1-2-3, minus-5, in eight games (although his lone goal in last season’s playoffs was a game-winner).  Wilson’s performances in postseasons to date have been less than impressive.  He was 5-10-15, plus-11, in 21 games of the Stanley Cup run in 2018, but otherwise he is 8-7-15, minus-15, in 61 career postseason games.

Tom Wilson has a reputation around the league for being undisciplined, rambunctious, and prone to coloring outside the lines.  Okay, let’s face it, if you’re not a Caps fan, chances are better than even that you believe him to be a dirty player.  It looked as if he was playing himself out of that reputation coming into this season, or at least diminishing it.  But he might not have done himself any favors with his suspension in March or his ill humor against the Rangers in two games in May.  To that add that his production over the last two seasons has plateaued or even slipped a bit, and one could be forgiven for expecting Wilson should be – must be – a more productive player inside the rules when the puck drops on the 2021-2022 season.  It was not a bad season for Wilson by any means, but one is left with the odd feeling that there should have been more meaningful results.